This section contains beliefs all on a common theme: Dragonflies sew your lips shut. 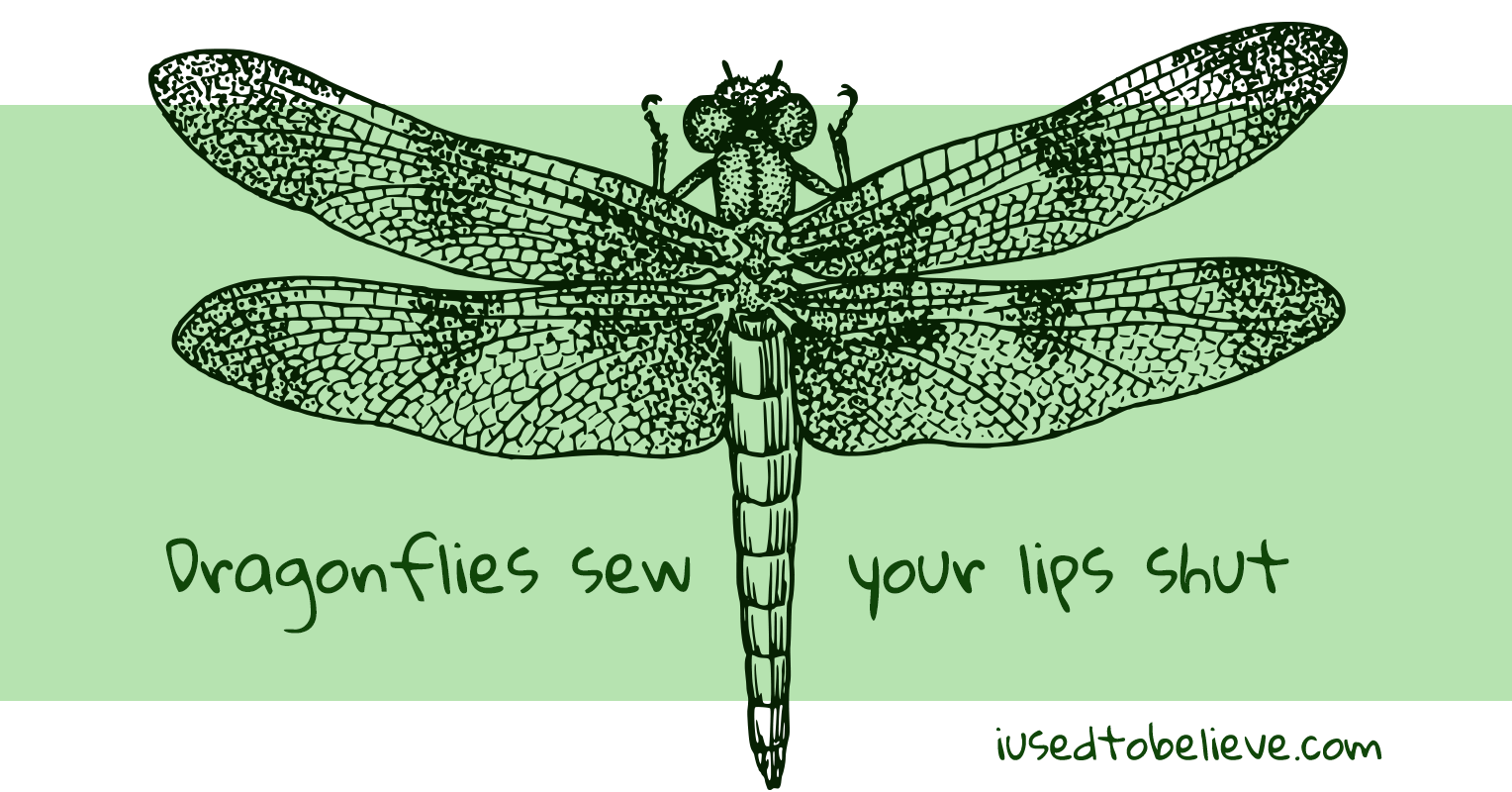 I used to believe that those tiny dragon flies with the blue body were dangerous. My grandmother told them they were called 'darning needles'. She also they have been known to sew up peoples mouths, especially if they talked too much.

Two things really. First was from my Grandmother, that Dragonflies were in reality spies for children with bad language and when hearing a dirty word uttered by a child, would respond by sewing the child's lips together! Second from my Mother, was that Grasshopper's would spit tobacco juice when picked up. I still get uneasy when I see a Dragonfly!

Well my moms dad told her that if she swore around dragonflies that they would sew her and her brothers mouth shut. I'm suprised that anyone would believe that!

when i was 10, i believed that if i was stung by an insect called a dragonfly, it would automatically sew up my lips so i couldn't open my mouth. Since the dragonflies looked like long sewing needles, that's why my older brother told me, to scare me. I didn't get over it until I was 15.

My grandmother used to tell me that dragonflies would sew my mouth shut and thats why they looked like sewing needles with wings. So I would cover my mouth when I saw one.

When I was little my mom told me that dragon flies were called "sewing needles" and if I was a bad girl they would sew my mouth closed.

I used to believe that dragon flies had little sewing needles in their mouths, so if you said something bad, the dragon fly would sew your mouth shut!! I was really scared of them. After all, that's why they were called dragon flies.

My grandma had told me that if I lied around a dragonfly they would sew my lips together. I was always scared of dragonflies even if I wasn't lying.

One summer when I was 5 years old I was visiting my grandparents with my younger sister. Gramma had brought us from Alberta to Nova Scotia on the train. One thing I remember is that there were many dragonflies which I was afraid of because my Grandfather told me that if I ever told a lie, that a dragonfly would come and sew my mouth shut.

My Papa used to tell us that we grew potatoes in our ears if we did not keep them clean, and also that dragon flys would sew our lips shut if they landed on us !

I used to believe that dragonflies could sew your lips together so that you couldn't eat.

Where I grew up, we called dragonflies "sewing needles". My aunt told me that they were called that because if they came near you, they would sew you up. Like sew your arm to your side, your hand to your face or even sew your mouth shut. I would run screaming every time I saw one.

For a very long time I was scared to death of, and would run away from Dragonflies, I was told if I spoke they would come sew your mouth shut! Now I love them all kinds big and small. I will let them land on me and just watch them intently. (Love them)

My older brother and sister told me that dragonflies could sew my mouth and eyes shut. I was terrifed of dragonflies and would fun for safety evey time I saw one.

When I was a young girl I was told by my older friend that I should be very careful when I saw a dragonfly in the area because they will take a blade of grass and sew our mouths closed.

i used to believe that drangonfly's would sew your mouth shut

i used to believe that dragonflies would sew your mouth shut.

when i was little i used to talk alot.so one day my dad told me that when ever a dragon fly flew by and i was talking it would sew my mouth closed!

I used to believe that dragonfilies could sew your lips closed.