Mirrors are windows to other worlds

This section contains beliefs all on a common theme: Mirrors are windows to other worlds. 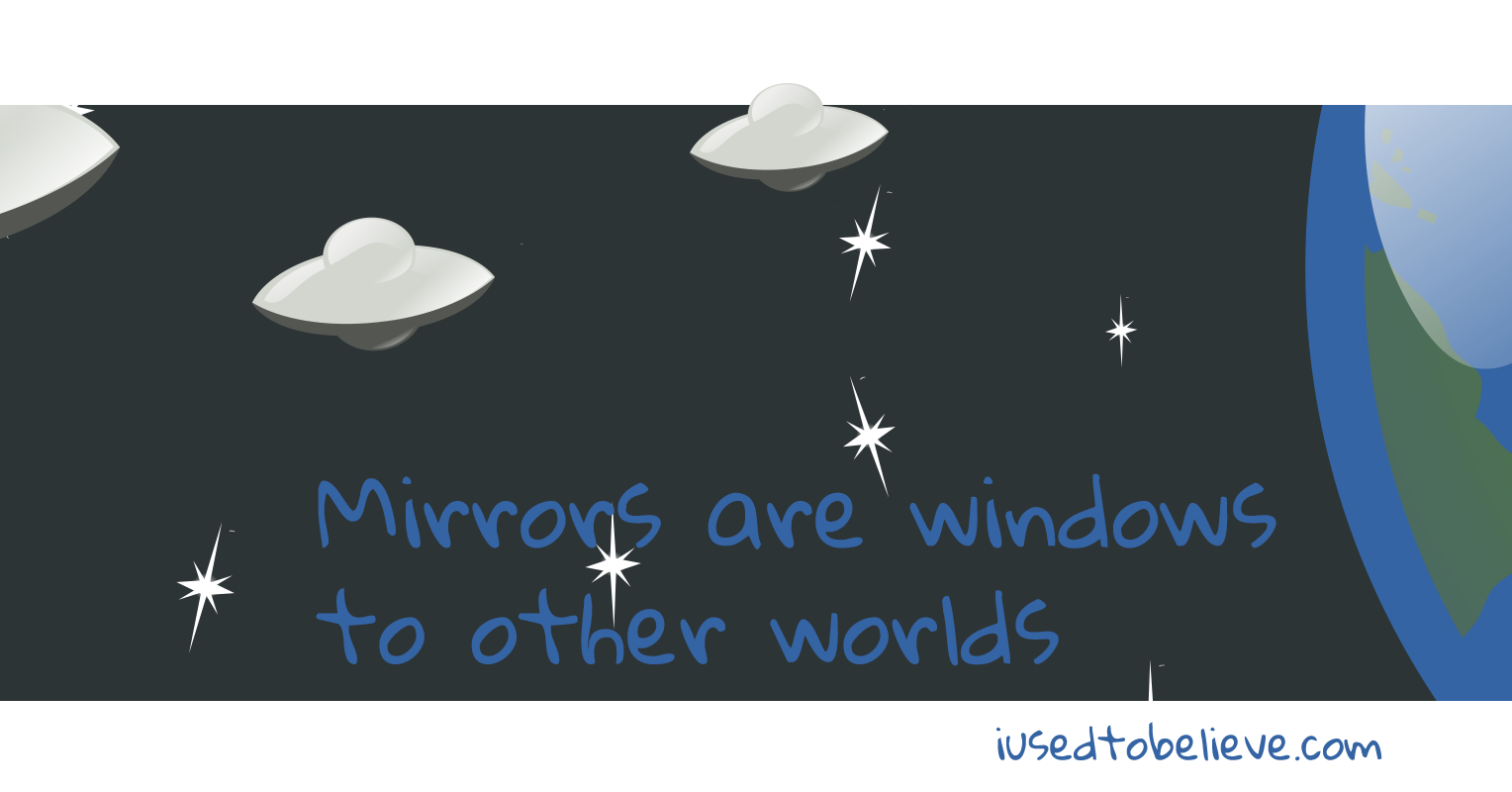 Show most recent or highest rated first or go back to mirrors.

I used to believe that if you swallowed a fly or a bug that it would crawl to your heart and kill you. So whenever I was cycling or running I would always keep my mouth shut.

I used to believe mirrors were really doors to other worlds and I used to spend hours playing with "myself" (the "me" from the other side).

when mirrors showed the opposite way like d becomes b i figured that it must be because the parallel universe existed in it. i was afraid that i might get sucked in to it and my evil twin from the other dimension will take over my life so when i looked in to mirrors i used to stay as far as possible away from them! ( i was 8 then)

when i was little, i watched rugrats, and they showed tommy thinking that there was another world on the other side of the mirror. i beleived him. i didnt want to go in that world because it was creepy so i stayed away from mirrors for 2 weeks

mirrors are normal dont b creeped out!!!

when I was 5 I thought that whenever I looked in the mirror, I would see into a paralell world. The equivalent of me on the other side became one of my best friend in the following years.

When I was little...about 6 years...I thought that mirrors were diffrent dimensions and that my reflection was and evil me...just copying my every move so I wont know he was tryin to kill me...so one day I put some gum on the counter next to the bathroom mirror,looked in my closet and my gum was gone...so I cursed at my reflection for an hour...later I realised that my bro took it.

still tryin to find me gum....

I used to believe that whenever you looked in a mirror you were really looking at a person in a different world that looked just like you.

When I was 7 and 8 years old, I used to believe that my reflection (image) in a mirror might be another "me" in a world identical to this one (but opposite), thinking identical thoughts, and I was his reflection as he was mine. In his eyes, I could understand and 'see' what he was thinking, because I was thinking it myself.

I thought my echo was his voice.

I don't know why, but I was terrified of reverberation-type echoes in restrooms until I was 8 or 9, and I used to think your 'shadow' was a part of you which could be lost, like in Peter Pan (e.g. you only had one).

But mostly, I remember the mirrors. I'd stare into my eyes thinking his thoughts. My mother thought I was vain because I spent so much time at the mirror.

I used to think there was another world inside the mirror where Mirror-Me lived and I was always scared she would jump out, kill me, and take over my life.

At one point in time, I believed that on the other side of a mirror was another world. I used to have nightmares about someone from the other side sneaking through, and I also used to believe that if I moved fast enough, that my reflection wouldn't be able to follow me and I could slip through. As I got older, I realized that I would have to travel faster than light to accomplish that.

when i was little i belived that mirrors had an evil women in it and if you said this wierd ryhme when it is all dark she would come an get you form your bed an take you to her mirror world and you would neaver be able to get out so after i found this out i did not look at a mirror directly for a week i dare to think what i must of looked like that week!!

I used to think that when I would look in the mirror the person I was looking at was the evil version of me. I was scared to be in a closed room with a mirror for too long. I thought they had lifes and on the other side they would do everything oppisite of what I would do except they were bad! And they were plotting to kill me!

A long time ago my stepfather in response to finding me having a staring contest with my reflection in the mirror told me about a prince (Or a count I can't really remember) who was so obsessed with his reflection, (He wasn't vain, just curious) that eventually he was dragged into the mirror-world....needless to say I still have moments where I stare in the mirror expecting my relection to do something on it's own.

I used to believe that there are total two worlds existing. The first one is infront of the mirror and the other one is inside the mirror and I always used to dream that one day I would definitely get a chance to go inside that other world and I would meet myself.

Me and my sister used to believe (and hope) that if you hugged in front of the mirror, it would get soft and you could go through it to the Hugga Bunch land.

After watching the Poltergueist 3 I started to believe that you could go on the other side of the mirror but that was the bad side. So when I saw my reflection in the mirror I would yell at it and I waited for it's face to turn bad like in the movie! I am still waiting for my reflection to turn evil!

I used to believe that mirrors were like a portal that lead you to a world that was the opposite way round. (because mirrors reflected the opposite. Until i tried walking into one.