There are monsters living under your bed

This section contains beliefs all on a common theme: There are monsters living under your bed. 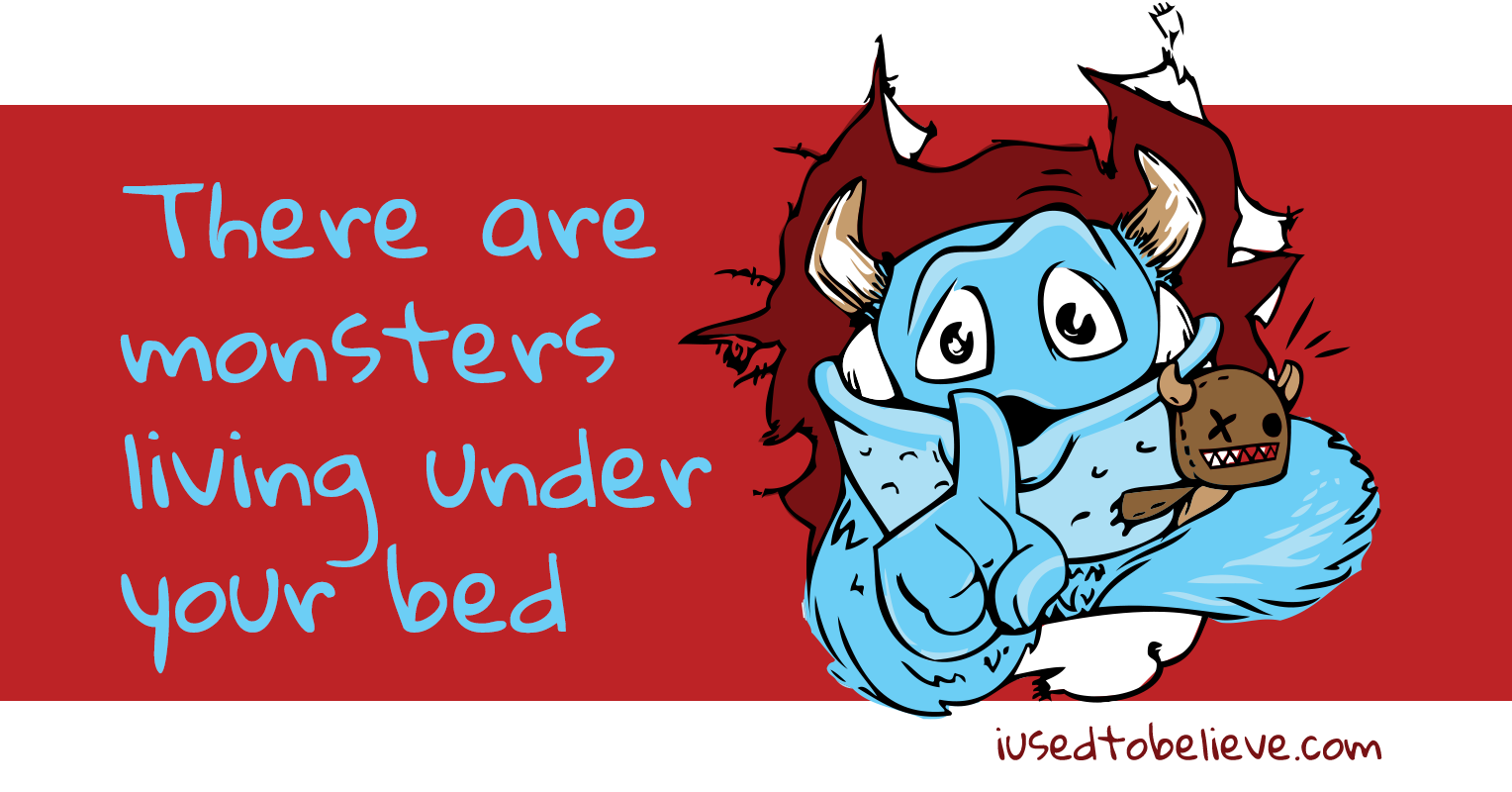 Show most recent or highest rated first or go back to under my bed.

I used to belive that under of the bed there were many monsters ande they would pull my foot in the middle of the niglit.

I used to believe that a monster was waiting under my bed at night for me to fall asleep and that he would jump on my bed and eat my hand or my leg.

When I was a little boy I use to believe in monsters. I was afraid of them. One day,I was having a nightmare and my parents came to see me. I told to them my nightmare and my father left and he came back one minute later with our dog. He was ask to him to look under my bed. He didn't find anything. I stopped believing in monsters but I am afraid of robbers now

When I was little,I used to think that at night in my bedroom things were real monsters or people and I was really scared about that in the dark and when I turned my light on,the monsters has transformed into my clothes on my bed.That's the reason why I used to sleep with my lights on!

When I was a little girl I was be scared of the dark because I think the monster would catch my foot and traight they would kill me. One day my sister was hidding underneath my bed and when I went sleeping she caught my foot, I shouted. My sister couldn't stop laughing. Since this day I always check underneath my bed.

when I was younger , I used to believe that there was a monster under my bed

I used to believe that If I move my arm/hand to out of the bed the under bed monster will hold my hand.

When I was younger, I used to believe there was monster under the bed

When I was little I believed that a night a monster will came and kill me.❤️🥺

When i was child, i always believed that there were monsters or ghosts under my bed and that if i took my foot out of the blankets or out of my bed, they would grab my foot and that terrified me.

When I was a kid I used to think that under my bed there were ghosts and that if I took my foot out of the covers, those ghosts could catch my foot.

When I was a child I believed that there was a ghost under my bed. I was so scared that I went to bed early. Every time the bed moved I thought it was the ghost. One day I looked under the bed with great fear and I was very scared because there was a toy that looked like a ghost. I never did it again until I grew up.

When I was younger, I used to believe that there was a monster under my bed and when my feet were out from the blanket the monster ate all my leg.

when i was younger,i used to think there was a monster Under my bed

When I was yonger,I used to believe when the monter under my bed

I used to believe that if I farted in bed, a monster would pop out through the covers and tickle me.

I believe that when its dark in my room that when my parents would leave the room and I turned off my light everything would get spooky and under my bed there would be a monster that would look so CREEPY and would try and eat me when I was 4 years old since this was SCARY to me I put a bunch of ribbon on my body and this is why I now keep a flashlight in my room so when the lights go off I can put the flashlight on.

When I was little, I thought that when it was dark in my room, there was a monster under my bed.
One day, I went to sleep, I ran to my bed to hide and I never looked below my bed because I was scared it would do something to me and that he would kill me.
Now I dream quietly in the dark. I tell myself I had a lot of imagination, and that it's not real!

When i was liittle girl, i used to believe, i think that below my bed there was a monster who was going to catch me during the night,
So I did not dare to take my foot off the cover so as not get caught before going to sleep. I always look below the bed to see if it was there and finally there was never anything to catch me and no one was under the bed,
I also think that playing them like in toy story is alive but it's another story,