This section contains beliefs all on a common theme: If you pick your nose your brain will fall out or cave in. 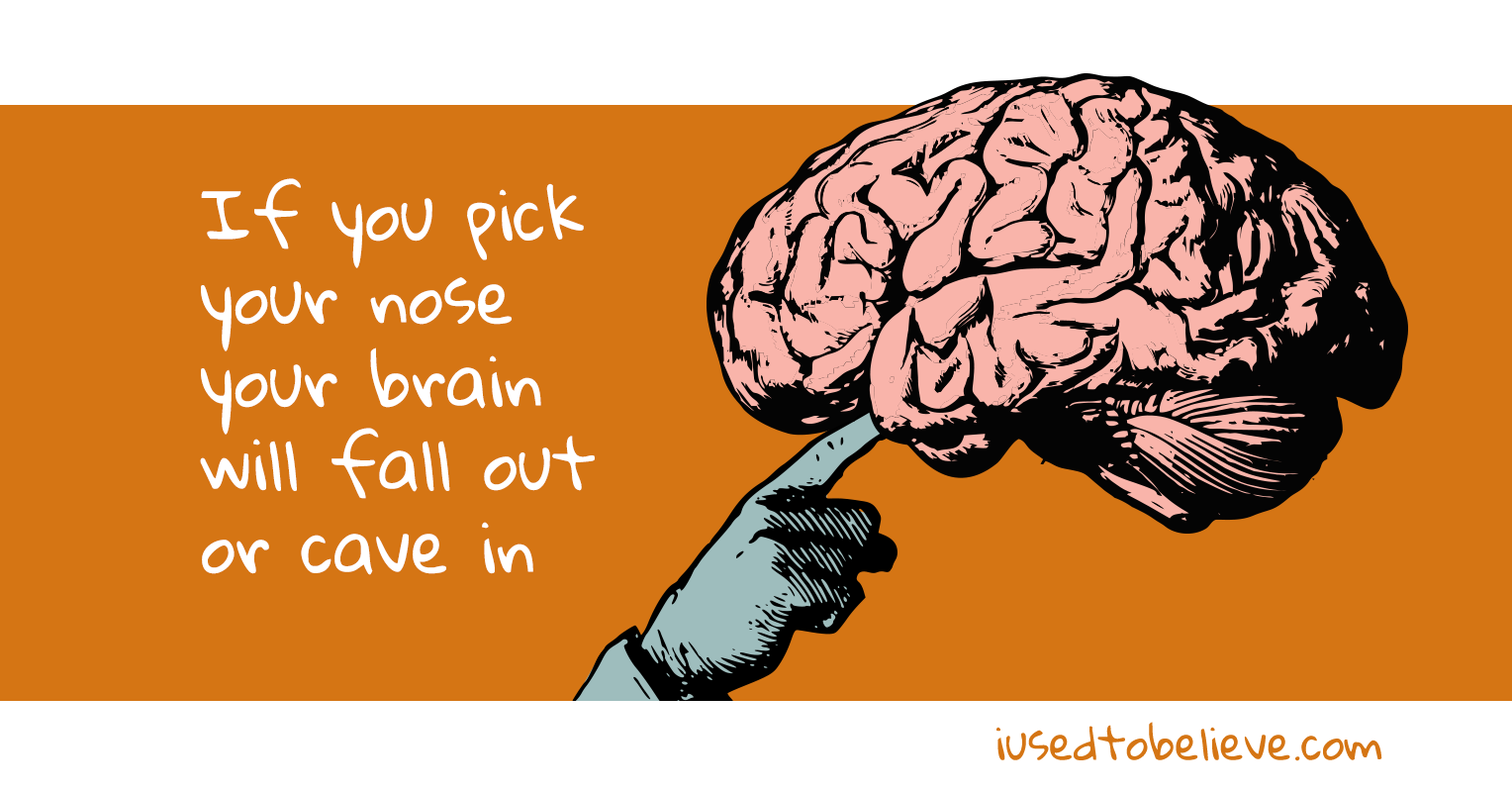 Show most recent or highest rated first or go back to picking my nose.

When my sister was about 6 or 7 (i was 15) i told her that if she kept picking her nose her brain would fall out. Well, she didn't believe me but a few days later i heard her screaming she ran to me with a bloddy nose and told me her brain was falling out!! she never picked her nose again :)

My girl told her younger siblings that if they pick thier nose, their brains would come out, because the egyptians did it to prepare someone to be mummified.

When my nephew was very young he persistently picked his nose. I told him that if he didn't stop, his head would cave in. He started crying hysterically, even his mum couldn't stop him. I felt a bit of a prat trying to explain what had happened, considering I was 26 at the time and should have known better!

when i was little my mum used to tell me if i picked my nose too much my brain would fall out!!! think it did

when I wuz like 4 i had a friend that used to pick her nose, ALOT. So my mom finally got disgusted of it and told me to tell her that if she picked her nose her head would cave in. So the next day when I went to preschool i told her exactly what my mom said to me, and we cried, and cried, and cried. Cuz as far as we knew, she wuz gonna die. Pretty gulable eh? It wasnt till a week l8er that her mom called my mom and asked exactly how her daughter got this thought in her head.

I used to believe that if you picked your nose then your head would cave in!

When I was little my mum told me that if you picked your nose too much that your head would cave in (as if snot helps the head keep its shape!!) so I used to imagine that all these people who picked their noses too much would be walking around with a perfect head, but instead of having a nose that points out, that their noses would point in!!

when i waz little i thought that if you stuck yerr finger up yerr nose high enough i could take my brain out. yet no matter how hard i tried i could never reach it! hahah.

I heard a mother in the street tell her young son not to pick his nose...because his head would cave in.

my mum once told me if you picked your nose your brains came out!!!!

I used to believe that when you picked your nose, the booger was a piece of you brain and eventually you would pick our your entire brain and die.

I was told when i was little, that if i picked my nose,
i would be picking my brain and it would fall out my nose.
:(

My mom used to tell me that if I picked my nose my brain would fall out so I told my cousin and between us we came up with the suggestion that if you pick your nose your brain would fall out and bring your ears with it because obviously evrything was connected! After deciding this we also decided that would mean your whole face would fall out of your nose including your nose! As you can imagine this got really confusing!

My 4 yr old son believes that if he picks his nose his brains will come out.

To which he says to me "I got brains in my nose" (if it needs blowing) and if he manages to catch one on his finger its, "I got my brains" and shows me his finger.

My 8 year old granddaughter woke her mother one morning at 4 o'clock and asked if she would answer a question which was "Is it true that if you pick your nose your head will cave in?"

when my sister was little she used to pick her nose. my mom told her one day that if she kept picking her nose her head was going to cave in. ever sense then she hasnt picked her nose once out of fear that her head would cave in.

I used to believe that if I picked continued to pick my nose, my head would eventualy cave in. I was curious so I continued. I still half believe. Indeed, I'm typing this with one hand.