This section contains beliefs all on a common theme: Girls don't fart. 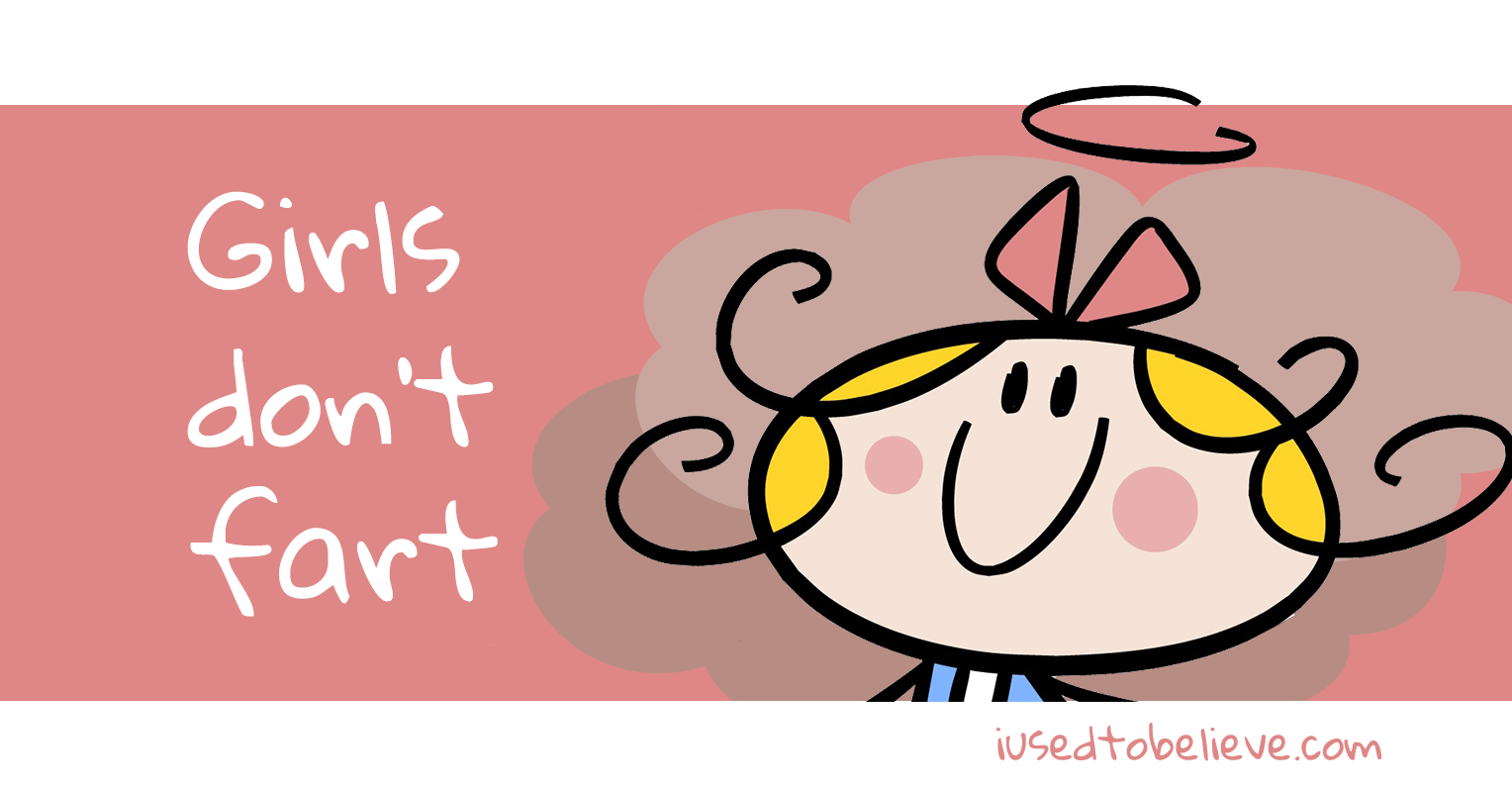 Show most recent or highest rated first or go back to farting.

Girls get over it we all fart. My boyfriend used to believe that girls never farted until he met me. He was very shocked the first time he heard me fart. He said "OH MY HOD HOW TO HELL DID YOU FART ELIZABETH?!" And since then I've always farted for pleasure. Guess what? I'm also A GIRL. Girls fart, no escape now.

I used to believe "flirting" was a girly way of "farting"

I am 47 and i still don't believe women pass gas. i have been married for 18 years and have never heard my wife rip one.

Several years ago, I saw a movie called CARPOOL, in which a girl named Kayla says "Girls don't fart". I went home and asked my mother what it is called when my butt toots, if it's only a fart when boys do it. She told me I was being totally silly and accused me of making up the story, because that couldn't really be in the movie, she insisted. (It really IS in the movie!). Only after finding this neat site and reading postings where both boys and girls talk about farting, did I finally realize that Kayla lied, and it IS a fart, whether a boy or girl does it! So poof on you, Kayla. And shame on my mother for not believing!

As a child, I was at first very puzzled on learning that one's body contains "organs'. Why do we never hear music from those organs, I thought? One day I was playing cards with two girls from the neighborhood I then lived in, Kelly and Olivia. I decided to share with them my perplexment about organs in the body. They laughed and I didn't know what to make of it, whether they understood what I was talking about, and just what they were laughing at. Later, while we were still playing cards, Olivia farted, and Kelly said, "There -- there's some music from one of Olivia's organs!" Then there was more laughter. I didn't know enough at the time to know what level of understanding that meant Kelly had of the question I had posed, or if she know what bodily "organs" actually are. But today I see she must have had at least some understanding of my question. But was the laughter at that point because kids find farts funny, or becauase Kelly (and maybe Olivia too) understood the difference between bodily organs and the musical instrument of the same name, and maybe found it funny that I didn't know the difference? I guess I'll never know for sure, or whether they were lauging "with me" or "at me".

A boy i knew when we were seven, thought that girls do'nt fart. Well, i farted and he believed i was a boy for a looooooooong time, no matter how many times i said i was'nt.

I thought that girls just did not fart. The one day a girl in our gang (SV) leap froged a post box and let rip, the strain being too much. My illusion was gone forever at the age of 12.

When I first met my husband, he thought women didn't fart. He was really surprised after he met me!!!

I used to believe that women didn't fart. Actually, I've still only heard about 2 do it in 33 years, maybe there's something in it?

As a young boy, I used to think that pretty women did not fart. They looked and smelled too good for that. I believed that farting was something only boys did, prefering "burbing" at the rear rather than the mouth. My first girlfriend dispelled that belief when when she farted so loud one night, it woke me from deep sleep. AND ALMOST NOTHING WAKES ME UP FROM DEEP SLEEP!

When I was young, I believed only men farted. I thought women couldn't. Then one time I heard my Mom rip one and I was in total shock!

I told my oldest son that ladies never pass gas, that what he heard and smelled actually came from this stuffed toy he had, called Booderoo. He believed me up until about age 8! I, of course, being a lady, never do that.

Up until I was about 17, I had no idea that women farted. It wasnt untill I lived with my now fiance that I learned that they do it quite well, if not better then guys.

I used to believe that girls never farted. This was destroyed only in grade 7 when a girl called Belinda destroyed that belief forever in English class.

my dad didnt know the women farted becuz he never heard it....then when he got married at age 23 my mom farted and he finally got s clue...

When I was a kid my mom had told me that only boys fart, girls could only "poot". That seemed to convince me that it was a much more delicate experience for the farer sex.

Now I know better. Mom has been the only girl I've ever known who could "poot" like a Howitzer.

Son of a Pooter

I once accused my sister of farting. My mother then proceeded to tell me that girls don't fart until after they have children, to account for her frequent "outbursts" of gas.

My best friend currently dates a guy who is a 22 yr old fireman. He always believed that it is physically impossible for girls to fart, only guys fart. He believes it to this day. One day, my friend's sister and I decided to eat bean chili for lunch after a sleepover, knowing this boyfriend would be over to visit. Everytime we farted that afternoon he turned bright red. We would comment but he would say "No you didn't, girls can't fart." This was a few months ago, I'm 19.