Euthanasia is youth in Asia

This section contains beliefs all on a common theme: Euthanasia is youth in Asia. 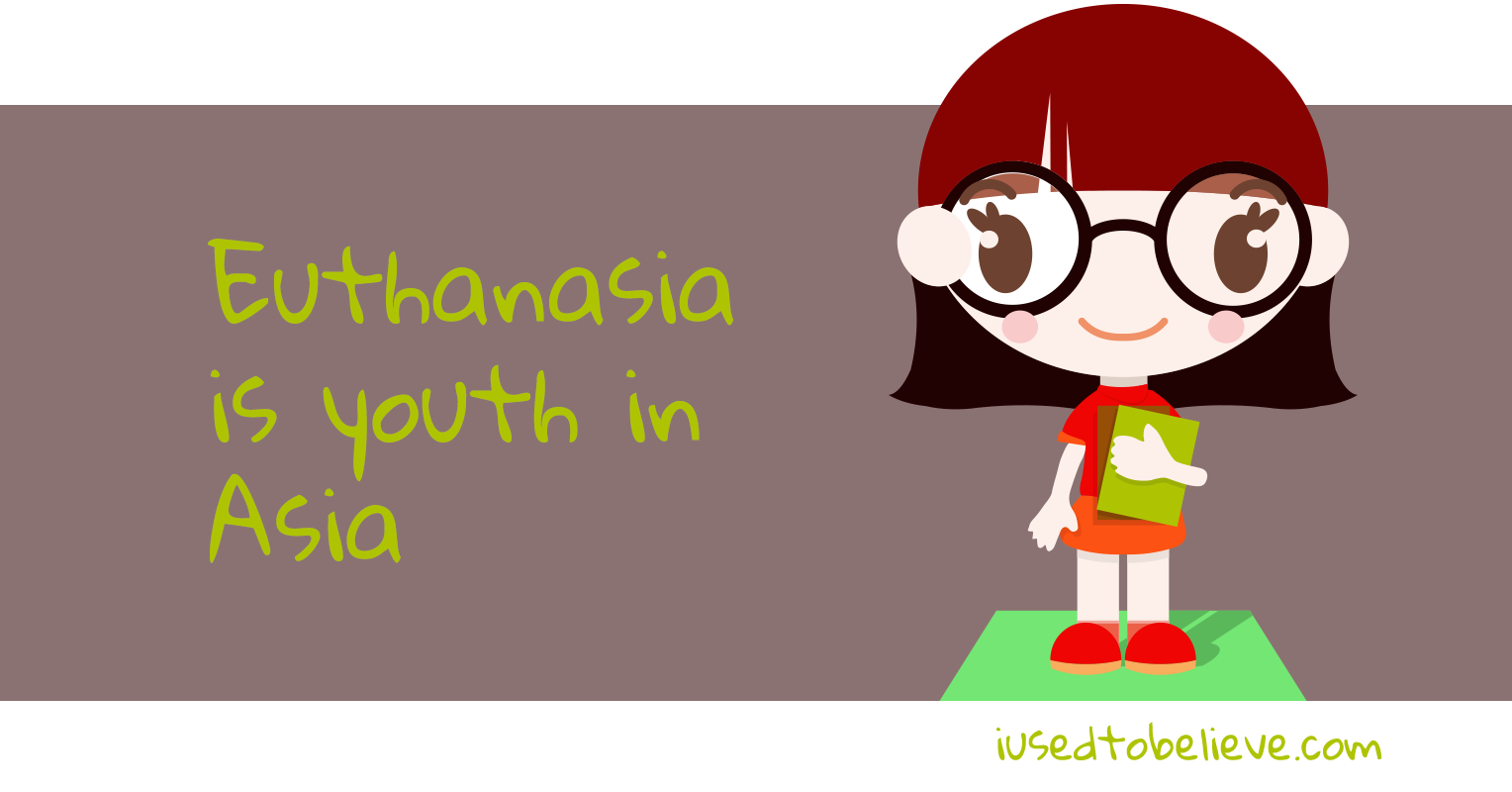 I have thought, until fairly recently, that Euthanasia was 'youth-in-Asia'

I was in Science Class one day and we were talking about death and dying, when one of my friends asked about Euthanasia. When i heard it said i thought it was 'Youth In Asia', but it wasn't. I Didn't know this until i read this website. I couldn't understand what the children in Asia had to do with basiaclly a sudicide act.

when i was young and i heard people talking about dying and 'euthanasia' on the news, i thought that they were saying 'youth in asia' and that the government was making plans to go and kill all of the children in africa!

I used to think Euthanasia was youth in asia and couldn't understand why all those kids were being killed.

Until I was in high school andsaw the word written and learned what it meant, I could not figure out why in the world the youth in asia (euthanasia) would want to kill old people. I was really terrified that one day these youth would off my grandparents.

I used to believe when I heard the word "euthanasia" that they were talking about "youth in Asia..."

When my English class read "Of Mice and Men" a couple years ago, my teacher told us, "It's about euthanasia." Well, I misheard her and I thought she meant, "It's about the youth in Asia." So I read the first chapter and came in to class like, "What the heck? This isn't about Asian kids at all!"

My teacher told me to write a on euthenasia. she only gave me verbal instructions, never writing down the actual term. Being a kid during the Vietnam war, and having never heard that term before, I spent hours at the library trying to research "Youth In Asia" until the libaraian finally set me straight.

I grew up watching the news with my father a lot. I used to think "euthanasia" was "youth in asia" and used to constantly wonder why so many politicians were so opposed to the asian youngsters.

I recently found out that Euthanasia is not Asian youth.

I used to hear my parents talking about euthanasia issues, and I couldn't figure out what the Youth in Asia had to do with people dying, but I figured I should know and was too embarassed to ask.

My sister believed until she was in her late teens that whenever people talked about euthenasia they were actually talking about the "youth in Asia". She didn't understand what all the controvery was about...what was wrong with the youth in Asia? This was around the time of Jack Kevorkian so it was being talked about a lot.

When i was younger, if i ever heard someone talk about euthanasia, i thought they were saying youth in asia. I often wondered what it was that boys were doing in asia that got mentioned on the news a lot!

When watching the news as a kid I thought "euthanasia" was "youth in asia", which was a polite way of referring to child prostitutes in asia.

For many years I didn't understand why everyone was talking about the 'youth in Asia' (euthanasia).

When I was little, I heard the word "euthanasia" as "youth in asia" (presumably due to the war in southeast asia being on TV all the time), and didn't understand what the controversy was over Vietnamese kids.

I used to believe that Euthanasia were children living in China. ("Youth In Asia")

For the longest time I couldn't figure out why everyone, was so concerned with the 'youth in asia'. Through inference I realized that the 'youth in asia' had something to do with killing people. I immediately adopted a position of anti-youth in asia. Until one day when my mother heard this statement and through her tears of laughter explain that 'youth in asia' was euthanasia.