People killed in films or on TV die in real life.

This section contains beliefs all on a common theme: People killed in films or on TV die in real life.. 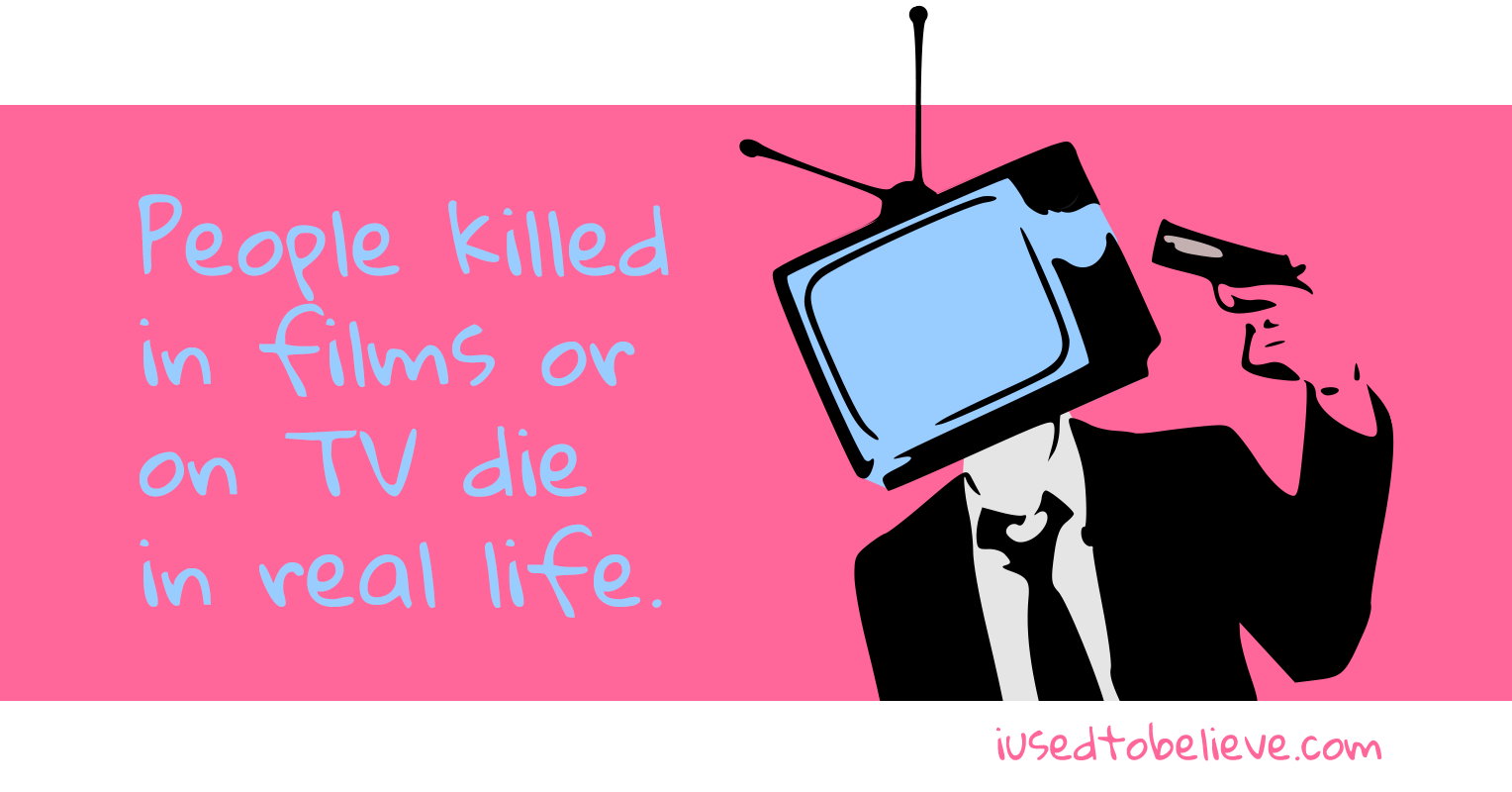 I used to believe that when someone died in a movie they really died. So after I saw Titanic I was completely dumbfounded when I saw Leonardo on tv again!

When I was 6, I used to believe that each time we saw a character dying in a movie, the actor representing him was proudly giving his real life for the sake of the movie.

That when someone died in a movie they died for real.
Also when it showed the persons life in stages that they used the same person through out the whole film. Like when there and then they had to wait till they grew up to do the scenes for when there older.

When I was alot younger than now and went to the Saturday morning cinema, I thought that all the cowboys and indians who were shot in the films were prisoners who were sentenced to death. No one had explained about stuntmen and blank bullets!

I was in a timezone waiting to play a 'laser skirmish' game with my little sister. When she had the gun in her hand, she started crying and so she stayed outside with my dad. After about fifteen minutes the game finished and I came out and it showed the scores on a little TV screen. When she realised I had won, my little sister was overjoyed. I later found out that she thought the guns were real and you would die if you were shot.

I believed that when somebody is being killed in a movie, the director would find a man/woman who wants to die, pay their family some money and dress him/her as the person and kill them when they film.

When I was a boy I used to believe that actors who die in the movie were really dead but one time I watched another movie, and I saw him again and he played different story.

I used to believe that the extras that got shot in films were prisoners whose punishment was to be put to death by the actors.

People dying in movies? Well they must be really in love with making films to actually allow themselves to be killed during a film.

i used to think that when someone died or got hurt on tv shows or movies, they really died. i thought that stunt doubles were the ones who sacrificed their lives for really good actors.

I used to believe that when people died in movies and on tv they actually died in real life...that's why I was so sad at the end of titanic...

When my sister was little she loved the movie Poltergiest. then one day my mom heard that the girl died and told my sister. and then she said "will she still be in my movie?"

When I was young, I used to watch a lot of action movies. I loved them but the thing was, I didn't know they were acting! Everytime someone would be shot, stabbed, or killed, I would feel sorry and it would be really sad. Obviously I thought I was perfectly right so I never brought it up. Until one day I saw a movie that had the same person die as the movie i had seen 2 weeks before. Finally, I asked my parents and they were so shocked because I've been watching all those movies and always thought they were real. The embarassment was so bad but it's still better than finding out the truth today, when I'm 22.

jason wong from the t dot

I used ot think that people who died in movies or on tv really died. To justify this, they MUST have used criminals from death row.

I did not know for many years that the Wizard of Oz started in black and white, went to color, then back to black and white. When we first got our color TV it was one of the first movies we rented- I was SO bummed when it started!

When I was about 8 I was very distressed when I watched Westerns because I believed that real guns were used and that people actually died. My parents reassured me that the guns only fired 'blanks'. However the only 'blanks' I knew were the 'double blanks' used in the game of Dominos. So I was partly reassured but still puzzled because a)I could not work out how they put the Dominos in the guns and b)I thought being hit by a Domino fired from a gun would be pretty painful. It was several years before told my elder brother this and he thought I was really stupid.

I used to think when people got shot in movies that it was real. My parents told me that how would actors agree to die just for a movie... but I thought they were lying to me so I wouldn't freak out. Then they just told me that it wasn't blood, that it was just ketchup. So that Christmas I asked for a gun that shot ketchup like the ones used in movies hahaha.

I used to believe that when a character dies in a movie that the actor who plays him really died to make the movie, and therefore I would often cry when characters died.

When I was young I saw a movie where a car went over a cliff. I remember thinking that the driver's family must have got a lot of money to let that guy drive off a cliff and die just to make a movie.

As a child I believed that if a character died in a film so did the actor playing them, though I knew that they were only actors. I asked my dad why film makers didn't just use criminals to play baddies as it wouldn't matter so much when they died. He was totally bemused. I just though it was part of the job if you were unlucky enough to get the role of a baddy.

when i was 12 i was in love with Elvis. i saw a movie where he dies. I cried for hours, cause i thought he was really dead. i would not belive my mom when she said it was just a movie and he was alive