If you don't hold your breath as you pass a cemetery you will die or become possessed.

This section contains beliefs all on a common theme: If you don't hold your breath as you pass a cemetery you will die or become possessed.. 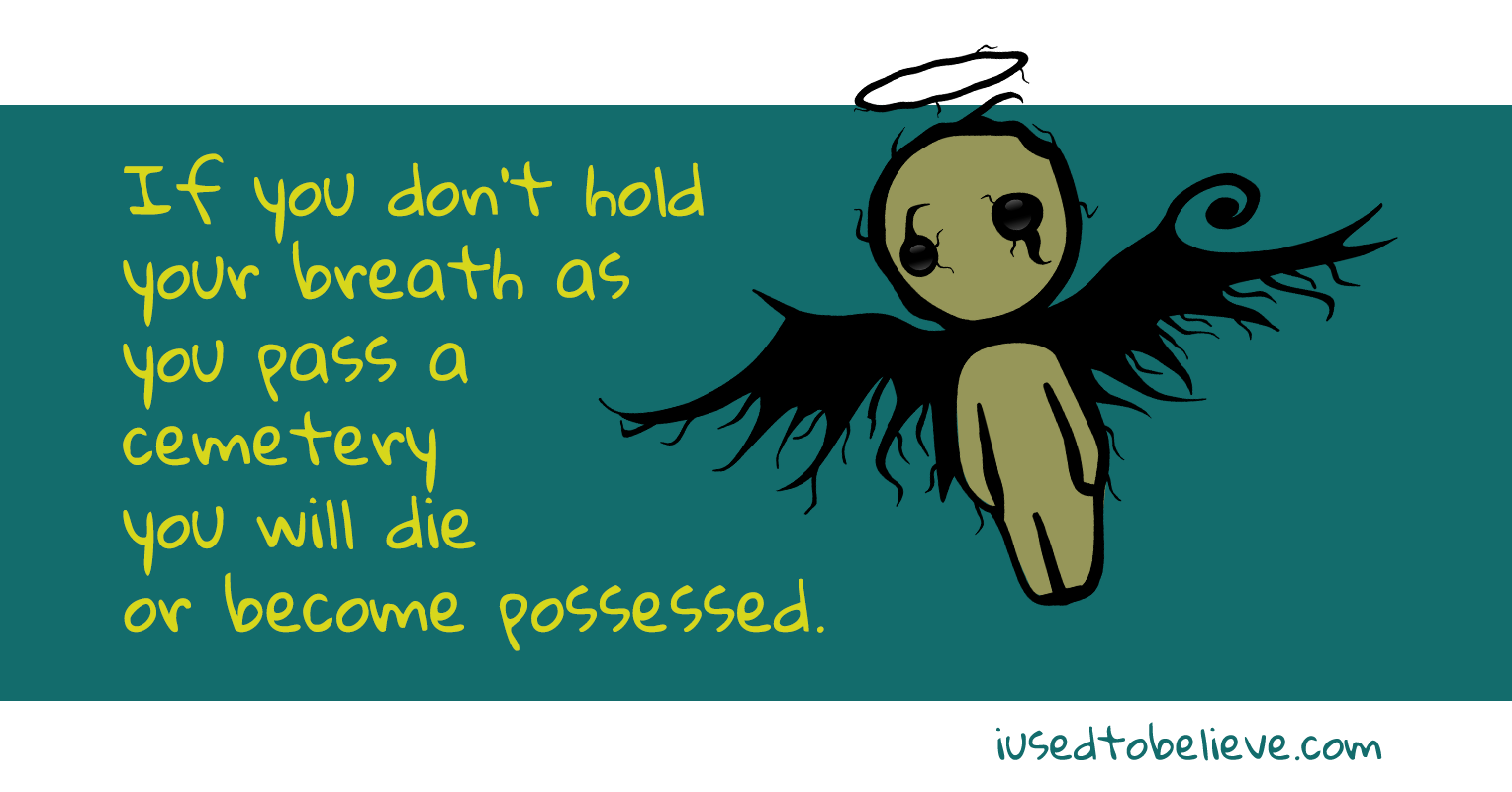 I used to belive that ghosts could steal your breath, or lifeforce and so whenever i was going passed a cemetary i used to hold my breath so they couldn't get in. I once almost passed out doing it

I was told by a friend in elementary school that you had to hold your breath while passing by a cemetary. If you didn't, you would get "Cemetary Breath" and die within a few days. There was a huge cemetary near my house that my family would regularly drive past, but they never noticed me turning blue each time we drove past it.

This was actually a very common belief at my school-we thought that if you were passing a cemetary you had to hold your breath, otherwise an evil spirit would invade your body and you would die. You didn't have to hold your breath if you were touching metal, this was obviously because doing this gave the ghosts good luck, and they'd leave you alone. I strongly believed this, and so did all my friends. There was one cemetary that was very large, and there was a stop sign on the road going past it. I cannot say how many kids turned blue passing this cemetary.

some stupid kids from toronto

I used to believe that if you breathed while passing a cemetary then you would be burried there, so I would always hold my breath. This was very difficult if there was a traffic light involved. I can remember many times not being unable to do it and then I would be depressed b/c i was to be burried so far from home.

I was told that whenever you go past a cemetry you have to hold your breath otherwise you'll breathe in the spirit of a dead person and you'll die.
To this day i still unconciously hold my breath!

I used to believe that if I didn't hold my breath when we went past a cemetary, the souls of all the dead people would all try to get inside of me and kick my soul out.

I used to believe that you had to hold your breath while going past a cemetary because breathing is disrespectful to the dead.
I'm not sure what I thought would happen if I DID breathe... they'd probably come out & hunt me down or something

I think it was my neighbor who told me that you had to hold your breath when passing a cemetary or something bad would happen (die, bad luck, possessed, etc). The bad part was that there was a small graveyard between my house & my bus stop that I had to pass every day, twice a day. I faithfully held my breath every time. Until we went to visit one of my mom's friends...who lived across from a very large graveyard. Obviously I had to breathe; and nothing bad happened. So I decided not to believe it anymore.

I used to believe that, if you inhaled at all while going by a cemetary, you would inhale the souls of the dead and they would take over your body.

I used to hold my breathe whenever I passed a graveyard because I thought if I didn't the evil spirits would come in my body while i inhaled and steal my soul, killing me,. I did this until the age of 12 when a friend asked why.

When I was a kid, my mother told me to hold my breath whenever we passed a graveyard. This was every day as there was a graveyard between home and school. The reasoning I was told at the time was that if you held your breath the whole time as you passed, you could make a wish and the dead would grant it. Later, I'd asked her about it (realizing after all that time that it was kind of weird) and she said it was so the dead wouldn't like... get you, or something.

I used to believe that when you drove by a grave yard you had to hold your breath, cross your fingers, and close your eyes so the dead people couldn't take you with them. This was a constant ritual between my best friend and I.

When I was younger my brother convinced me that if I didn't hold my breath when we drove past a cemetery then I would breathe in the spirits from the cemetery and they would kill me. And it scared me to death when I couldn't hold my breath all the way. I thought I was going to die.

ever since i was 6, i used to hold my breathe over a graveyard because they couldn't breathe so i had to breathe FOR them. i'm 14 and i still do it=D

Wen i was younger i was told that if you held your breath when driving past a cemetery, you would live a day longer. If you breathed in u would suck in dead spirits and loose a day off your life span!

When I was young my friend's older sister told me that if you didn't hold your breath while passing a graveyard, spirits could go up your nose. My aunt also said that if you show your teeth while passing one, someone iny our family would die. Nice huh

When we were little, my cousin and I used to hold our breath when we rode by a cemetary. It was rough if the traffic was slow.

when i was young i used to believe that if you went by a graveyard and read a tombstone, then that person would haunt you, unless you held your breath

I was always told that you had to hold your breathe while passing a graveyard or you would be the next to be put there.

I used to believe that if we drove past a funeral home or cemetery, and I breathed while we were driving past it, I would die right away.

I'd hold my breath every time, which really sucked at a red light or if it was a big cemetery. I remember my mom telling me to stop holding my breath.

Once in a while I catch myself doing this now! Only when I am in the back seat of a car, though.