If you swallow chewing gum you will die

This section contains beliefs all on a common theme: If you swallow chewing gum you will die. 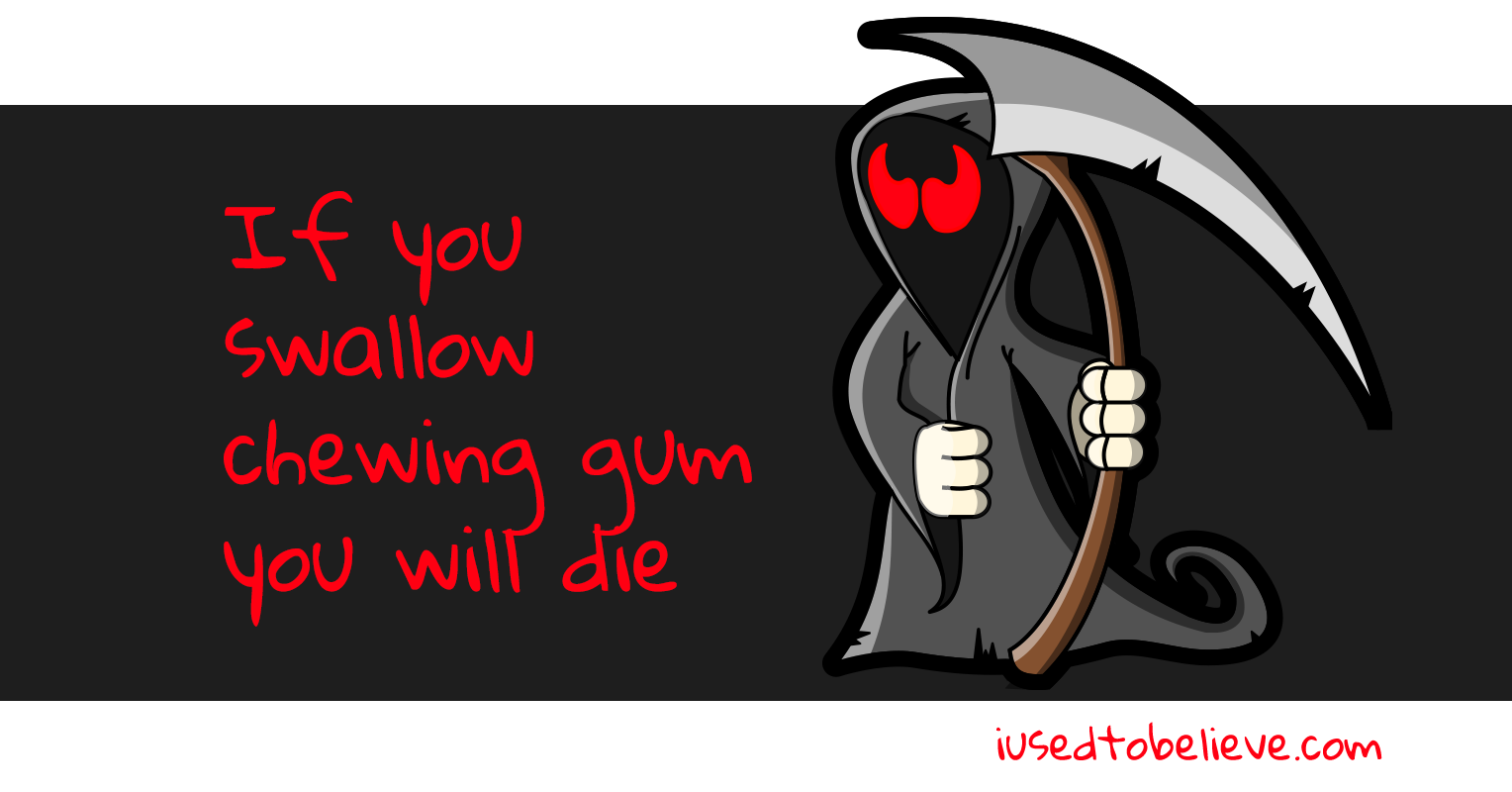 Show most recent or highest rated first or go back to chewing gum.

When I was a child I liked chewing gun but I started to believe that: If I smallow the chewing gun it would stick in my intestine and I would die.

I used to believe that if you swallowed your gum, you would go to hell. I rarely chewed gum until about the 7th grade.

when i was young my neighbors informed me if you swallowed gum, it was stuck in your *lungs* for the rest of your life, which i believed for some time

When I was small, I thought if you swallowed gum it just fell down and stuck to one of your lungs. I was not the brightest when it came to the inside of humans' bodies.

I grew out of this belief at age 8.

My mum explained to me that it wasn't healthy to swallow chewing gum.When I understood that I should never swallow it,ever,I became terrified that it would turn into a gum monster in my tummy.
Hehe,I don't swallow it now...

When i was younger I was told that if you swallowed chewing gum that it would wrap aroung your wind pipe and choke you. I know its not true but even now at 31 im actually chewing gum as i write this article, i cant swallow the gum.

I was told that if I keep swallowing my gum the gum will wrap around my belly button and I will die. So far as an adult I have not swallowed any gum and I am still living. Maybe I will try that on my son.

When I was younger I would always chew my gum and swallow it. My aunt told me that there was this thing in my throat and when I swallowed my gum it would get stuck there. She also sayed that it stayed there for 7 years. I really thought that every time i swallowed gum it was there for 7 years and it just kept building up and i would die cause all my food would not go down my throat.

When I was younger I had a terrible habit of swallowing my gum. one day my mom said that when you swallow gum it just stays in your stomach and that eventually you'd get very sick and couldn't poop anymore. to this day I never swallow my gum!

One day, I was chewing gum, (I love to do that, especially mint-flavored) and I swallowed it. I went to my Mom and told her that. She said that I shouldn't do that, so I started to believe when I was little that if you chewed gum and swallowed, it would clog up and stop you from breathing. I only stopped this belief lately, when I took my 5th grade SAT and swallowed gum all through the week.

when i was a child, i used to believe that if i swallowed a chewing gum it will make my internal organs stick together...and if i didn't eat 2 eggs it will affect the sight in my eyes as one egg for each eye... i also used to believe that the chocolate i found on x-mas tree was put by santa clause at night...i believed if i bent down from balcony, the earth will send a big rope up and pull me down to z ground....and i thought dad was 100 years old and that there's nothing he doesn't know :)

that if you swallowed gum id would get stuck in your stomach and more food would pile up and then youd die!!!
then i learned how to use a computer and things changed...

i beleived that if you swallowed too much gum, it would clog up your stomach and you would starve

I used to belief that if you swolled 1 little piece of gum it would kill you.

I believed that swallowing chewing gum could kill you, because it could stick to the sides of your windpipe and form an airtight layer in your throat and choke you. It never occured to me that it actually went down the other pipe. I used to wonder why everyone in high school swallowed it and NO ONE DIED. I couldn't believe that they would take such a big risk as to not get caught chewing. I believed this for my entire life, until five minutes ago when this website proved me wrong. I am fifteen.

I WAS TOLD THAT OF YOU SWALLOWED GUM, IT WOULD WRAP AROUND YOUR HEART AND KILL YOU

My parents told me that if I swallowed chewing gum it would wrap around my heart and windpipe and choke me :-(

When i was little i used to think if you swallowed your gum it would swell up in your throat you would choke and die now i still have a tough time swallowing my gum in class so i wont get caught.