This section contains beliefs all on a common theme: Eating crusts makes your hair curly. 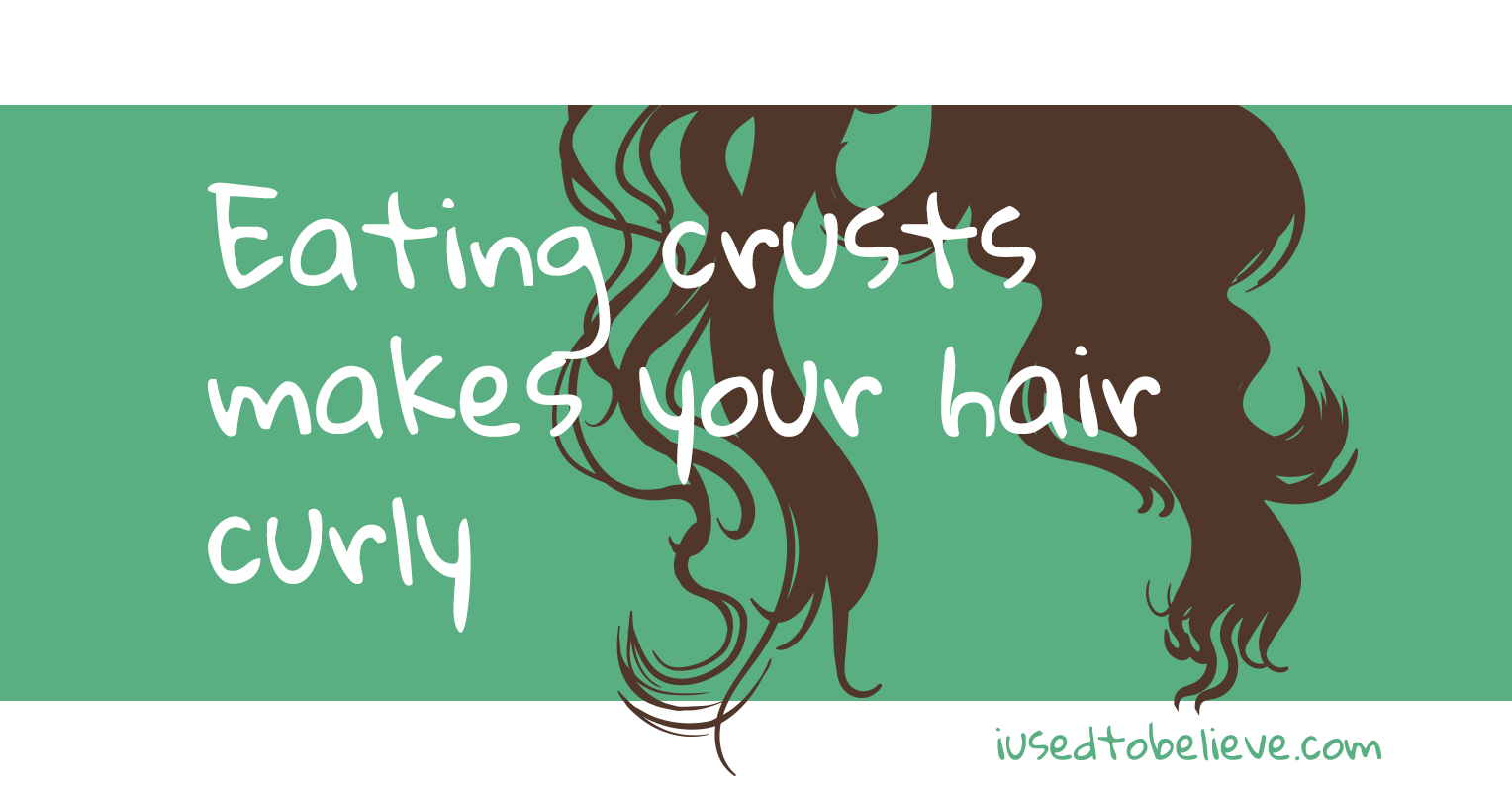 Show most recent or highest rated first or go back to crusts.

When I was 7 years old, I always ate my crust without any fuss. It was just more bread in my mind. However, my principal, who had long beautiful locks of red hair, said to a friend of mine that her hair was curly because she had always eaten her crusts as a child. This did not win over my friend, but it won me over since I've always had straight, flat hair. Soon I was on a mission to get that curly hair! If a friend didn't eat their crust, I always ate it for them. I also took a liking to the heels of loaves, because, logically, they were all crust. I worked so hard, but to no avail. I still have straight hair, and a taste for the heels.

My Grandpa told me when I was 6 years old if I drank coffee the bottoms of my feet would turn black. He also told me that if I ate the crusts on bread I would get curly hair. Even though I now know it's not true-I don't do either and I'm 40!!

My Gran used to try to convince me that my hair would go curly if i ate the crusts on my sandwiches...i believed this for a while, but then i realised that birds ate crusts and they didnt get curley feathers! I never really wanted curley hair anyway!

My grandfather told me that eating baked beans gave you curly hair. He also told me that if you don't eat the crusts on your bread, that your teeth will fall out.
Nice guy, huh?

My Mom told me that if I ate the crust of the bread from my lunch sandwich I would get curly hair. My brother had horrendously curly hair and looked like an idiot; therefore to this day I do not eat the crust on the bread.
By the way....I'm bald.....go figure

As a child, I had naturally wavy hair, and my sisters hair was stick straight. My mom used to tell her, "If you eat your crusts, it'll make your hair curly." But she was no fool. She ate and ate them until she finally picked up on the fact that I was throwing my crusts to our dog, and yet my hair was curly. She was pretty mad. She still brings it up even to this day.

I used to believe that crusts of bread made you hair curly. Broccoli made it straight and i would be able to see in the dark if i ate carrots. I also beleived if i swallowed gum it would make my insides stick together

When i was about 4 my mum and aunts told me that if i ate my crusts, my hair would grow curly. i ate them and only when i was about 8 or 9 did i actually realise that it wasnt making the slightest bit of difference because my hair was curly to begin with! i even told my friends to eat it! i was so annoyed when i finally found out...

I used to believe that if i ate the crust of the bread i'd get curly hair....funny thing is i do have curly hair

When I was five, a neighbor girl told me that if I ate the crust of bread, then my hair would get curly. So, I ate all the crusts, because I wanted to have curly hair!

My friend Chris told me that because I ate the crust on my PB&J sandwiches - my hair is curly. This has to be myth... I looked it up and there have been studies that deny this belief. But I am skeptical.

When I was little my parents told me to eat my crust because then my hair would turn curly. I didn't want curly hair. And after I realized my brother and dad both ate their crusts and had curly hair I believed them and stop eating crust. Now I'm 20 and am just starting to eat the crust, trying to break the habit.

i used to believe that if u eat the crust on bread that ur hair would become curly...wow i was stupid :)

when i was little i never ever liked or ate bread crusts. my grandmother, in the hopes of getting me to eat it, told me it would make your hair curly. after that i never went near bread crusts for a while. now i eat them, and my hair is just fine

My mother told me that if I ate the crusts on both ends of a loaf of bread my hair would go curly!
It was when I found out about Father Christmas I began to doubt the truth of the crusts story.....

my friend thought that if he ate the crust on bread, his hair would be curly.

I used to believe that if you ate the crusts off bread, your hair would get curly, since that's what my mum said. I would meticulously peel the crusts off when she wasn't looking because I wanted my hair to stay straight, but obviously it didn't work as my hair is now curly.