If you swallow a seed a plant will grow inside you.

This section contains beliefs all on a common theme: If you swallow a seed a plant will grow inside you.. 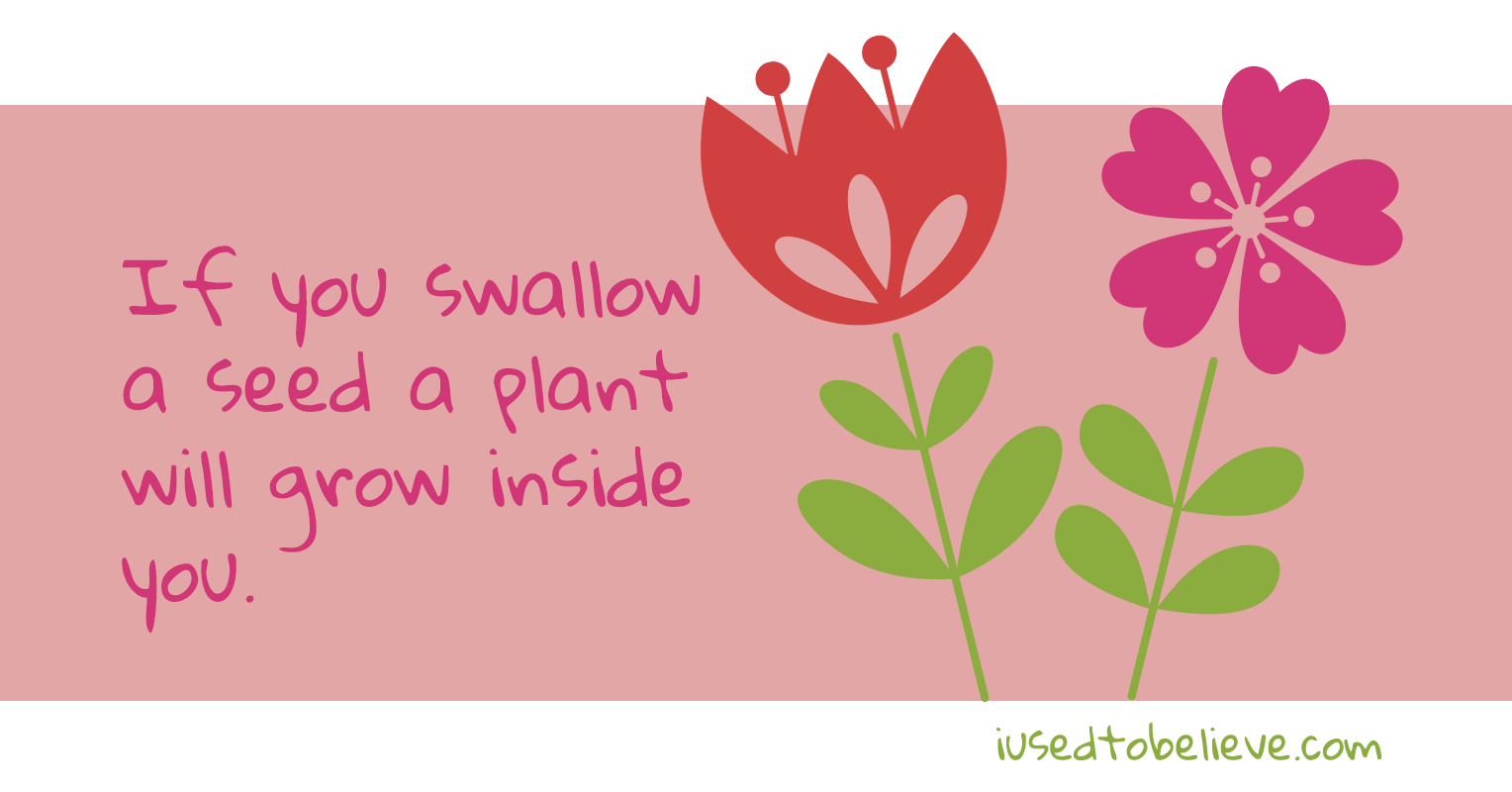 Show most recent or highest rated first or go back to seeds.

i used to believe that if you swallowed the seeds from apples, trees would grow out of your ears!

when i was little, my mom told me not to eat apple seed because they would grow into a tree. I thought it would come out of your ears! One day on the bus one of my friends eat a whole apple. All of it. When I got to school, I told the teacher so she could get it out of him.

My kindergarten teacher once told me that if I were to eat grapes with seeds, grapevines would grow out of my ears. Since I loved grapes I ate all of my friends grapeseeds too. Wouldn't it be neat to be able to pick grapes from your ears?

One christmas me and my cousin sat at the dinner table and ate an entire bowl full of cherry tomatoes. My father promptly asked us, "did you eat the seeds?" to which we replied, "yes, all of them", "oh no" he said, "you'll get tomato plants growing inside you" i wasnt too sure at the time but then my cousin had a strange growth on her foot and we were adamant that she was infact growing a tomato plant from her foot!!! to this day i still cannot eat tomatoes!

When I was about 6 we'd just been taught how a tree grows. So when we were at dinner one day i watched dad eat a whole tomato-including the seeds. Then he downed it with a full glass of water. I ran screaming from the room-convinvced a tomato tree was about to grow inside him!

When I was little my Dad convinced me that if I swallowed a cherry seed, a tree would grow out of my ass. I remember always being extremely careful...but accidentally swallowing one one time. I ran to the basement and started crying and when my Mom followed me and asked what was wrong, I told her I didn't want to have a tree grow out of my bum and that I accidentally swallowed a pit and that I needed surgery because I didn't want to look stupid. I was like...5.

My Nana told me not to eat orange and apple seeds because they would grow in my belly. I spent a little while eating dirt and seeds in an effort to grow a tree.

My neighbor died of stomach cancer, but it was described to me at the age of 5 or 6 as "something growing inside of her." Thus, I envisioned cancer as a plant that kept growing inside of you until it killed you.

From then on, I was very careful about eating watermellon, apples, or anything else that might put a seed into my stomach and cause a plant to grow!

When I was little, my mom said that since I swallowed a seed out of an orange, I would grow orange seeds out of my nose!So every morning I would check and then I kept on thinking that boogers were orange seeds!SoIwould plant them(the boogers),but I would get mad because there wasn't a tree growing outside.

When I was little, I used to believe that if I eat grapes with seeds, a grape vine will be grown from my throat. So if I accidentally swallow a grape seed, I won't drink water that day so that the seed can't grow.

My sister tood me that if I ate sunflower seeds they would grow inside me. I used to have night terrors about giant flowers growing out of my eyes and mouth. Suprisingly I get on well with my sister despite her mental torture.

I used to believe that if I planted and orange or a banana or any kind of food with seeds in the dirt in my lawn a couple inches down and watered it, that I could grow an orange tree or a banana tree or what-have-you right there in suburban New Hampshire.

My dad once ate a pumpkin seed and his older brother told him that it would grow inside his stomach until it got so big he would explode. He sat on top of the fridge crying until his mom came home and calmed him down.

My parents always told me that if I swallowed an apple pip, an apple tree would then grow in my belly and consequently grow out my mouth. This of course applied to any fruit. Imagine my panic when I did accidentally swallow a pip.

I was told as a child if you swallowed any pips, no matter if it was on purpose or by accident, the pip will grow in your stomach and a tree of that particular fruit pop through the top of your head...scared me for years! Never thought to ask how..!?

When I was younger, I always believed that if you swallowed a seed, a tree would grow in your stomach. It was often very hard eating Watermelons and Mandarins.

I used to believe that when you swallow seeds (i.e. watermelon, apple, orange, etc.), the seeds would grow into a tree and you would die.

My nan used to tell me that if you swallow seeds, they will grow inside you. I remember once swallowing an apple seed and freaking out because I was convinced I would have a tree growing out of my mouth in the morning.

She used to also tell me that is I wore my socks in bed, I would get warts all over my feet.

When I was 5 my mum told me that if you swallowed an Apple or Orange seed a tree would grow in your tummy. I spent a whole five years convinced I would start sprouting leaves out of my mouth and ears.