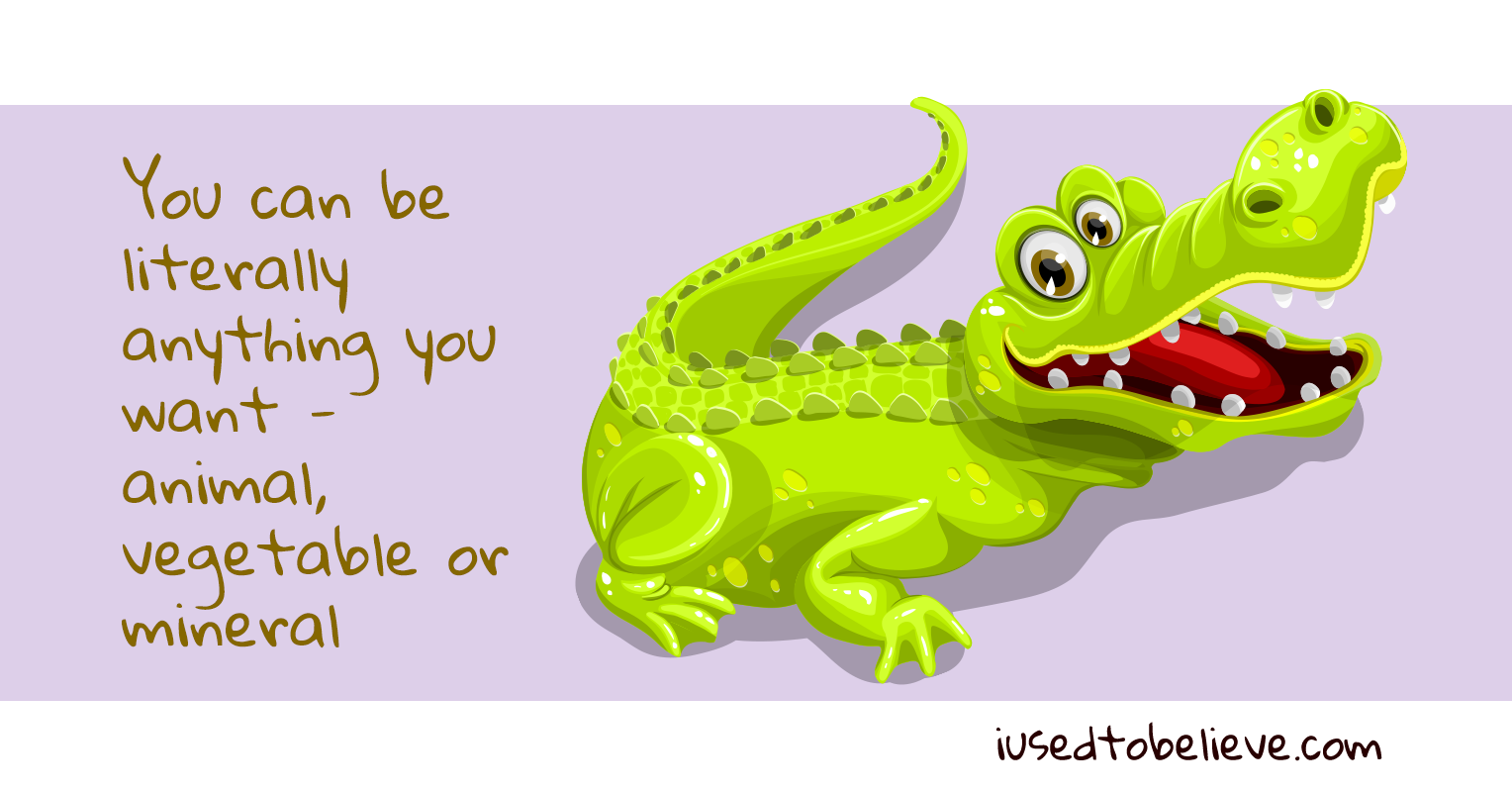 Ok... You know when grown ups say: "You can be anything you want when you grow up" that it only means like a job? Well, my brother took it way too literally. My mom asked my 5 year old brother what he wanted to be, and he said, get this, a "Zoura" from Pokemon. She then looked at me, I was 13 at the time, and she asked what that was. I then spent an hour explaining Pokemon to my parents. And now Pokemon go is out? Oh my...

That guy with a brother that wants to be a zoura.

I actually thought that when I grew up I could be a Genie.

When I was in Kindergarten I used to believe that when I grew up i could be a butterfly.

when i was younger i believed in mermaids, so every night i would look up at my wishing star and say "star light star bright first star i see tonight, i wish i may i wish i might have this wish i wish tonight." then i would wish to be a mermaid. after I noticed it had not worked after a while i would cry while wishing. haha.

i used to believe that i could one day become i spider. this is totally true, when i was three i would always say that i wanted to be a spider when i grew up.

I wanted to be an elephant when I grew up.

My little brother took the 'you can be anything you want to be when you grow up' too seriously. He believed he could just choose to be a prince. That way everyone would have to do as he said, he'd have lots of money and could do whatever he wanted. He'd decided he was going to build his castle in the backyard though, so he could still sleep in Mum's bed at night.

I used to want to become a Power Ranger. No lie.

When I was little (around 5 or 6), I went to the circus with my family. I have a little sister, around 4 at the time, who became entranced with the elephant portion of the circus. The next day at her school, the teacher asked everybody what they wanted to be when they grew up, and naturally, my sister said she wanted to be an elephant when she grew up. Right now, she thinks she knows everything because she gets straight A's in school, but it is always a good laugh when you tell her "Yeah, and this is coming from the girl who wants to be an elephant when she grows up."
Sometimes, I think she still wants to be one, and will stop at nothing to make her dream come true.

My sister is an Elephant

My second name is doyle,
so when i was younger i wanted to be a bus.
i used to call myself 'Bus Doyle' for about 4 years
thanks

I used to believe I could grow up to be a snowman.

When I was rather young, adults would occasionally ask me what I wanted to be when I grew up. I'd hear kids say something rather boring. I wanted to be a male African Lion. I'd say lion and they'd smile like I'd never learn how.

When I was young and someone asked me what I wanted to be once I grew up, I'd say "A DOG!"

When I was little all I wanted to do was grow up already. Not so I could be older or get more privileges but so I could be a fire engine. No, not a fire fighter, a fire engine: Red, shiny, with a ladder, and most importantly a really loud siren. I guess no one told me I couldn't transform...

I used to believe that when I was older, What I wanted to be was a big sister. Seeing as my mum has had an operation to prevent that, my dream was shattered. lol. It was a huge shock to find out you cant grow up to BE a sister.

This is not my belief, but when my sister was little, she used to believe that she could be anything she wanted to be. It frustrated her teachers to no end when it changed everyday.
"Grace, what do you want to be when you grow up?"
"A fairy"
Next day,"A kitten"
After that, "A goat"