Getting fired means being set on fire.

This section contains beliefs all on a common theme: Getting fired means being set on fire.. 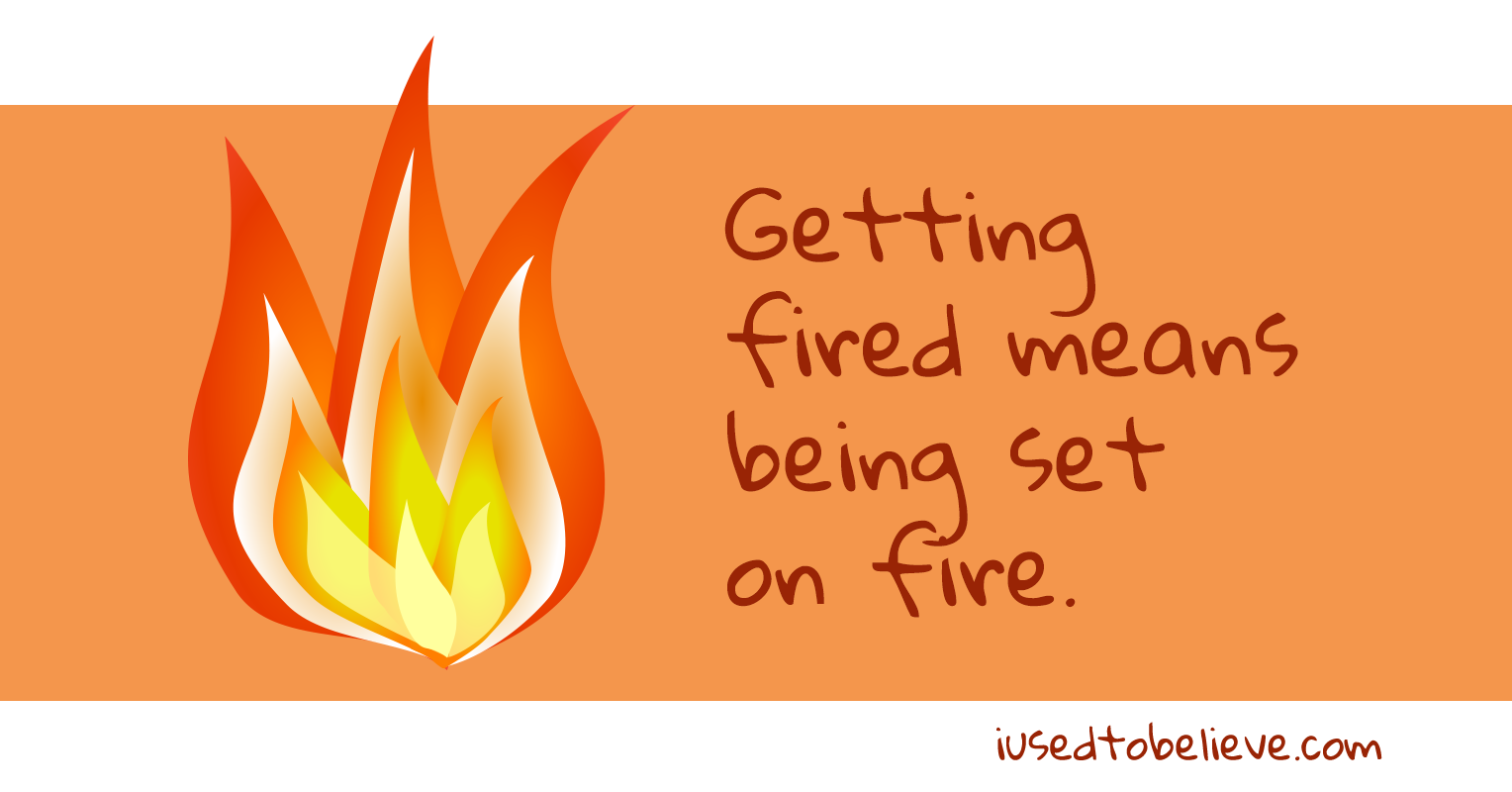 When I was little my dad came home from work in a bad mood. He told my mom he was upset because he had to fire someone that day. I remember crying that night because I was so upset my dad was so cruel that he would set one of his employees on fire.

when I was a young kid I overheard my sister telling my Dad that she was fired. FIRED?!! Yikes! I envisioned her being tied to a stake and surrounded by fire while all her coworkers looked on. I was amazed that she didn't look all burned and thought she must have gotten the ropes off and ran really fast out of there.

When I was young, I used to believe that "getting fired" meant that a person would go to the boss's office and the boss would pour a ring of gasoline around the employee and then set it on fire and make them sit in the ring as they got yelled at.

I used to think that getting fired from your job really meant that you would be set on fire. I learned that my mom lost her job when I was about 7 and I was scared for a while that she was going to be burned up. When it didn't happen, I figured it out.

When I was like 6 my dad was gonna get fired from his job. When I found out I started to cry b/c I thought that they were going to throw him in the fireplace.

When I was little I thought my dad was the devil because when we would all eat dinner after he came home from work, he would say "I fired so and so today ha ha ha!" I thought he worked in hell and was throwing people in fire pits!

when i was 6 my grandpa got fired from his job and i cried hardcore because i thought that when people got "fired" it meant they got thrown into a big pit of fire.

When I was watching the TV show "SpongeBob Squarepants" Spongebob got fired from his job. His face swirled up and the then he had some sort of tempor tamtrum. So I thought that being "fired" meant that your face will swirl up, and you'll have a sort of seizure. I soon relized what getting "fired" meant.

i had never heard the phrase "fired" before. the first time i saw "cat in the hat" and the fish said sally and conrad's mom would get fired, i thought "why would they kill her because her place was messy? thats cruel!" and asked my mom why she would get fired.

Not me, but my DAD once heard his father mention people getting fired at work, and he thought they were engulfed in flames.

I cant believe i believed this...i thought that getting fired meant that you did something wrong in work so they gave you a burn or a cut. It was all my dads fault. He was a carpenter so often he would get cuts. He would tell my mom that he did something wrong like doing this to fast and he would get cut. I also heard him say once that Ralph, a man who worked for him, got hurt because he was doing things half fast so he had to fire him.

Back in the days before kindergarten, my mom and I would watch a lot of craft shows in the daytime while my dad was at work. I remember watching one particular show about making clay pots, and how they go into a kiln to get "fired". My dad came home a little later that day and I overheard him talking to my mom about how he'd messed up some cabinets (he was a cabinet maker) and how he was afraid his boss would fire him. I ran over to him and started crying, thinking my dad was going to get glazed and tossed into a kiln for messing up the cabinets!

when i heard of people getting fired at work i used to think, they got set on fire. I was horrified of growing up and doing a bad job at work, lol.

When I was little, I took language very literally. When I would hear about someone being "fired", I thought that meant their boss came out with a flamethrower and set them on fire.

When I was little I thought that getting fired actually meant that your boss would tie you to a stake and set you on fire. When my mom told me her friend had just gotten fired, I was horrified and started crying. It took an explanation and an hour of reasurrance for me to believe they had not set her on fire and that she was still alive. I was about 6 years old.

When I was little, I overheard my dad tell my mom about a co-worker who had been fired. I thought they had poured gasoline over him and struck a match.

When I was quite young, Dad would sometimes bring me with him to the office on Saturdays, when he was catching up on work. He told me not to break anything, or he would be fired. Of course, I believed that meant they'd set fire to him . . .

When I was 5 or 6 I thought getting fired was a HORRIBLE thing; being lit on fire due to your job! I was so worried my dad would get fired.

When I was about 5, my best friend told me that she heard her father was "fired" from work. We discussed this to figure out what it meant. We finally decided it meant that his boss put him in the center of a circle and built a ring of fire around him!