This section contains beliefs all on a common theme: Your life is like the Truman Show. 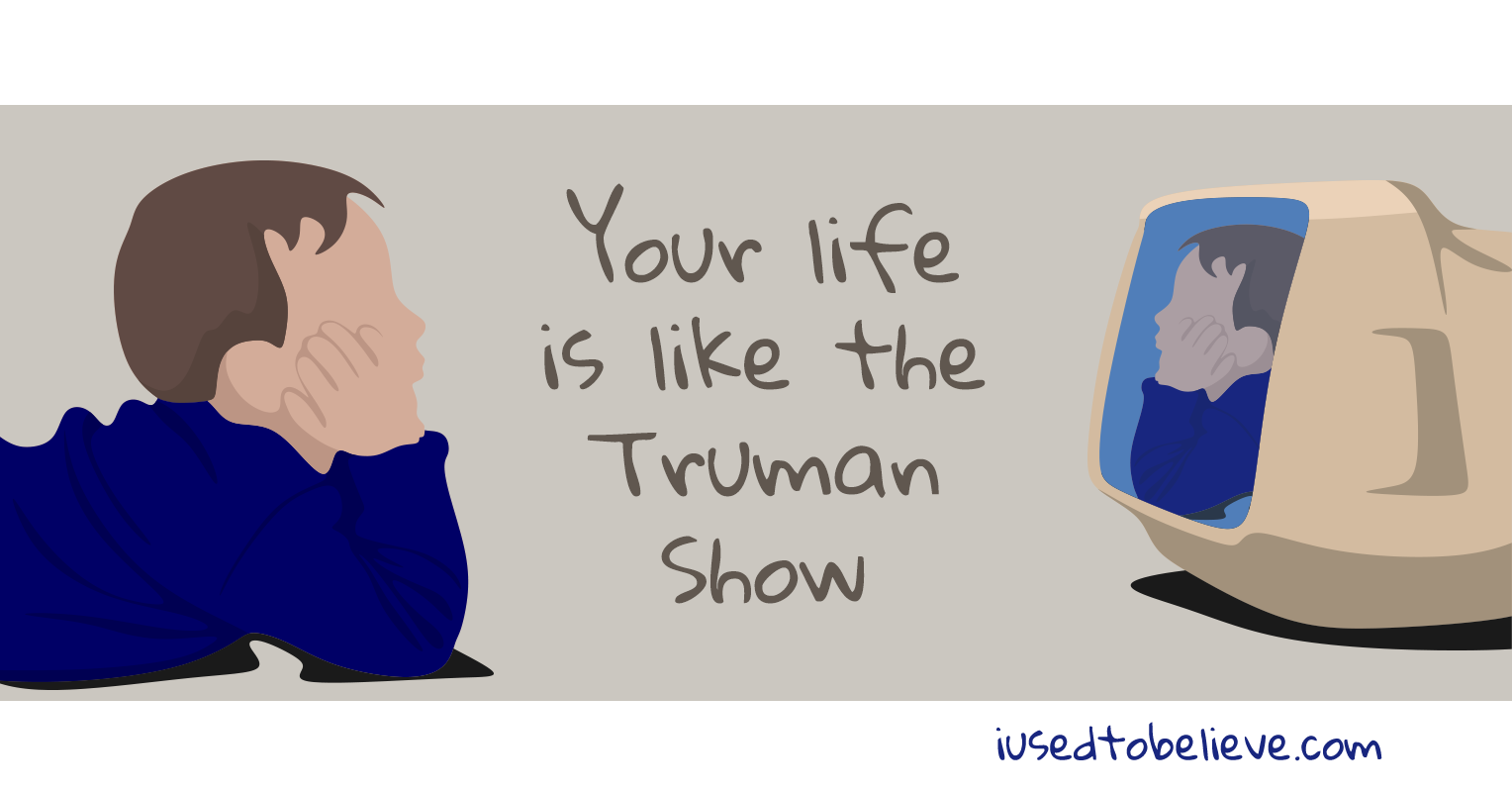 When I was a child, I used to believe that I was inside of a TV show, just like in the movie Truman Show. I used to think that people were robots programmed to be my friends or my enemies, to help me or to let me down, that they didn't have real feelings and that they just pretended to feel emotions and think.

I sort of lost touch with reality when I was about 6 years old, and I'm still not sure what caused it. I was convinced for about a year that I was in a TV show, kind of like the truman show, so I would do random quirky things for the audience, like 4th wall breaking. I also got stressed when I was seperated from my parents because I thought they were being replaced by imposters. This happened when I would lose then and they would turn up at a different place than where I thought they had gone, so I thought the originals had been kidnapped.

I used to believe that the world was made for me and that my parents and everyone else around me were acting from a script. So i would try and do spontainious things to try and muck up their performence like ask them where i was born and what i had for breakfast. Funny enough it just made people annoyed and then I would assume it worked.

I used to believe that I was the only real person in the world and that everyone else were fake things!

I used to think that I was the only real person on earth and everyone was like in a big play to make my life seem normal.
(I still think that random people passing me are hired to do that!)

i used to beleive that i was the only normal one on the planet, ( a bit like the truman show ) that everyone would speak a different language when i left the room, and there were hidden cameras watching me. AND that people watched me in the airvents.

When I was younger, I thought that there was a camera following me where ever I went. People would watch me all the time. The camera would also hear what I thought, so if i thought something inappropriate, I would immediately blush, because I thought people would hear it.

I used to believe that my life was a book someone was reading or a movie that someone was watching, and even now I kind of still do.

When I was younger I used to make believe that cameras followed me around and that my life was like a movie...part of me knew that camera men werent really following me everywhere i went...but when i would walk alone it would make me feel better because i thought that in case something happened they would be there to help me...i actually did this up till high school haha

I used to think that everyone was watching me wherever I went, and one day, I was out shopping like all day and I refused to use the bathroom because I thought a stranger would be watching me. It was scary.

I always, and kind of still do believe that everyone can read my mind. Like if I am thinking of something bad or dirty (dirty more or so in my later years :P) then i will try to think of something else because people will read my mind and make fun of me. And when i was 9, i formulated a idea that everybody else had the pwer to read minds but i didnt, and they showed me fake things proving it wrong so i wouldnt feel bad.

I used to think that i was being tested, and that the world was small, everyone knew everything about me, could see everything i did, so i would cover myself up when i went to the bathroom, and would curl up in the bath so nobody would see anything... i also thought that if i ever told i lie they would all know it and laugh behind my back.

Shortly after the Truman show came out I decided that my life was like the Truman show. I came to this conclusion because in Elementary school I always bought books from the Scholastic book fairs and book orders. On most of the books I bought I kept discovering this little tiny green circle on the cover which I was sure was a camera. The situation grew from there. I remember a couple of times being in the bathroom and talking to the cameras saying that they were sick for putting cameras in here and if they were going to film my life they should at least give me my privacy.

I used to believe that other people only existed when I was around, in other words I was the only real person in the world, everyone else was around only to add background noise and situations.

I thought that people where just pretending to be like me when i was around them, that when i wasnt around, they all took on their true appearances of giant monsters, i was some kind of experiment. I was about 6

When I was little after watching the movie "The Truman Show" I was freaked out and kept looking for cameras all over the place. although I know that's not true it keeps coming to my head.

I watched The Truman Show when I was about eleven, and it permanently engraved into me a deep suspicion of surreality.
I used to totally believe there were invisible cameras everywhere I went, in corners and mirrors, and that everyone was acting around me. I did some pretty embarrassing stuff trying to catch people out!
It's still there to an extent, teasing at the back of my mind. I've never been convinced of my own privacy since.

Of course, when you're little, it's only natural to believe that the world revolves around you. I took this to an extreme, however. I used to think that my life was a little like the Truman Show (before it existed) - everyone knew me and the people I met were only pretending not to. People were assigned to be my friends. No-one liked me. My family had to put up with me as a punishment.

On one level I knew this was ridiculous, so one day I devised a cunning plan to find out for sure. In a fight with my sister I screamed "Everyone in the world knows you and hates you and we all have meetings about you when you're asleep to talk about you!". For sure, if it wasn't true, she'd just call me stupid. "No way!" she cried, "that's what we do with you!".

Well, you all know that I know, so you can stop it now.

I think you know, don't you!