Toys come alive at night when you're asleep

This section contains beliefs all on a common theme: Toys come alive at night when you're asleep. 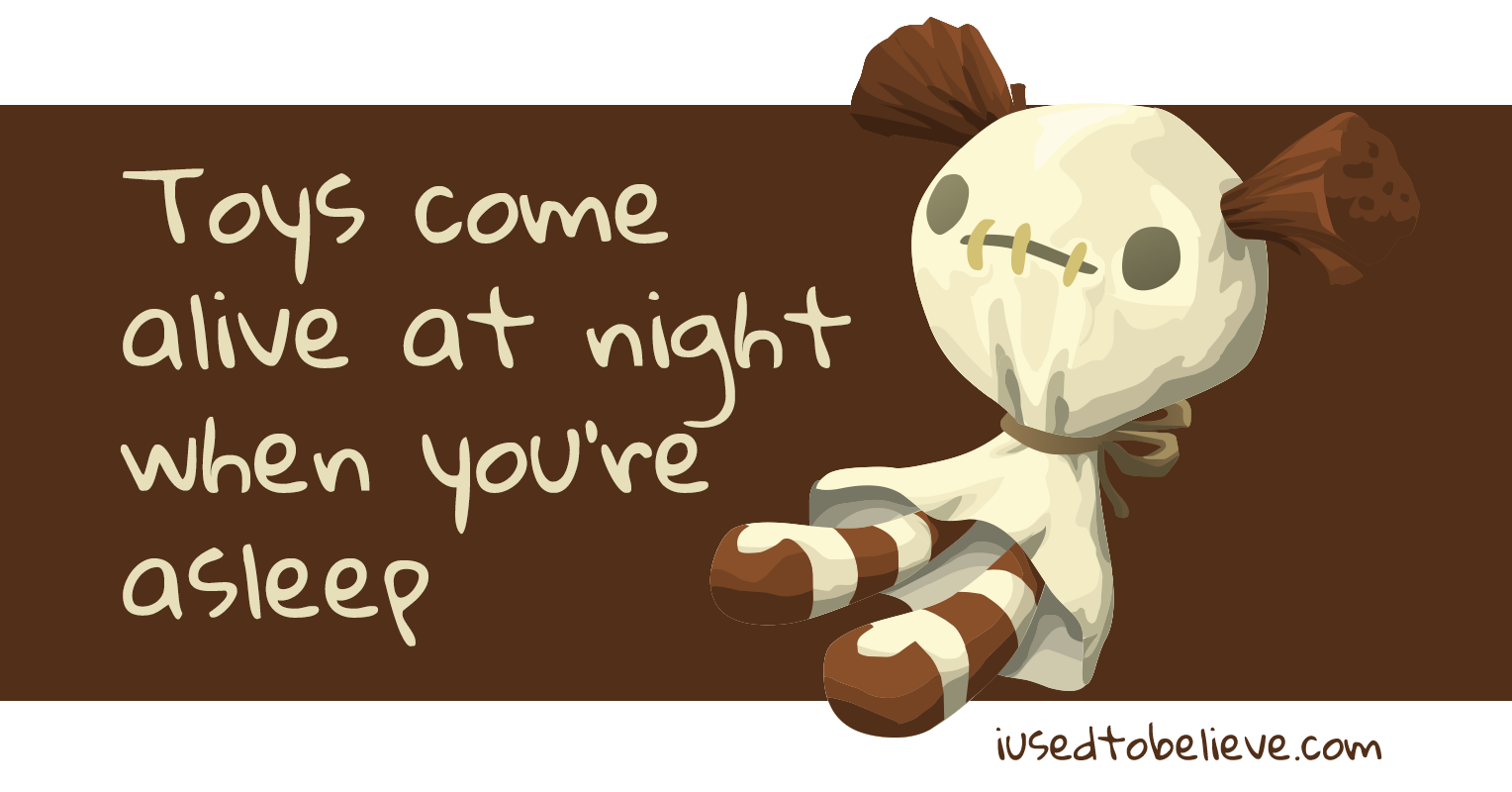 Show most recent or highest rated first or go back to toys.

I used to believe that toys had life

When I was little I used toi believe my toys were alive. When I left my room, my toys moved. To be sure they are alive I talk to there.

When I was little I used to believe my toys were alive. When I left my room, my toys moved. To be sure they alive I talked to there.

When I was a little girl I used to believe that my tpys talked and played when I was asleep in my bed.
After watching toys story in which toys of the little boys talk and move during the night when the child sleep.
After i watching the movie i waited during the night to see my toys moving.
Now im afraid of something else if I abandon my soft toys they want to KILL ME.

I Used To Believe At Night My Toys Would Get Up, Walk Around, Try To Talk To Me, And Dance/Sing

When I was a child I used to believe that teddy bears could talk to me at night.

When I was younger,I used to think my toys can moved and spook when I wasn't at home like in toy story :-)

When I was younger, I usesd to believe my teddy bear was living at the night.

When I was younger, I used yo believe my toys speak ther night and do a mission

when I was younger, I used to believe that my toys would live at night and sleep at day light

I believe toys come to life I watch their every moment plus my cousin believes the same thing soooooo we share things we have seen about our toys.once I saw my toy blink,move,breathe so I take videos hoping to see em move I have not not Yet but sometime at night at 11:00 or so I would stay real quiet not dated to make a movement I would most of the time hear soft footsteps walking about I knew it wasnt my little sister she falls asleep about 9:30p.m.sometimes I would sleep with a toy but then the next morning it would be on the floor plus I've seen my toy move only once so now I'm trying to caught them evan more along with trying to figure out how to make stay alive so we could be best friends.

I used to believe that toys had life, I believed it after seeing the "Toy Story" movies. So I spent moments looking at my toys to see if at some point they would move, that never happened, but I spent like two years believing it would happen.

When I was younger I used to believe my toys are alive like in Toy Story.

I had the "toys are alive like in Toy Story" belief up until I was freakin' thirteen!

But that's not all: when I was eightish, my mum told be this huge lie that when you can't find a toy that's because it's gone to a place called "Adventure Land".

Even me, logical little miss that I was, believed in a place with that phoney-baloney name for three darned years!

She was so adamant about this lie too: she claimed she'd witnessed her teddy bear trying to go there, that there was one place in that phoney world where no cats were allowed, and there was a literal all-you-can-eat buffet.