This section contains beliefs all on a common theme: In the alphabet, L-M-N-O-P is one letter, pronounced elemenopee. 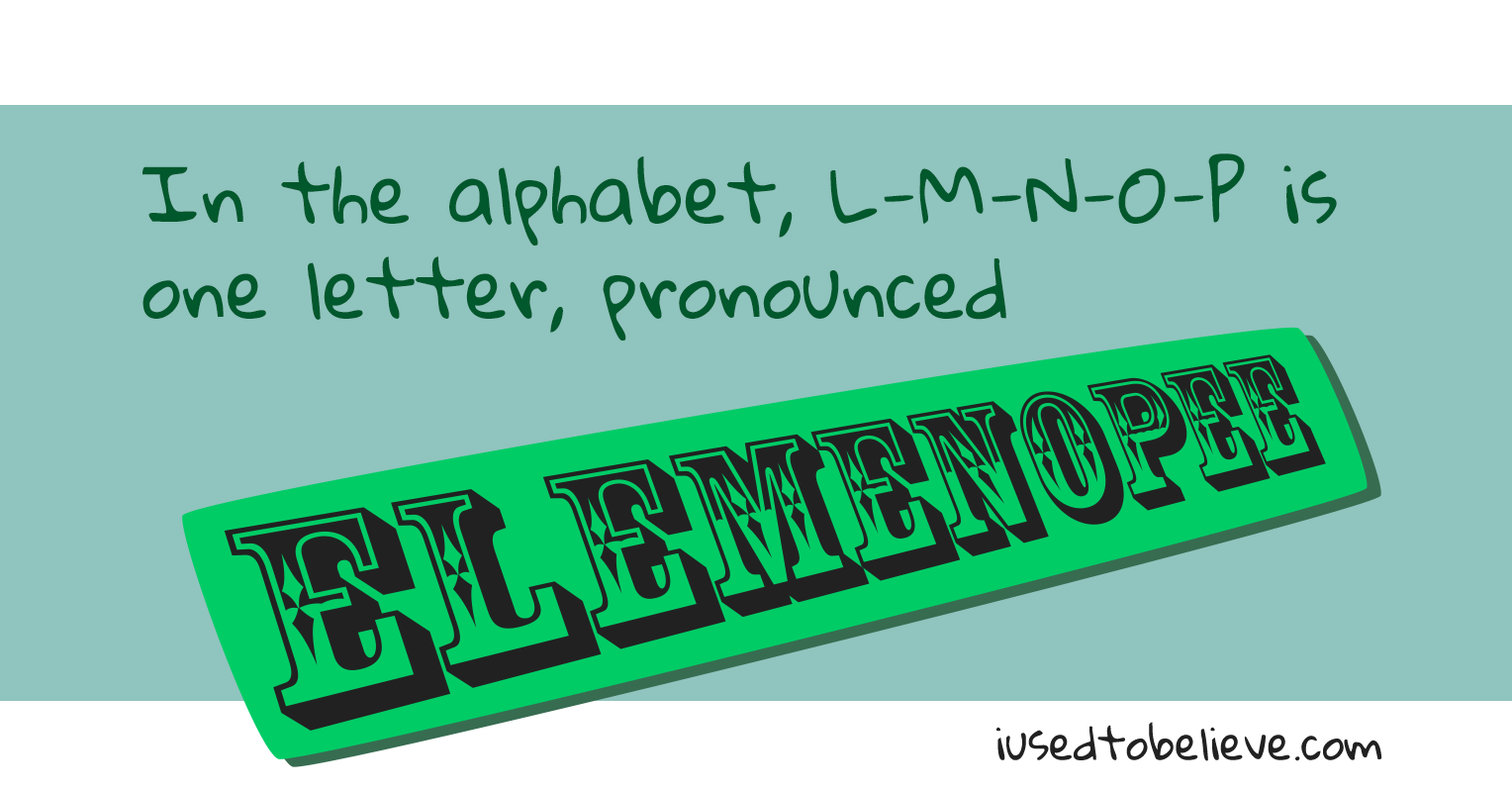 Show most recent or highest rated first or go back to spelling.

When I was 4, I used to think LMNOP was one letter, Ellemenopee. I used to sing like this:
ABCDEFG
HIJKELLEMENOPEE
QRSTUV
WXYZ

when i was little i thought in the alphabet when you say l m n o p....i thought that was all one letter pronounced elemenope ahahahhaah.

I used to believe that there were two kinds of "P": the regular one, and the elemeno P.

When I was little, first learning my alphabet, i thought that LMNO was one long letter since it is said so fast in the song!

I used to believe that when people said the alphabet and they got to "L, M, N, O, P" they were actually saying "a lemon o' pee", as in a lemon full of pee. I thought the reason lemons were yellow was they were full of pee, and could never figure out why you were given a slice of lemon with water or tea or whatever at restaurants. I had no prolem with lemonade though, not really sure why.

I used to believe that the letter "N" was not in the alphabet song.I knew it was in the Alphabet,but not in the song.this is what i thought:
ABCDEFG,
HIJKLM"and"OP,
QRSTUVWXY and Z
I believed that until i was about 8!

When I was little and had learnt the alphabet, I used to think 'l m n o p' was one letter and i used to pronounce it like - ellemenohpee, and say it as quick as i could. Also because my name begun with M, I used to tell people to call me by another name, because M wasn't in the alphabet, because it wasn't important enough.

When I was learning the alphabet,I thought elemeno was one word.

I used to think that wher wver you said "LMNOP" as "elemental pee" by mistake, someone would wet their panks. I tried it out on bullies, but it didn't work.

I used to believe that the alphabet was just a song and L,M, N, and O was a word in the chorus...."ELLAMENO". I was quite surprised to learn that these were letters and not a word.

when my sister was learning to talk (lemme tell you, she talked A LOT) and most kids think that l-m-n-o-p is one word (elemenopee) but mi dad started to notice that my sister included k so it was kelemenopee. so then i made up a definition for it. i told people that kelemenopee ment the same as jiberish. even now, almost 10 years later, i sometimes use it instead of jiberish.

I used to believe that Ellamenopee (LMNOP) was the biggest letter of the alphabet. Whenever I would sing the alphabet song I dreaded that letter.

When I said the alphabet, I thought "LMNOP" was one letter, pronounced "elemenopee".

I also thoguht that X and S were the same letter, so It didn't matter if I mixed them up in the alphabet song, which I did alot.

When I was learning how to spell my name, I had trouble finding the letters for it in the alphabet because I thought that elimenopee was one letter. My initials were LPM

when i was younger singin the alphabet, i'd say a b c d e f g h i j k ellemenop lol