This section contains beliefs all on a common theme: Bloody Mary. 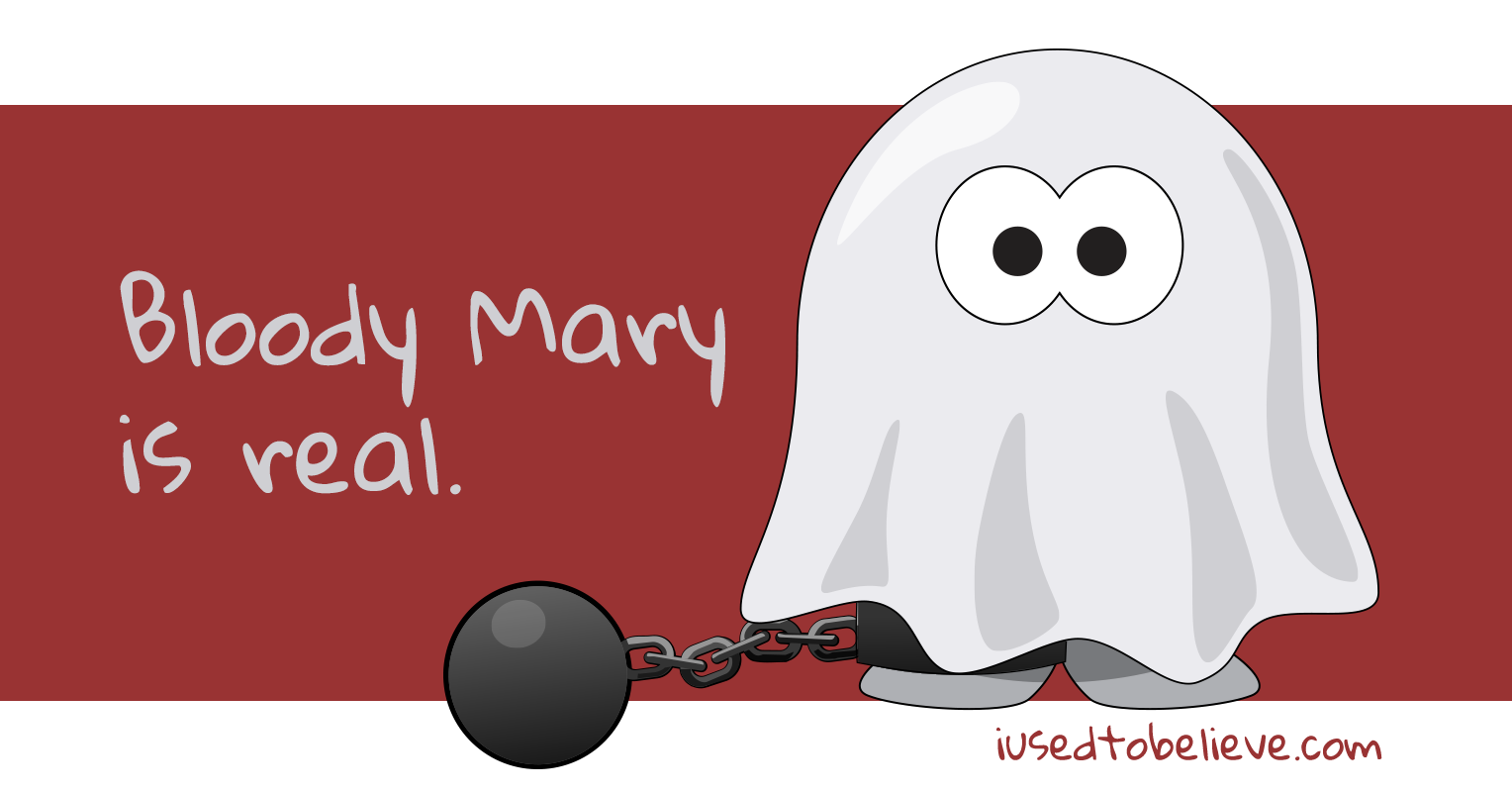 Show most recent or highest rated first or go back to ghosts.

When I was a child I used to believe that Bloody Mary was a real game, played at night in front of the mirror in a bathroom. I was very scared.

I used to believe in Bloody Mary, the ghost that you call in the dark in front of a mirror in your bathroom late at night. One day my brother came in the bathroom and put on the light, I got scared and never called Mary again. Now I still don't want to stay in the dark in my bathroom!

When I was in grade 1, my cousin told me about the infamous, Bloody Mary.
My best friend and I always planned on summoning her. But till today (I'm 15 now) we haven't gathered the guts to do it.
Until yesterday when I did try BM. And all I saw was colorful splotches from going round and round too much. BM never came. I'm pretty convinced that she was busy scaring some other kid.

one night i was 7 yrs old my sister told me to do blody mary well i went into the bathroom said bm 3times it was my birthday i closed my eyes spun around 14 times and then it happend i started to choke i heard a voice in my head say happy birhday ready to meat your death? i opend my eyes i saw some whon in the mirror my sister came in and turned on the light i never did it again

i used to belive that if you hang your hand off a chair Bloody Mary would come and kill you. yeah i was weird. lol

Like a lot of people I was scared of "bloody mary" showing up in my bathroom mirror.

However, I always imagined her as the Wendy's character girl. I don't know why, probably because she was the only red-headed person I had ever seen.

when i was little, the neighbor kid (really mean boy) used to tell me that if i was standing in front of a mirror in the dark and spun around 3 times and said "bloody mary, bloody mary, bloody mary" then a headless bloody mary would come thru the mirror and try to steal your head. he told me that he cought his sister doing that and dove and got her out of the way JUST in the nick of time. i totaly believed this until i was like 16 or so! some boys can be so mean to little girls.. :(

Ok. This is a true story that my friend told me. Her friend did Bloody Mary in the bathroom, and then, the next day, she was walking by a barb wire fence, and it turns out that one of the wires where sticking out, and it made a huge whole in her head. I have never seen her since.

when i was younger i believed in bloody mary. One night i decided to try it out.I got everything ready and began to get a little bit shakey and then closed the door.the light was on out in the landin so i thought i would be all right.Then i said BLOODY MARY BLOODY MARY BLOODY MARY ect.Then the entire room went cold and no windows were open then i couldnt breathe and tried to get out of the bathroom but i fell and couldnt get back up and thats when i saw a lady in the bath with no eyes she grabbed my hand and started screaming i started screaming and then everything dissappeared.Then i ran out of the bathroom and a few hours later i looked at my hand and it was red the scar never left me.Whenever i look in the mirror i see her and she scares the shit out of me.DONT TRY THIS ANYWHERE ESPECIALLY IN SCHOOLS

When I was 5 or 7 years old my brother and sister told me about bloody mary. They made me go in the bathroom, how we did it was we helded hands, turned off the lights, say "bloody mary tell us your story " and spin around and keep glancing at the mirror until she appeared. After 5 or so I saw blood run down the mirror and then a old lady in a rocking chair sitting starring at us then blood ran down the mirror again, then a mans pictured appeared in the mirror. I turned on the lights and ran downstairs it still haunts me today and I can't stand being in that bathroom with the lights out for more than 5 seconds. Don't ever try this!!!! She will haunt you someway.

When i was younger i believed in bloody mary my cousin told me it wasnt real but i decided to try it out.After 2 years i got it all ready but then i backed down. NO I SHOUTED TO MYSELF BLOODY MARY BLOODY MARY BLOODY MARYCOME GET ME.Then the entire room went silent and cold then i couldnt breathe and tried to get out of the bathroom and then i saw a woman in the bath and she began to scream at me i couldnt get the sound out of my head dont try this kids

my friends and i were at a party and i said lets do bloody marry! me and my friend emma both did it and no one else because they chickened out. we never believed this because we thouight it was fake. so we went to the bathroom, locked the door and windows, then turned off the lights. We said bloody mary three times, and all that happened was the lights flickered. so we went to bed with the rest of the girls. but early that morning, we all woke up to emma screaming, we walked over and her neck and hands were bloody. thank god she was still alive. i walked her to the bathroom to wash of the blood, but in the mirror there was a flashing image of bloody mary, and written in blood on the mirror was, You chanted my name, so you paid the price, be thankful i havnt killed you yet. we all thought it was emma but she swore it wasnt her. two years passed and on that same date, emma disapeared. we found her the following week murdered in the park's bathroom, with that same writing from bloody marry, the night of the sleepover.

When I first heard Bloody Mary I tryed it but I think I only said it two times cause I was to scared to go on I was sooo scared when the lights went off ( we now have auto lights that go off if the don't see monemt) I jumped up and waved my hands like a idoit cause she gets you when it's pict dark and that bathroom didn't have windows....

When I was younger, I first heard about Bloody Mary.

My friend tried it twice at a party last week, and both times she saw a strange light in the mirror.

Then she, 2 other friends, & me tried it, and we heard screaming

When the party was done, my other friend tried it at home, and she saw a strange light in her bathroom.

When I was in 3rd grade, my friend Katie, told us the "legend" of Bloody Mary. She said to conquer her up you go into the bathroom with a baby doll and say "Bloody Mary! I have your 's' baby!" And then her "f", "d", "h", "a", and "b" baby. She told us then she would tear off the doll's head and then she would vanish and wings would appear in the mirror. Then she told us white wings meant she was gone for good, blue wings meant you were safe for right then, and red meant she was coming back that night.

I used to believe that if you go in the bathroom at night and turn the light off and say bloody mary 9 times, she would either appear in the mirror, or come get me.... How about I STILL do believe that...lol

im pretty sure everyone has heard the Bloody Marry story..

when i was 10 i went to my first ever "sleep away" camp where u actually stay there for a week or two.. the first night they jumped right in on scary stories but their version was "the girl with long blonde hair"...

in the story the girl with long blonde hair was trapped in the bathroom and if u were there alone she would kill u and make u take her spot..

she came out of the mirrors or toilets..

lets just say i only used to bathrooms in case of emergency and only took like 2 showers...i even ran out of there screaming cuz i thought i hear her calling my name

in the first grade a boy in my class told me about BM (bloody mary) and iff you had a mirror in front of you and behind you and you said her name she would come out of the mirror and kill you .to this day i cant even say her name out loud the thought of her scares me so bad . i still run out of the bathroom as fast as i can and i cant look in the mirror ( im 15 years old)