Chucky from Child's Play was real

This section contains beliefs all on a common theme: Chucky from Child's Play was real. 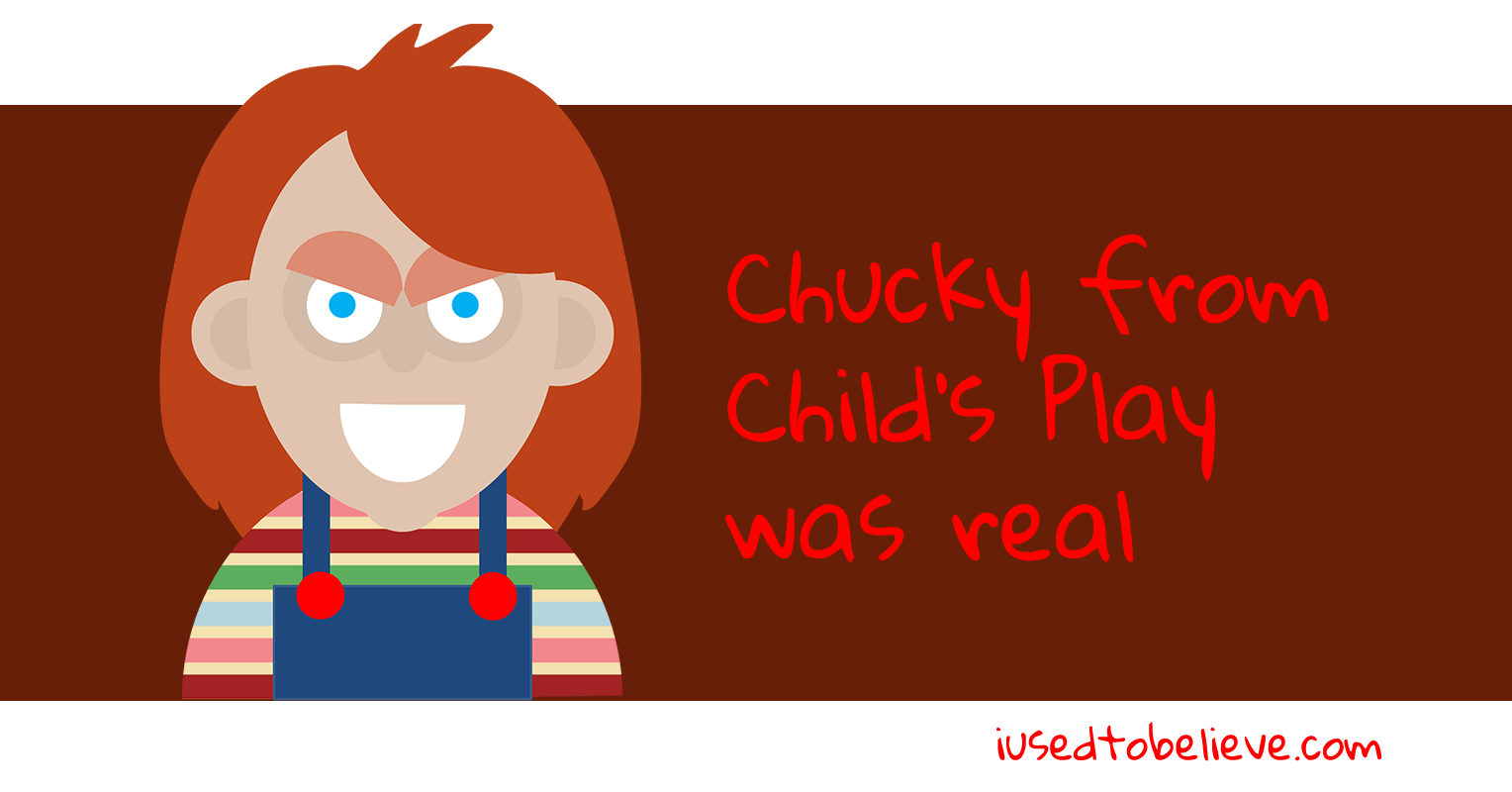 Show most recent or highest rated first or go back to films.

a year ago i watched a chuck movie i was sooo scared!! i had to take a bath after i was looking everywhere to make sure he wasn't there. when i went to bed i jumped on the bed cuz i thought he was under my bed. i was 9 im 10 now. im still scared!

I was 7 years old when I first saw Chucky, and he scared the bejeebers out of me. We lived in an apartment at the time, and I was convinced that he lived with us too. The only way to get rid of him was to keep all the lights on in all of the rooms. So I'd keep them all on, in every bathroom and closet. When my parents got home from work, they used to be really mad at me for keeping all the lights on. But hey, what's better: a lower electricity bill, or saving yourself from a fictional killer doll?

I use to believe Chucky from "Child's Play" lived in my bathroom. So everytime i past by the door i would bolt by quickly to avoid him catching me. Also i was afraid of the toilet eatin me when it flushed. Dont know why...

I used to believe that if I went into the bathroom (I was like five or six years old), without anybody in the next room Chucky the evil doll from the movies, would sneak up behind me and kill me. I used to be really scared of Chucky, but I'm over it.

I use to believe that Chucky (the possessed red-headed doll) would live in showers behind the curtain. I was always scared to go in a bathroom if the curtain was closed.

I used to believe Chucky would come out of my toilet, stab me with a knife, and kill me. :(

I used to believe that chucky the evil doll lived in the woods across the street from one of my old schools,and that an evil candy man and his family lived under that school

That my doll was evil like Chucky and talked.I ran home all freaked out and crying to my mom.I later found out my sister and her friend had pushed the stomach on the doll when i wasn't looking to get the doll to talk.They had a good laugh at my expense.

I used to wach alot of scary movies when I was younger, And I mean way to young to be seeing anything scary i liked Chucky movies and vampire movies and since i wacthed so many of the vampire movies i have to have a blanket over my neck because it still scares me. Im 15.

When I was a child I believed Chucky from Child's Play lived under my bed. At night after everyone went to sleep, he would come out of his house and try to kill me. Whenever I thought he was coming I would hold my breath because I believed he would think I was already dead if he couldn't see my chest rise and fall. I also believed if my cat was on my bed he wouldn't come out because he was scared of my cat.

You know how in the film "Child's Play" the full name of Chucky the evil doll is "Charles Lee Ray"? Well when I first heard the name (I've never seen the movie) I thought it was the name of a REAL serial killer and was rather confused why they would make a story about a real (but dead) serial killer possessing a doll.

Mr. Spock: This belief is illogical :-)

When I was about twelve, my two-year-old sister got one of those My Buddy dolls for her birthday. Everyone thought it was so great because it was semi-interactive. The thing no one took into account was that right around the same time that stupid doll came out the Chucky movies came out. (Those who don't know who Chucky he is, he was a talking doll that murdered people...) I used to watch a lot of horror movies, and I hated that doll so much that if I saw it somewhere I would grab it and stuff it in the bottom of her toybox, hoping it would suffocate before it killed somebody.

when i first watched chucky. my brother had this chucky doll and i walked in his room and i thought i was going to die.

and i have this battery powered scotter and some times whin i try to make it move it wont move and sometimes i works on its own. it may be poessed or it just might be messed up we will see.

When I was younger I used to watch scary movies before I went to slep. I watched Chucky . And that night my" kid sister" doll looked exactly like Chucky so I got scared I threw her in the closet and closed the door. Then I realized that would probally make her mad!!! so I sayed up all night looking at the closet waiting for her to come out and kill me.

too many scary movies

When I was younger I was never allowed to watch scary movies, but we had this hamper in the middle of the hallway and fortunately enough the entrace to the hall was right there as well. When my dad would stay up late to watch scary movies I would crawl out of my bedroom and get as close to the hamper as possible to watch the movie and not get caught, and as a result of that I was afraid to sleep without a night light. I was scared Chucky was hiding under my bed and would climb out and try to stab me in the night but since I had a night light I would see his shadow and so he wouldn't attack me. I also used to think that when I went to the bathroom if the shower curtain was closed there was someone waiting to stab me so I would always check before going to the bathroom...I still do that sometimes when I use the restroom at a house I've never been to before.

I used to believe that all of my dolls were alive, but they were like the mean dolls like Chucky. So I would always pamper my dolls as if they were real so when I slept at night they wouldn't come and kill me!

I believed that Chucky from Child's Play was real and would come and kill me if I was alone in the room.

when i was 6 i watched one of those chucky movies so when ever i went to the washroom alone i would carry around a stick and leave open all the drawers in the washroom open. i believed that if chucky opened the door i would hit him with the stick and fill his mouth with toothpaste and make him suffocate.

My biggest fear was the Chucky doll from the Chucky movies. I always thought he was hiding in odd places in my house, like inside the toilet. I imagined that he had a group of invisible dinosaur friends who listened to everything I said and if I said the wrong "code" word, Chucky would decide to pop out of the toilet and grab me. Because of this I made my bathroom visits very short.

I used to believe that Barbie dolls came to life when I was asleep and that they would triy to kill you(like Chucky) because I tried killing the doll one time.