This section contains beliefs all on a common theme: All music on radio stations are performed live by the band in the studio. 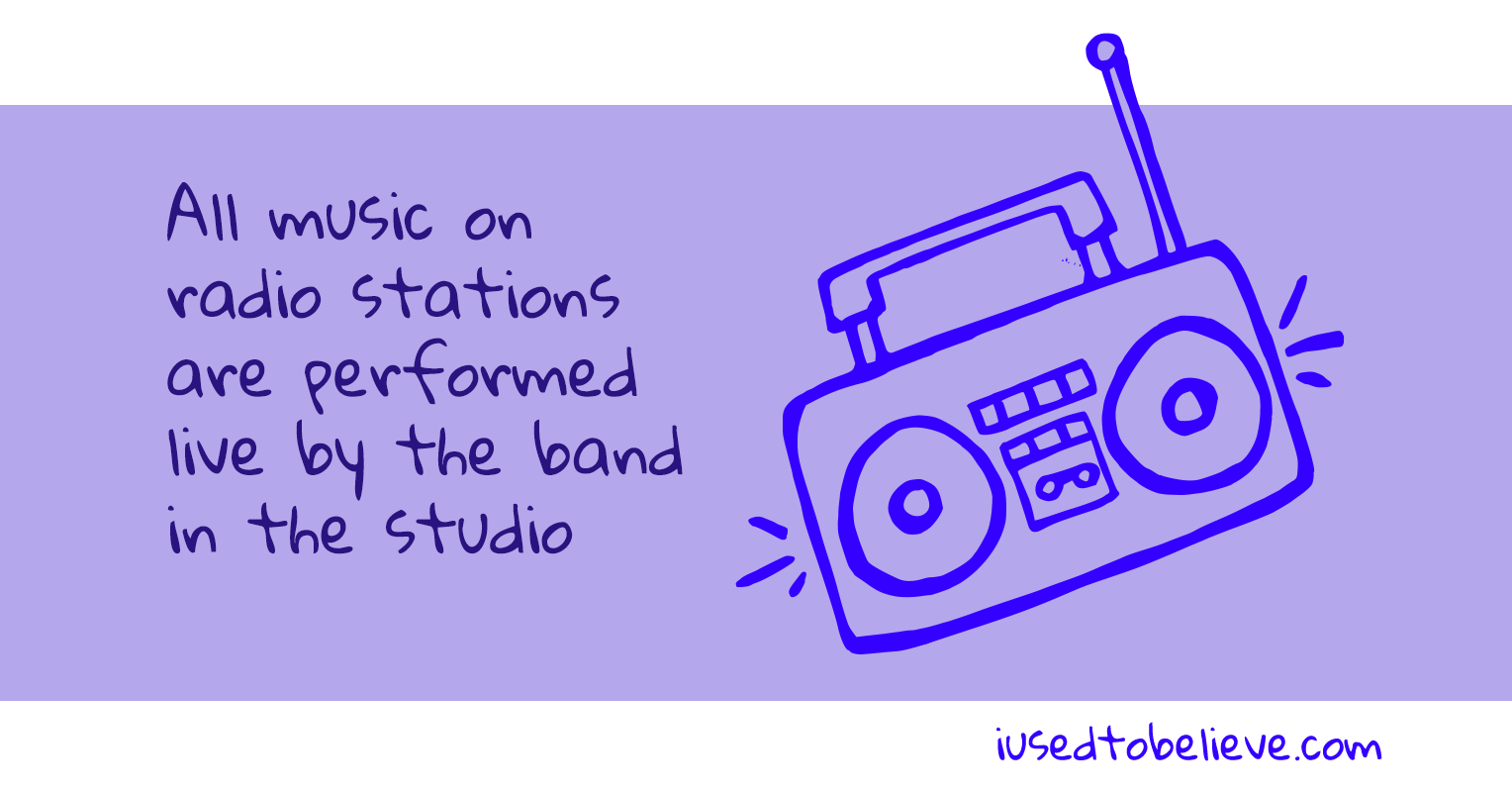 Show most recent or highest rated first or go back to radio.

When I was little, my parents had really good quality speakers in the back of the car. So whenever we rode with the radio on, I thought the band was playing live in the back of our car, and was always baffled when I turned around and couldn't find them.

When I was little I always sat in the backseat of my dad's truck with my head near a speaker. I used to think that there were live beetles inside each speaker playing every song because the only band I had ever heard of was the Beatles.

When I was little I thought that the singers and bands I heard would sit around the radio station waiting for their turn to play their songs. This meant the each radio station had different performers and I worried that this was boring and it was hard to wait all the time and that the performers had to work very long hours.

I used to believe that people lined up outside of radio stations to play their music. One day I heard Elvis on the raido and my mom told me how said it was that he died, I said "he must have just died like 10 minutes ago because he was just at the radio station playing his music"

When I was little my mom would always have the radio tuned to the country station in the car. Because there was always a song playing, I thought that every singer was in a studio somewhere, with a little box at their feet with hundreds of little lights on it. If a light was green, it meant someone had the radio on somewhere, and the person knew to keep playing/singing. I always imagined country stars hanging out between songs, sleeping propped up on a bench in a tiny hallway, with a hat over their eyes and a guitar in their laps, just waiting for their turn to sing again.

I actually once thought that all music played on radio was performed by live bands. So when one time the music abruptly stopped and the song changed I thought the first band had been murdered and the second band just quickly came in and started playing.

I used to believe that the songs on the radio were being performed live at the radio station at the time I was hearing them. (But not by small people inside the radio as I've heard others believed.) I finally got the hang of it when I saw a band playing on a TV show while the song was on the radio at the same time and I asked my big sister about it.

I use to believe that all the singers and bands went in and out of my local radio station to sing a couple songs every day. My brother was going on a radio station tour one day and I asked him to get me as many autographs as he could. (He laughed, and I learned the truth! I liked my idea better!)

i used to think that when the radio stations played my favorite songs on the cd's that the actual artists would be at the studio playing the song. It amazed me that they could play on two different radio stations at once

When listening to the radio in the mornings I felt sorry for singers they had to come and sing that early.

I used to believe, like alot of people, that the bands were playing live at the radio stations. One time I was listening to a song, and my mom turned to a different radio station, and then the same song was on. I was VERY confused as to how this band (whose name I forgot) could be in 2 placed at once!

I used to believe that when I listened to the radio, all the bands were standing around somewhere and would play when teh announcer pointed to them! Must have been a biiiiiiiiig room :D

When I was a kid, I believed every single song on the radio was performed live at the radio station. I pictured singers and bands lined up ready to play their song. I thought when a popular song played the band had to stay at the radio station all day so they could play that song a bunch of times.

When I was about 7 or 8 I used to believe all the songs played on the radio were being played live in the studio by the musicans :P

I used to believe that the people singing on the radio were live and at the radio station singing. One time, my mom and I were listening to the radio on Christmas eve night, and I asked her, "How come there are people singing tonight? Shouldn't they be home with their families for Christmas?" That's when she told me that it was a recording.

I used to believe that there were actual little people in the trunk of the car singing when ever my parents turned on the radio.

I used to think that the bands were playing live at the radio station. They'd set up, play one song then go home.