People on TV can see what you're doing

This section contains beliefs all on a common theme: People on TV can see what you're doing. 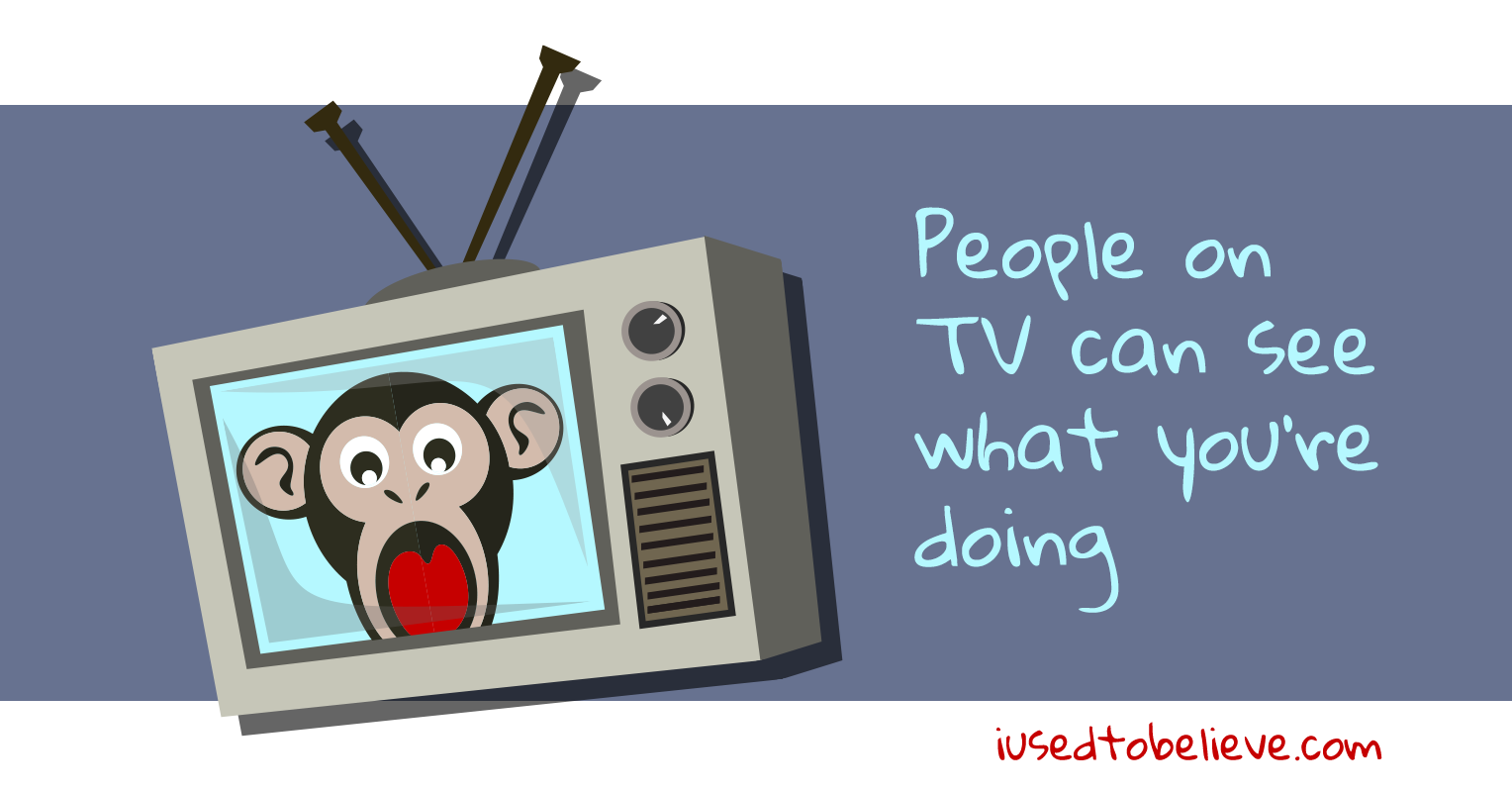 When I was a child I used to believe that the people on news was watching me too, through the screen.

I used to believe that the people who give the news on television could see what you were doing, so always with my sister we tried to change before the news.

I used to believe the person who are in TV programmes heard me when I was talking to them but one day, when I told my favorite TV hero to save the girls, he didn't do it, and I realized the TV didn't hear me, Today I realize I was stupid to talk to my TV.

When I was a child I used to believe that actors could see me through television.

Im not sure if i actually believed this or not but i remember asking my mom about this when i was little. we were watching a show on TV and i asked my mom if when we turned the TV off, the characters on TV were watching us. i guess I had this idea that we watch the characters but they also watch us.

I believed that people on TV were real and didn't know they were being watched. So on the weekends I'd put on a disney videos so the people watching me on TV could focus on that instead of me.

I used to believe that people on television speak to me & look at me !

When I was a kid, I used to belive that the people inside the television could se me, so often I would hide under a blanket.

When I was little I thought that the people on tv were actually living in the tv and I wanted to figure out how to get in to play with them. My grandmother always asked for her robe when a show was on because she didn't want the stars to see her in her nightgown.

When i was younger i used to believe the people in televisions could see into the room and know what we were doing.

When I was about 8, I was wondering how they knew what kind of people watched TV shows, since I'd heard things like "75% of our viewers are male!" or "800 people watch our show!" and so on. I came to the conclusion that they had cameras in every TV and could see you while you watch it and judge your reaction.

I'm about to turn 14 and I STILL refuse to change clothes in front of a TV that is turned on. Lol.

I used to believe that the people on TV could see you. Just like you were able to see them. So I would never change clothes in front of the TV while it was on. My older, and wiser sister, told me that "they" (the people inside the TV) could see you even when it was off!! That was 45 years ago and I still don't have a TV in my bedroom - just in case "they" really can see!

My mother always allowed my sisters and me watching movies like Ghost, Dirty Dancing and Pretty Woman... (you know, all the super appropriate movies for kids). And I used to believe while watching TV that the people in movies and television shows could see me, I could especially tell in those intensely emotional close-up shots in those movies. I would curve my eyebrows and try to be dramatic subtly during these moments thinking maybe they would adopt me to Hollywood as a terrific talent. I was also very scared to pick my nose while the TV was on...just in case that made them change their minds.

I used to be scared to go behind the television because I thought the people in the TV were very tiny and acting behind the TV. I thought when the show ended and you changed the channel, they would still be watching. Every...Little...Step!

Dont Look At Me!!

I used to believe that when you watched the tv, the people on the shows could see you at home through the screen, it took me a while to realise that wasn't the case. Also I used to believe every show was live and nothing was pre-recorded.

When I was about 3 I was watching an M&M commercial and I was pickin' my nose, and then it hit me; if I can see them in the TV, they must be able to see me too, I imediatly stopped "digging for gold" and ran to my mom and asked her" can the people in the TV see me too?" she said no so I nran back to the TV and started picking my nose again! :)
Just so you know I dont pick my nose anymore!

I used to believe the people in the TV could see me, so if i didn't like the show i would say "oh man, you guys stink!" and if i liked it i would say "you guys are awesome!" and my mom never told me they couldn't here me.