People on TV shows live inside the television

This section contains beliefs all on a common theme: People on TV shows live inside the television. 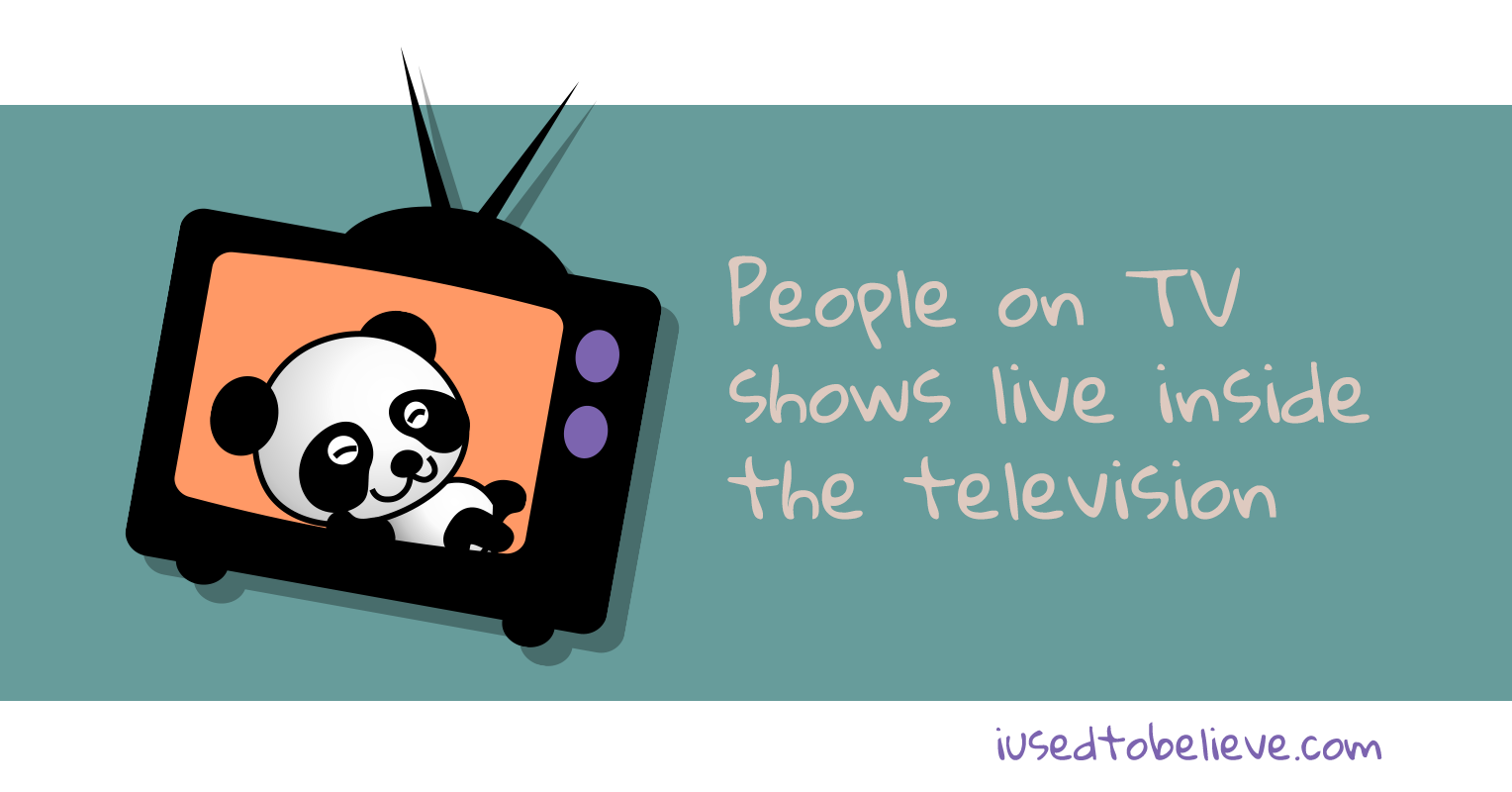 When I was younger, I used to think when I saw a video I througth the people did the video in live.

When I was a child I believed that on television there were people inside it, I had asked my mother and she said that they are small people who get into the telvision and live inside the telvision, I stopped believing in that at about 12 years old jaja

I used to believe that there were people behind the TV playing in the program.

I used to believe that the people were inside the Tv 😐

As a kid, I believed, like many other kids do, that tv's really had the people inside. I also believed that when you sent a fax, the paper actually went through the wire lol, instead of being printed into the other machine, and one other belief was that the vintage times really were in black and white, instead of just photos.

I used to think that the journalists lived in the television.

when i was a child, i used to think the people that appeared on tv were inside it.

When I was young and we had an old big TV, I used to believe that the people who appeared in the screen were really inside.

I used to believe that the tv had little men and women moving in there.

I used to believe that the people who we see in the tv were inside it and I always looked behind the tv yo te and get them out of there.

I used to think that if you broke the TV screen all the pictures would fall out, like, they were all stacked in there somehow.

I used to think that people on tv shows lived inside the tv.

My cousin thought that if you cracked the TV screen all the small people inside would be set free and come out.

I used to believe that whenever I put a video in to my TV that all of the characters would have to perform the whole thing again and that their performance would stream directly to my house. I was really impressed that they never forgot their lines or appeared to age.

I am 40 now,but while still a kid,I would think there were actual people ,that is,small people in radio sets.Otherwise,what made radios speak! I figured some sort of specially made people who were chosen to sing,read the news in radio sets and when the radio was quiet,it meant they were tired or fell asleep.

TV had a great power over me. When I was about four years old a program featured a train coming down the track heading straight for me. When it appeared to be too close I jumped out of the way.

Another time I fell in love with the Old Gold cigarette girl who danced in the commercial. I thought about breaking the TV screen so I could jump in and join her. (Never tried it though.)_

I used to believe in the early 1960s that the people on the TV screen lived inside the TV and I would go up to the TV really close and try to talk to them.