The moon follows you

This section contains beliefs all on a common theme: The moon follows you. 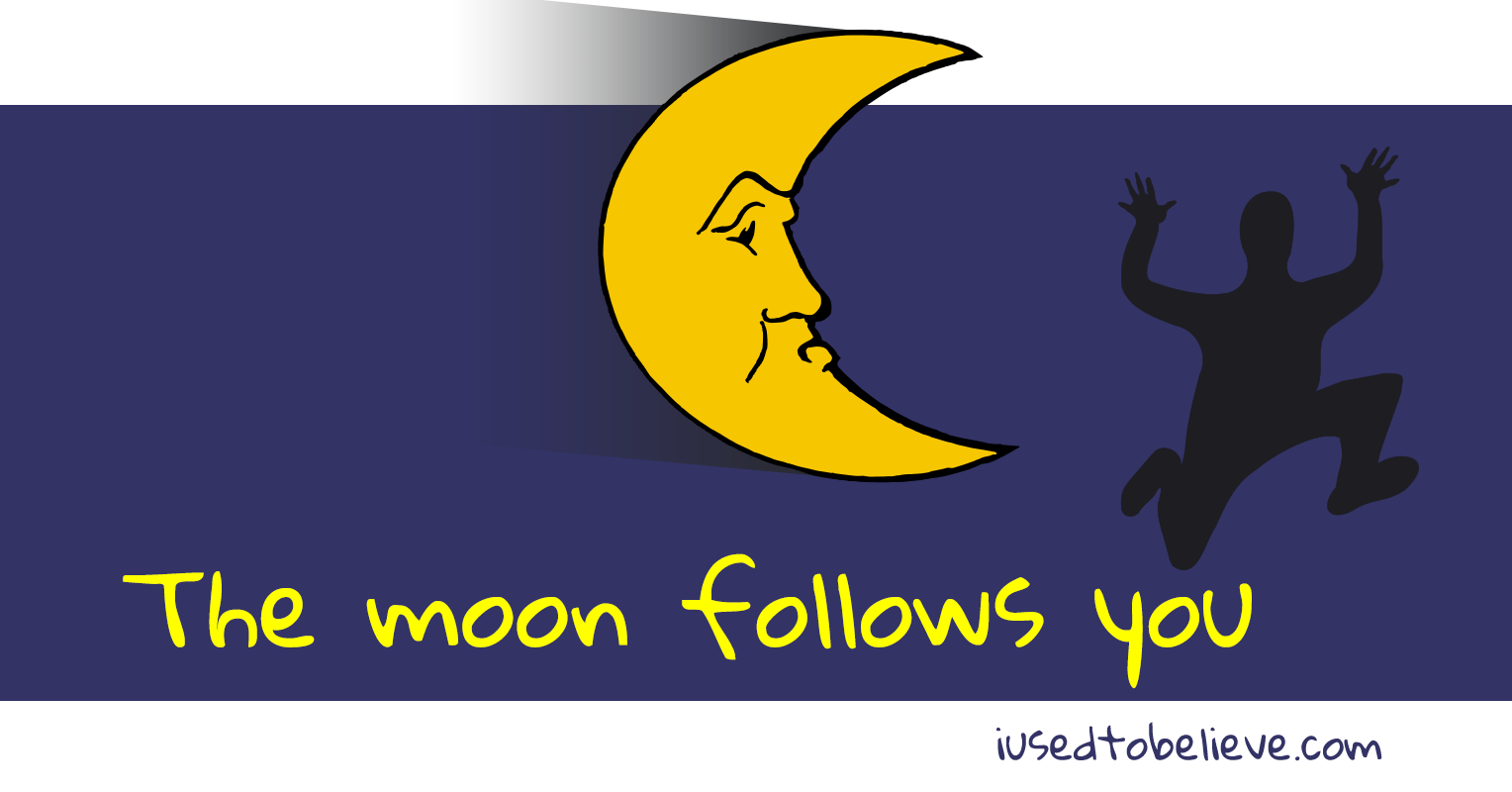 Show most recent or highest rated first or go back to outer space.

Walking at night my 4-year-old daughter kept staring at the moon above the trees. "I think the moon's following us," she said. "Papa, you stay here." She walked about 100 feet, staring constantly at the moon.: Then she stopped and called out, "Papa, come here!" I did, while she kept gazing at the moon. Then she said,"No, it's not following us. It's only following ME!"

When I was about 4 or 5 i used to believe the Moon followed me. My mom had a Volkswagen Beetle and, when driving at night, I would sit on the back seat, facing the back of the car and update my Mom during the whole trip on the Moon status. "It is still following us", I would say. Sometimes, when she turned on a street where the Moon couldn't be seen, I would tell her that she was going too fast, because the Moon couldn't keep up with us.

While riding in the car with my mother one night (around 5 years old) I came to the conclusion that the moon followed me.

I didn't believe that about the sun, though, because my mother had already informed me that "the sun doesn't rise and set for Sandra."

I used to believe that the moon followed me everywhere I went.

When I was a little girl, I used to think that the moon was following me. In the evening when I was drinving back home from people. I looked behind me and I saw the moon, I did not talk to my parents but I was scared, I spent my entire trip back, watching the moon and wondering if "she" was really following me I used to think that for a long time, but now I do not believe it anymore

when you're driving along it looks like the moon is following you.so when i was small i used to think that the moon was trying to get me.i used to cry everytime we went driving at night ,coz i thought it would come and eat me

At night when I would be driving in the car with my mom, no matter where we went, of course the moon was there. I asked my mom why and she said it follows you everywhere so you can see. I hated this so I would get mad at it and yell "STOP FOLLOWING ME!" I remember once I even refused to leave the house because the moon wouldnt leave me alone.

i used to believe that the moon was stalking me.....everywhere i went...there it was...waiting till i wasn't paying attention and just crush me....

when i was little my mom would try to keep me busy while driving home in the car at night by telling me to look out the car window and watch the moon follow us home. i thought the moon actually moved along with the car for the longest time, and it made sense since the moon was there when we would get home.

when i was little, my dad used to take me for evening rides in his motorbike quite often. and every time i looked at the sky and if i saw the moon, i would wonder why it was following us. i observed this for sometime before i asked him: "dad, why does the moon follow us all the time?!"

I used to believe that the moon chased you. I know I know, strange right? XD well I would get really freaked out when I ever got in a car because as I looked out of the window the moon appeared to be following the car through the sky

When I was little I used to look out the window of the car and think the moon was following. I thought I was special and magical since it seemed to be moving with me.

When we would be driving at night, I used to believe that the moon was following me. Every so often it would disappear behind a tree and I thought I'd tricked it!

I used to (and still kinda do if I'm real bored on car trips) That the moon followed me. I would somtimes get frusterated that I couldn't follow it. That it was always following me, but never the other way around. I felt kinda special though. I would sometimes try to "trick" it, to see if I'm really that special that it wants to follow little old me around!!!

i used to think that when we were driving the moon followed us.

I used to believe that the moon followed me around wherever I went. Going on car trips with my parents, I'd look out the window and it was always there... following me. Actually it still does!