Thunder is the sound of God bowling

This section contains beliefs all on a common theme: Thunder is the sound of God bowling. 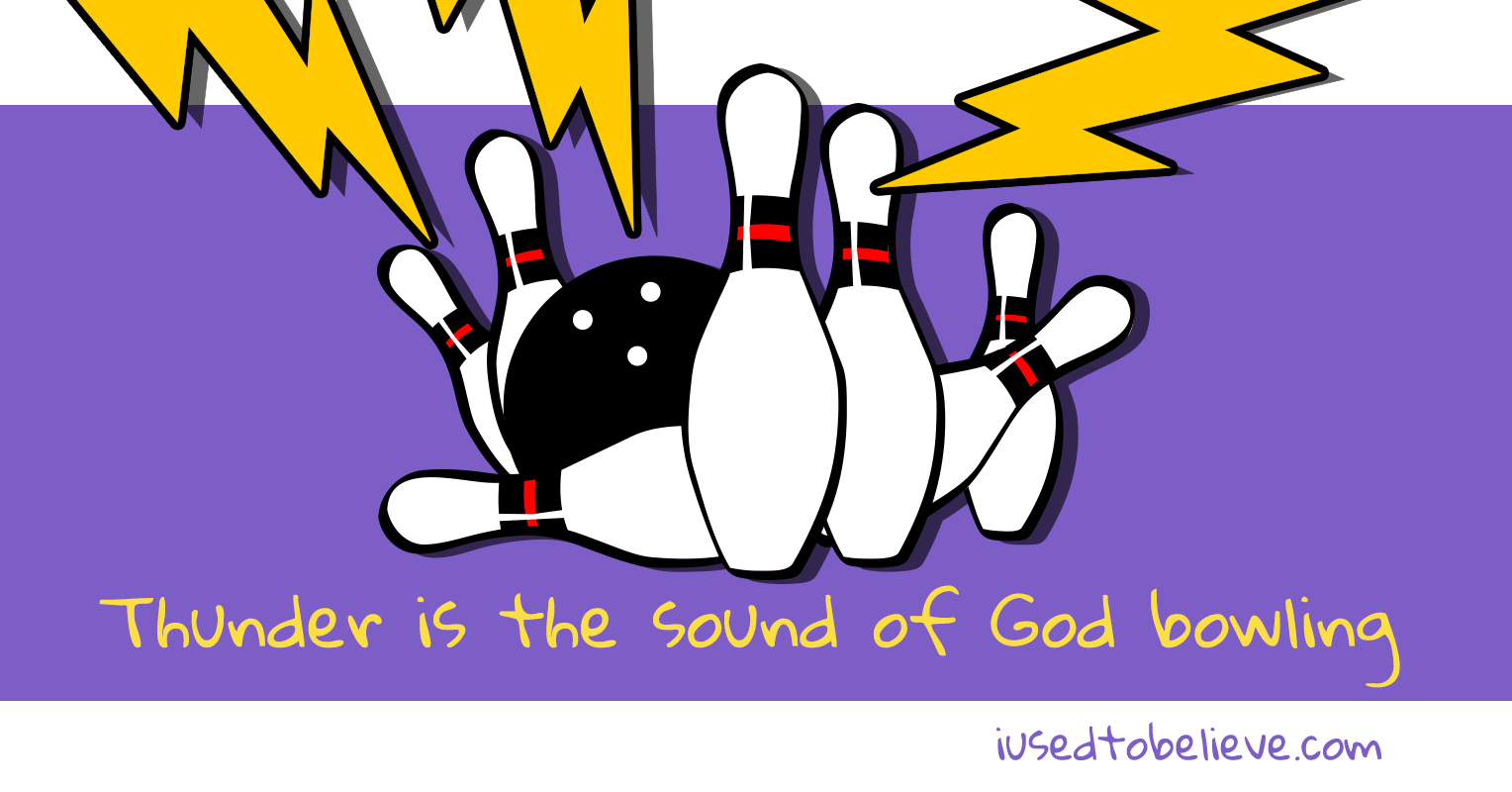 Show most recent or highest rated first or go back to thunder and lightning.

I always thought thunder was the angels in heaven playing bowling and lightning was the lights going crazy because an angel got a strike.

I used to believe that when it rained, god was either watering flowers or taking a shower, when there was thunder god was bowling and when it snowed god was rubbing dandruff off of his hair!(I was about six when I learned what really causes weather)

I used to believe that when it thundered,it was the angels bowling with Jesus, and when it was lightening, that Jesus got a strike!

When I was six or seven, thunder was obviously angels bowling on our roof. I thought it was very disrespectful of them, especially when they bowled at night when I was trying to sleep.

i was a bit frightened of thunderstorms when i was young. my mom told me not to be afraid because it was just the angels bowling. i used to have the most amazing visuals in my mind of angels in our local bowling alley.

When I was little I was terrified of thunder, so my cousin told me it was Jesus and God bowling...only we made it more elaborate than that. They were on a team against the Roman Gods (I had an obsession with mythology) and when Jesus won, the last bolt of lightening looked like a "J".

I used to think that when it was thundering outside it was the angels bowling and strikes were lightening. so whenever the lightening came, I would cheer for God. My mom thought I was a little strange...

when i was little i was terrified of thunderstorms my mom would tell me that God was bowling when it thundered and lightning meant he had a strike.. she also told me that the rain were the angels peeing. wow i love my mom. lol

I used to beleive that thunder was God bowling. The lightning was a result of hitting the pins so hard that they bounced and hit the lightswitch. We sort of went out of our way to avoid explaning the fact that the lightning(and lightswitch hitting) came before the crash.

I'd sort of like to know what people thought when they saw a bunch of little kids yelling at the sky, "Yay, God got another strike!" during a camping trip.

My mom always used to tell me that the thunder and lightening, that it was God and the spirits having a nightly bowling contest. Even to this day, I still like to think of this .

Strike and ur out!

My sister told me that thunder was God bowling, and rain was the audience (the angels) clapping. She said the big, loud thunder claps were when He got a strike and when it rained harder, the audience was cheering Him on to hit a strike.

My cousin told me when I was about 5 years old that during thunder storms, God was bowling and when it thundered it meant He got a strike. Also told me that lighting meant that God was watching fireworks.

When I was really young my mom told me that thunder was the sound of God bowling, and that when sun rays shone through clouds it was souls ascending from a graveyard.

I figured out the truth when I was a little older, and at that point swore that if I ever had kids I would look up the real answers to their questions rather than confuse them with nonsense.

I used to think that thunder was God bowling and the lightning was when He got a strike. Rain was also God crying and snow was God's dandruff.

I was terrified of thunderstorms when I was little. I'm still a bit antsy about them today. My parents taught me the story of god and bowling (which apparently many people have heard). But I was also taught if you killed a spider, then it would rain..

I used to believe that thunder was the sound of angels bowling, rain was when they were taking a shower, and lighting was when one of them was shocked.

When it was storming, the thunder was God bowling, lightning was the fireworks when He got a strike, and rain was angels crying because they lost. I like to still think this.

Thunder was my dead uncle in heaven playing a round of bowling with God.