This section contains beliefs all on a common theme: Factories make clouds. 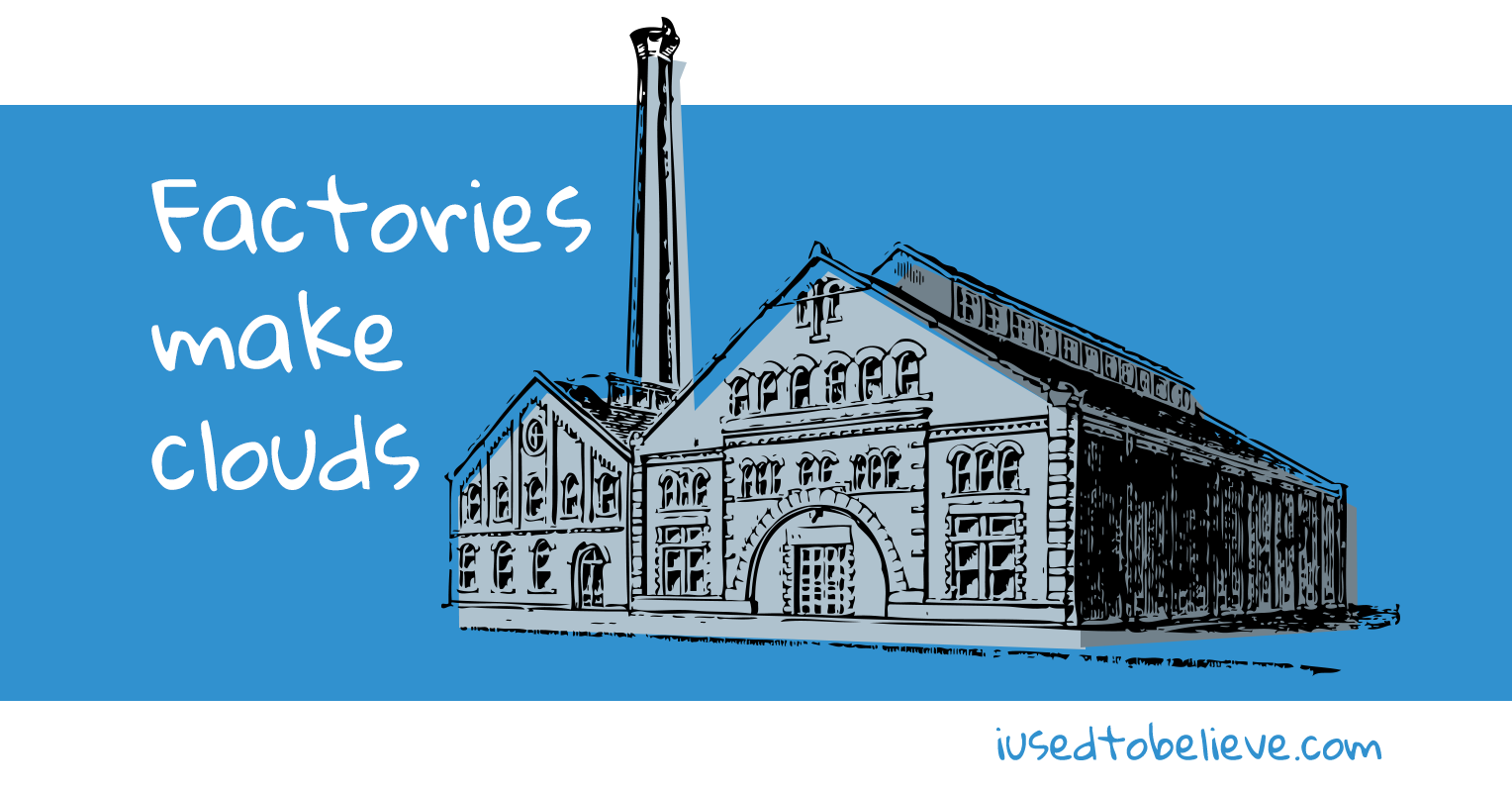 Show most recent or highest rated first or go back to weather.

I used to think that a large factory near our home was a cloud maker because of the steam that came out of it. I thought for a long time that some clouds were endangered so the people needed to help keep the number of clouds from going down. It wasn't until I was about 10 years old or so that I realized that it was just steam!

I used to believe that the coal-burning power plant in my town was a cloud factory, and they all just came out of the smokestack and floated up into the sky and all around the world.

When I was small my Dad told me that Power Stations were cloud making factories. I really believed him and got into a big argument with my teacher over it, ending up with 100 lines stating " I must not call my teacher stupid!"

When my three children were small, I told them that the cooling tower at the power plant was a cloud maker when they asked what it was by Lake Michigan that was spewing the large fluffy white condensation.

It warmed my heart to hear my daughter give the same explanation to my grandson and then several years later, him telling his much younger sister the same.

I used to believe that clouds were made from the factories in Hamilton, because of all the smog that spewed out of their towers.

I used to believe chimneys from factories made the clouds. I began to work out the truth when I saw a smoking chimney, but there were no clouds in the skiy

My Uncle Mike lived in a small town about 20 minutes from where I lived. Near the town is a coal power plant that has steam stacks . When i was little I thought that was what made the clouds.

I used to believe the smoke stacks at the Pittsburgh steel plants were giant cloud makers. I would always point out if they were making clouds that day or not and my parents never corrected me.

that Newport power station was where clouds were made. My dad is a known liar.

I used to think that the oil refinery in my town was where clouds where made as they seemed to be constantly emerging from the smoke stacks.

I used to believe that the lime kiln in town, which emitted huge, white, puffy clouds of smoke, actually made the clouds in the sky.

In my town we have a paper mill. The mill has smoke stacks to let of steam. Of course, this steam is fluffy and white so naturally I believed that this paper mill was the source of all clouds in the world.

Until 9 years old my sister used to believe that power stations (power plants to you yanks) were machines to make clouds. She never understood, when told how a power station worked, why it was necessary to make all that electricity at the same time.

My little brother once asked my mother when we past a couple of factories.. if the factories made clouds

I have always lived very near to a power station, and I used to believe it was a cloud making machine.

I used to believe that smoke stacks from buildings the expelled white smoke were cloud making facilities, and when I would ride past one I would watch them to see how many clouds they made in the sky.

When I was little, I believed that clouds came from paper mills.

I live close to Kodak and when I was little I used to believe that the smoke stacks made the clouds in the sky. I always got a huge kick of driving by the factory and seeing clouds being made.