The person whose birthday is earliest in the year is oldest

This section contains beliefs all on a common theme: The person whose birthday is earliest in the year is oldest. 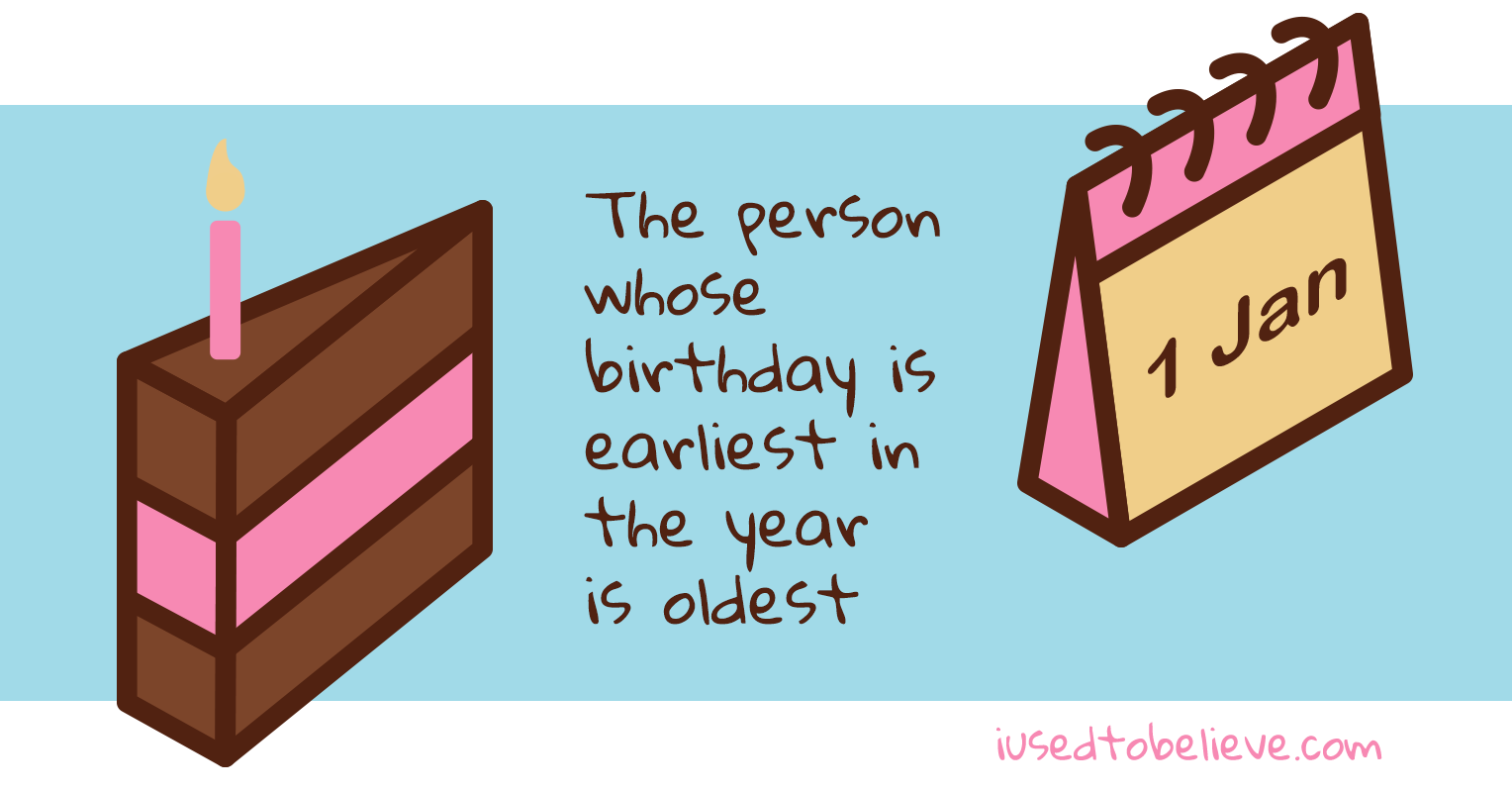 Show most recent or highest rated first or go back to birthdays.

my brother is 1 1/2 years older than me. im feb and hes july. i used to think that because i was a feb birthday that i was older. he tried explaining that it was the year that mattered but i didnt listen to him.

I used to say " my birthday is before her's ( my cousin) but for some reason she is older than me' her bday is the 31st of july and mine is the 12th.

i used to believe that my younger sis was older than me cuz her b-day was a month before mine. i believed that till i was 8 im 12 now!

Duffdog the obsessed with ferrets freak

I used to think that when I was a LADY I'd finally be allowed to be older than my sister (who's 2 years older than me). I was born in June and she was born in July, and I could never work out how she could be two years older, when My birthday was always before hers. Life's SOOOOOOO unfair!

I used to believe I was older than my sister, because she was born in May, I was born in March, so i kept telling everbody i was the oldest....

Just by coincidence, the five children in my family were born throughout the year, with the oldest being born earliest in the year on down to the youngest being born latest in the year. So it was my belief that the oldest kids always had their birthdays first, and the youngest last. I thought if someone was born on December 31st - their parents couldn't have any more children!

My little sister use to get into arguments with me becuase I was born in November and she was born in July and so she thought that meant that she was older. She was really 2 years younger, but she didn't understand the concept of years.

I never could understand why my brother was older than me when my birthday came first. My birthday is in April and his is in May, I just never understood that it mattered what year you were born in :0)

When I was four years old I believed that I was the oldest in our family since it my birthday was first in the year. Holding on to that logic, my father was younger than me because my birthday was 6 april and his was 23 april. I can remember I got very upset when my parents tried to convince me that this wasnt true.

When I was about six, I was (and still am) very close with my cousin, who is two years older then me. Well my birthday is in June and hers in August. I would get so mad when i told her I WAS older because my birthday came first and she would tell me i was wrong

My cousic used to think he was older than me because his birthday was in June and mine was in December.

My older brother's birthday is in June while mine is in April. When I was younger, I used to think that I should be older because my birthday was in an earlier month of the year than his.

Someone you don't know.

when i was young i thought i was older than my older cousin cause my bday was on the 12th of the month and hers was on the 31st and i told her "I should be older than you but for some reason in our case i am not" and she believed me too!

I used to believe that I was older than my brother and sister, because my b-day is in march and theirs are in september, and mine was first in the year, but they are really both five years older than me.

I was so convinced this was true that I had even taken the effort to figure out how there could be so many people who were older than my brother, even though there were very few days in the year before his birthday. As I figured it, once all the possible birthdays had been used up, January birtdays started again (which would take a long time based on the time required for birthdays to advance one month). This conveniently explained how my parents could have birthdays in the summer- they were way older than me, so they were on a different birthday cycle. My siblings and I were just lucky to have birthdays so early in the cycle.

I found out this was not true after being invited to my neighbor friend's birthday party. I knew she was a year younger than me, but her party was in early February- before my Birthday!!! I tried to tell her she had her birthday wrong, but she wouldn't listen. Her mother had to break up the fight and explain how age and birthdays really worked.

thinking to hard (even at 5)

As my birthday is in January and the first in the year for many family and friends, I thought I was the oldest.