Anon is a person's name

This section contains beliefs all on a common theme: Anon is a person's name. 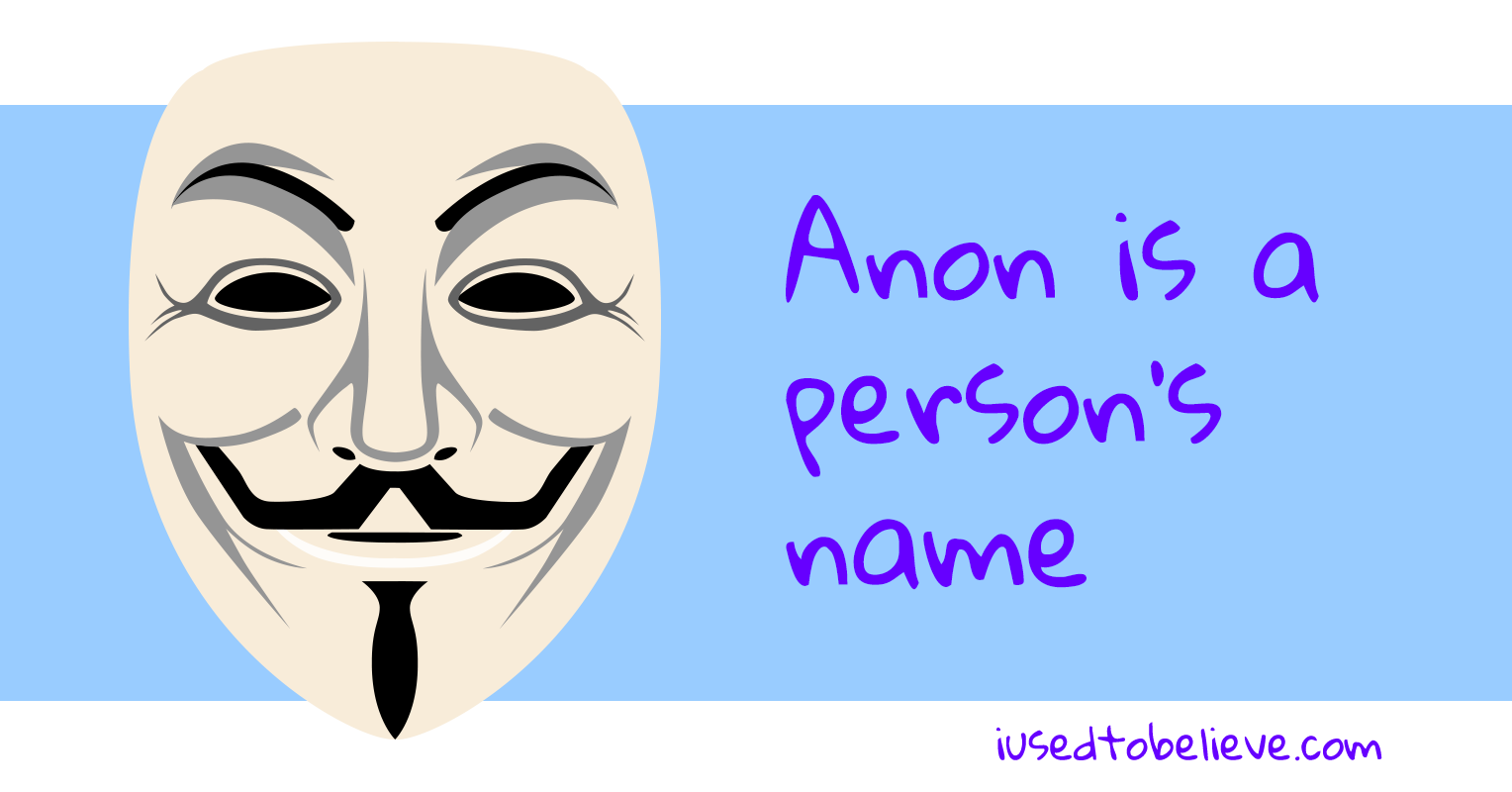 Show most recent or highest rated first or go back to names.

Because both the Super Mario and Cars franchises have characters named Luigi, I figured every franchise involving racing had to have a Luigi. I even made up a song called “Every race has a Luigi”

I used to think that Anon was a person.

First time i visited this site i saw that allot of beliefs are written by Anon ... I thought this guy is the owner of the site or something and making up stuff :)) ... but i realised is anonymous

I used to belive when someone types their name as "Anon" I thought it was really their name LOL I was all like "Hmm...there sure seem to be a lot of people named Anon.."

i totally have been thinking that a bunch of beliefs on this page were entered by this anon person, and i was like wow what crazy parents to tell their kids all these things then i figure out it ment anonymous. ya i am 22.

i thought Anon was a member of this web site; as if he was a moderator or administrator or something!! It never crossed my mind that Anon over here was the only person on the entire site with an account.

Until several seconds ago, I thought Anon was a name. I was browsing through thinking "Wow, so many Anons. I've never met one..."

I was reading through this site and I saw that someone named Anon had submitted most of the beliefs. I was thinking maybe they had created the site and were trying to make it have lots of beliefs on it. I saw that you could click on their name, so I thought I would go check their "profile" out and see if they were a moderator or something. I clicked it and up comes a box "This belief has been submitted anonymously."

I've been reading things on this site for about an hour now.
I kept seeing this "Anon" person post
And I was like,"Wow, this person is hysterical. But they have to be making up a lot of this stuff."
And I got confused 'cause I would see things be like,"As a girl..." and then sometimes say,"And being a boy..."
So I was like," ]:U What the hell is this person?!"

And then when I came to the 'people' section and reading some posts,
I realized.

I have been reading this site for a while now, and thought, wow, whoever "Anon" is sure posts alot, he must be making stuff up... It finally dawned on me. "Anon" means Anonymous!

When I first saw this website I thought Anon was a person who kept posted beliefs and I was getting really annoyed because I wanted Anon to leave space for the other people. I also thought Anon had no life. But obviously Anon stands for Anonymous

At first when I came to this sitw I thought Anon was somebody's actual name. I wondered how they could have so many weird beleifs. Then I realized that it meant Anonymous. Haha oops!

For the first like, 4 times I went to this site, I thought "anon" was a real name of a person! I kept thinking to myself, "Wow! Anon really believed in a lot of things!"

mind you, this only happened yesterday!!!

i used to believe that people can read my mind and that the government was spying at us at night (thats what that little beep i would hear was).I also just found out anon wasnt a real person .

I'm such a friggin' idiot-- I JUST, Litterally, JUST checked why this guy, Anon was special and was highlighted in orange. I kept reading all these posted by this ANON, well, I couldn't figure out why ANON was a girl for one post and a boy one down. I was afraid He/she was a hermaphrodite, so I clicked on the name... It said it was posted anonomously [ REALLY mispelled, but I don't care. I'm blonde or sumthin.

On this site when people sign "Anon" I thought Anon was one person who believed in a lot of weird things...

Slow to catch on.

I used to think Anon Was some guy that posts beliefs he finds around, but then later realized it means ANONYMOUS. 15 seconds later i did this.