The priest holding the services is God

This section contains beliefs all on a common theme: The priest holding the services is God. 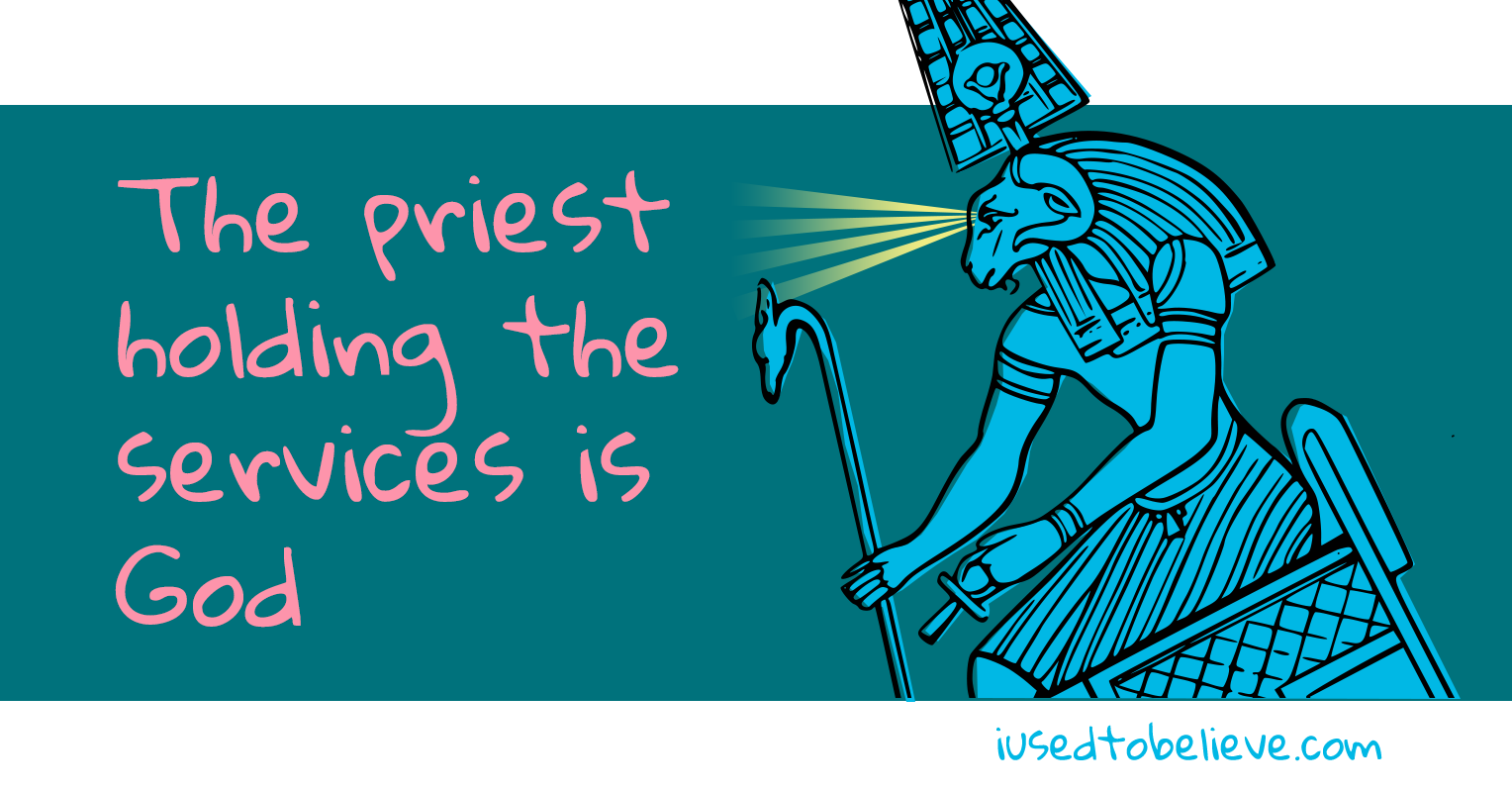 Show most recent or highest rated first or go back to church.

I used to believe that the priest was God because everytime a child cried, he wouldn't be talking.

My family went to church often when I was young. The minister would always talk about how the church was the house of God. This lead me to believe that the minister was God.

I believed when I was very little that the priest in our local Anglican church was Jesus. It's not like he was a disembodied voice whose source I couldn't see; I could see him perfectly well and he *looked* like Jesus. He wore robes and he had a friendly gentle face, hair that covered his ears, and a brown beard and mustache. Later I learned that he was actually Father Don.

Once I was little and went to church, I thought that the priest was god. I came home that day and told my mom "I went to church today and god talked to us!"

My sister used to believe that our Pastor was God.

When I was younger, I drew a picture of God and intended to give it to him, personally, at the next mass. After all, our priest was God. :)

When I was about 3 I used to believe that my preist was God. Whenever I saw him i would do the sign of the cross.

Growing up, we were taken to church every Sunday. I used to believe that the priest was God. That God came down from Heaven every Sunday just to say Mass and give us communion. When church was over and the priest left the altar, I used to yell out, "Bye, God!"

At church being catholic. when I was 3 I thaugt the preist was god . my mom later explaned to me that that was the preist.. ever scince then i have pictured god looking like our priest with black hair, partly bald, and with a beard.

When I was quite small, say about 4, and i used to go to church with my mum and dad, the priest used to speak into a microphone and there used to be massive speakers stuck in the 2 corners of the church. As i was little and the place was really crowded i was never able to see the priest and thought it was God himself talking to us through a radio and we could hear him thru the speakers!!

I used to think the priest at mass was Jesus. I asked my mom one Sunday if she could pick me up so I could see Jesus better and that was the end of that.

I was small (preschool) and couldn't see over the other adults, so I didn't know that there was a priest on the altar. I believed that the voice I heard was God.

For a long time I thought that God was actually giving mass. I was shocked when one day we sat in the first row and discovered that in fact a human priest had been speaking the whole time. I finally understood how people could doubt the existence of god... until then I just thought they needed to go to church to hear him.

A few years ago, I got out an old picture album to look at with my younger brother, who was 4 at the time. I would say for each picture, "Who's that?" just to see if he recognized everyone. We came across a picture of my priest and I on my first communion. I asked him who it was, and he responded shyly, "That's a picture of you and God."

I was raised Catholic, and when I was very young and would go to mass with my family, I thought that priests were really Jesus. There was a door in the wall of the church, and I thought that that was a waiting room and all the different Jesuses would just go and sit and wait for their turn.

I also imagined that the Eucharist would taste like JuicyFruit gum.

Two beliefs of my little brother-

Before he was old enough to understand religion, for awhile when going to church, he believed the priest WAS God.

My dad met Coronel Sanders in a plane once, and when I told my brother that the Coronel gave my dad an autograph, my brother said "Oh, I thought he gave dad a piece of chicken."

My fiance was in church as a kid and he saw the Vicar of the church and asked his Mum if it was God.

When I was growing up we went to church every Sunday. Often in the sermons the church was referred to as 'The House of God.' So I thought that we were God's house. I never realized that it was just a saying. I also believe that our minister (who was a woman) was God. I felt all special when she would shake our hand at the end of church. Later I learned that the church wasn't the literal house of God, and that our minister (or any religious leader) was God.

We have a very large church and the Priest speaks into a mic
to be heard by everyone. When I was very young, and too small
to see the priest up on the alter, I thought it was God talking at
mass. It only made sense. He would talk and people would say
"Praise to you Lord Jesus Christ".

When my sister was very little, before she could see over the pew in church, she thought that it was actually God speaking during the mass...