This section contains beliefs all on a common theme: Teachers live at school. 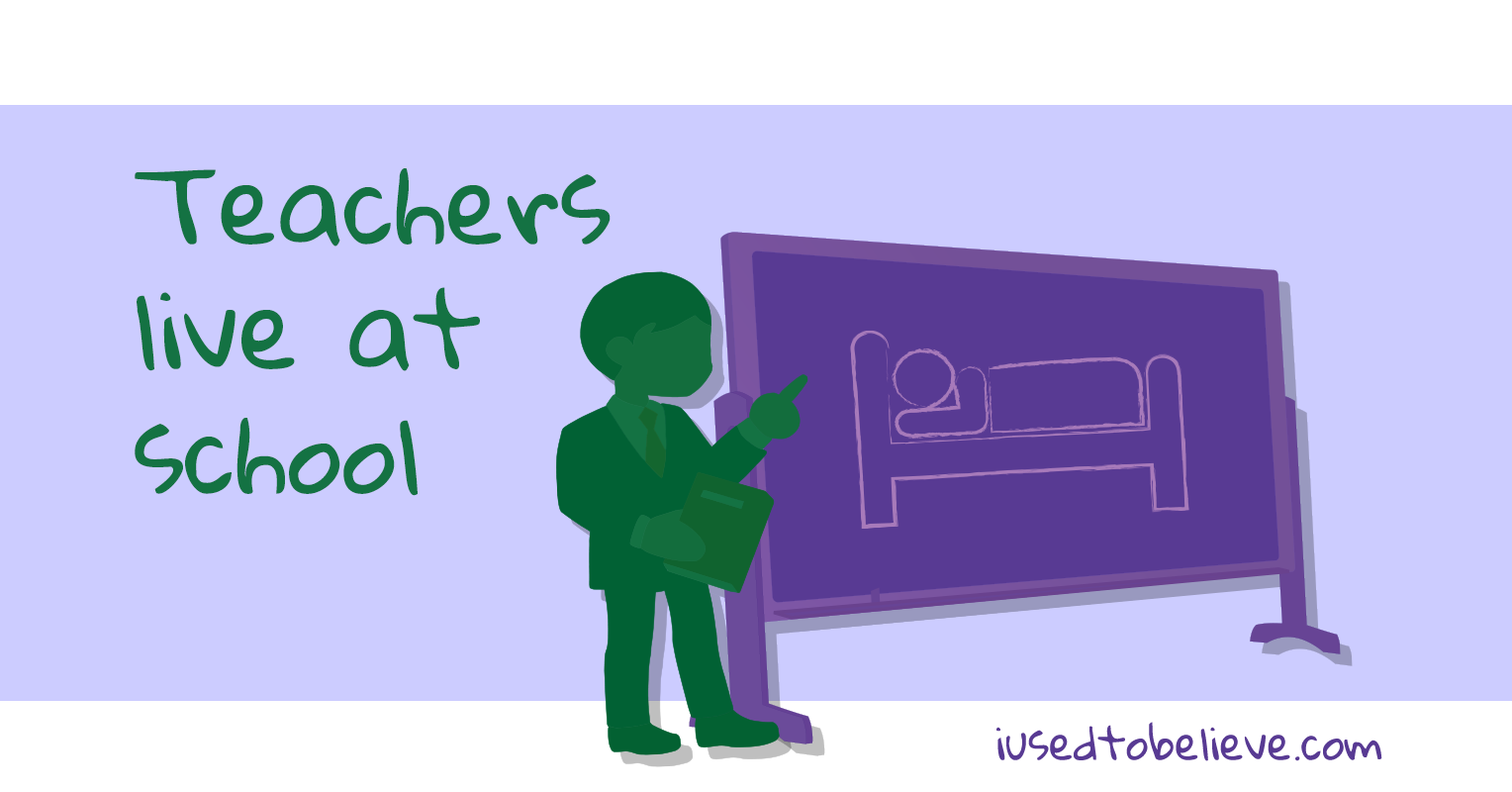 Show most recent or highest rated first or go back to teachers.

my little brother was shocked when his teacher asked him to get something from the store-room at the back of the class.he thought that it was her bedroom n that all the teachers slept at school in the night and lived in the staff-room!

I used to believe that all teachers stayed at school every night and threw slumber parties with the other teachers because for some reason my old school used to always smell like popcorn. It was wierd.

When I was in grade school, my friend told me that at night, the teachers slept naked on our work tables. From that point on I was always disgusted when we had to do a project at the work tables.

I used to believe my teachers lived in the classroom. It was a total shock the first time I saw one of them in a supermarket.

As a teacher, I sometimes have reason to call my the homes of my students. One evening, around 6:30pm I called to check on a student who had been out sick for a while. I told her that the class missed her and that we were looking forward to having her back. The next day, she came in and asked me where the phone was that I called her from. She peered around the room, apparently wondering where I hid it. It dawned on me that she thought I called her from the classroom and so I informed her that I called from home. She looked at me wide eyed and said, "You mean you don't live here?" Looking back, I remembered a time when I too believed my teachers lived in their classrooms!

When I was little, my Dad told me that teachers never left school. When I got there in the morning, they were there. When I left, they were there. One time I saw my teacher at Safeway and I said "What are YOU doing here?!"

when i was little i used to believe that the teachers never left school. they just lived there. even in the summer.

My old primary school had an upstairs that was out of bounds, and I was convinced that must be where the teachers slept.

When I was younger I thought the teachers lived in there classrooms and it would freak me out when I saw them outside of school.

i used to think teachers lived in the classrooms b/c they were there before you came and after you left.

I was absolutely sure that teachers lived at school. One day, my friends and I leaned down to the ground and heard noises from under the floor. We deduced that it was our teacher's husband watching football and eating popcorn (very detailed, huh?). We told her that we knew her secret, expecting her to be amazed at our detective skills. She cracked up. Still, I refused to believe it until I visited my first grade teacher at her house. I felt like a retard.

i used 2 believe thsat the janotor lived inside the storege closet because every day when i left school he'd walk in to there.And he always seemed to be at the school before me.

When I was about 7 I thought that teachers lived at school year-round. My mates and I would dare each other to look in the teacher's lounge to see if there were beds in there. We never did. Then one day I had to take a note to the teacher's lounge and i discovered no beds. I figured they were in the closet.
When we got to ask any question we wanted to the first thing that came out of my mouth was "Where are the beds? Why don't you live at home with your husband?" My teacher had hystarics. During confrence time my teacher told my mum and dad about my question. They cracked like eggs. OMG!

I used to believe that the primary school teachers would sleep in the classroom cupboards becuase they were there before I arrived and after I left.

When I was young like in 1st or 2nd grade i used to believe that the teachers lived above the ceilings of their classrooms or the hallways. So you can imagine my surprise one day when a) i saw the custodian and my teacher in her room on a ladder looking into the ceiling, i automatically thought that she and the custodian were married and lived up there and b) when the technician came and i asked him what is it like up in the teachers houses in the ceiling and he just laughed and patted my head... i later told my mom and she laughed and then told me the truth.

I used to think that my teacher lived at school until she came to school late one day. I was shocked!

When i first started school i thought that the teachers lived at school and slept on the bean bags in the reading area. I believed that until I was about nine.
Also when my older cousin was staying with us for a while he told me he was god, I was only three at the time and was especially nice to him from then on, (only when i shared the secret with my mum, was i corrected).

It never occured to me as a child that teachers lived in houses. I thought they lived at school...

I used to think that my teachers lived at the school and slept in the closets. although I found out that this was not true when I was 6, up until last year i still believed that teachers did not have social lives. When my study hall teacher said that he was getting married, I blurted out, "Oh my gosh you have a love life!?!?!"