Condom is short for condominium

This section contains beliefs all on a common theme: Condom is short for condominium. 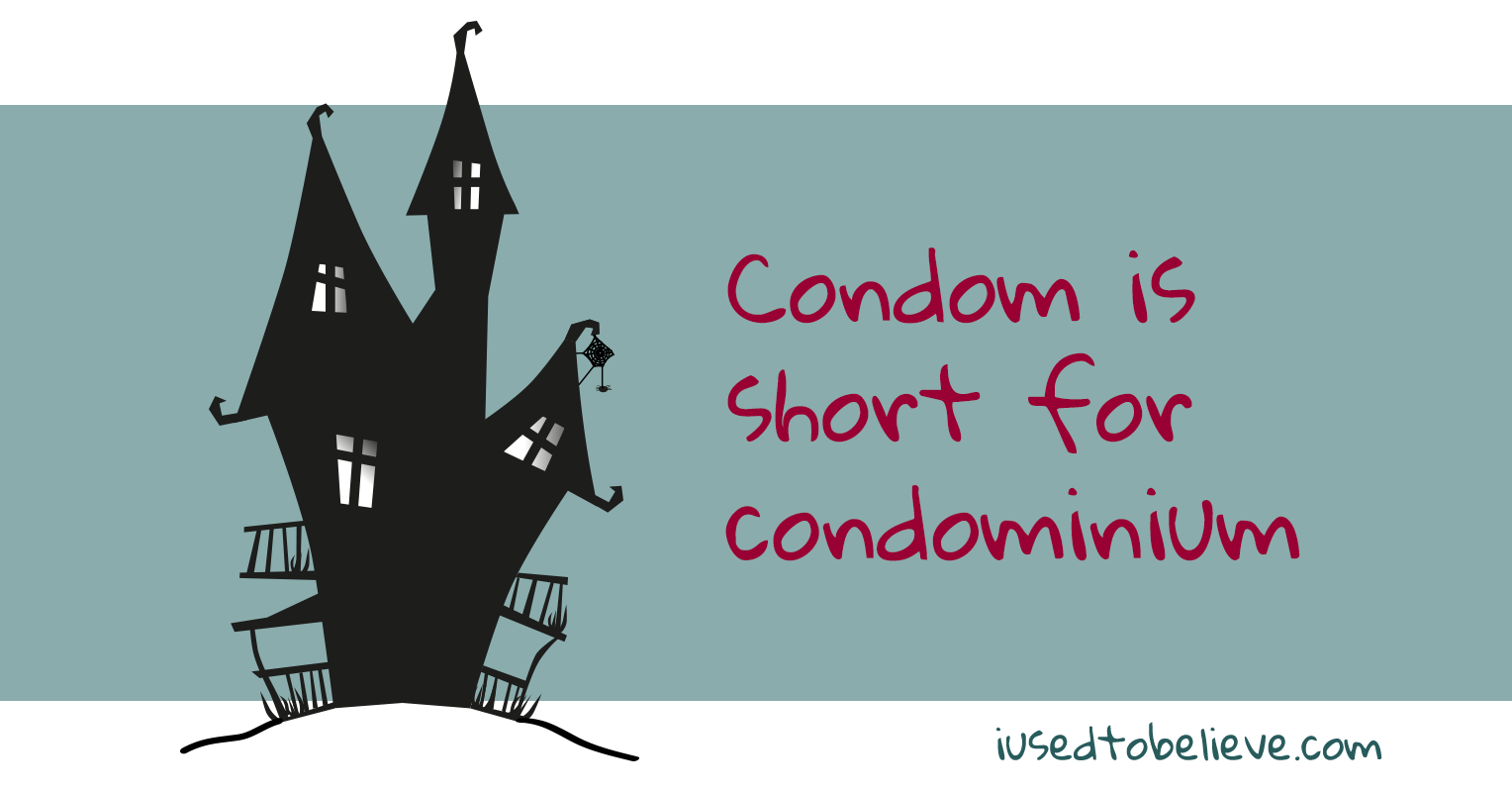 Show most recent or highest rated first or go back to condoms.

When i was about 6 my parents lost our house. So i tried to help them in any way a 6 yr. old could possibly help. So i told them about a "condom" that my friend lived in. When my dad asked me if i had just said a condom , i replied "yes she lives in a condom", my parents started laughing then they corrected me and told me i meant to say "condo". It all sounded the same to me back then!!!!!!!!!

ok when i was like four we saw a sign for condos (wich my grand ma lived in) and my parents started to talk about them and i joined in saying dosent grandma live in a condom and my parents cracked up. i was so embarresed!!

When I was at the age where you know a lot about sex, but don't want anyone else to know that you know, I would get rather embarrassed hearing people use the word Condo, because it always made me think of Condom, and I thought my mother would know what I was thinking about and shun me for life.

when i was 8 i thought a condom was a place you live in and a condo was the thing you put over your private-parts to prevent inpregatiing a women.

When I was younger, i was confused between the words condom adn condominium. When I went home for dinner one night i told my dad that I wanted to move into a condom!

I used to think that condom was short for condominium, so I said I was going to live in a condo when I was older.

When I was little and people asked me where I lived I would point and say "In the condoms over there." Later I found out it was condominium. No wonder I got those strange looks.

When I was younger, my 2 friends told me that they had seen a funny commercial about condoms (Trojan, actually). I had no idea what they were at the time, and just laughed with them, hoping they'd believe that I knew. When they asked if I had seen a commercial for condoms before, I panicked. I quickly assumed that condoms was short for condominiums. I told them that I hadn't seen any, but my aunt owned one in Florida.

You wouldn't believe how loud they laughed. I pretended it was a joke. They believed me, and later I found what out what they were from one of the friends who saw through my ruse. Ugh!

I used to get condos and condoms confused and we lived in a condo at the time, so when I saw a commercial for trojan condoms I yelled, "Look! It's like where we live!" After everyone had a good laugh my mom explained it all to me.

me and my friends were going skiing and we were staying in condos and we were with a church youth group and my friend called her mom to tell her we arrived safely but instead of saying condos she said "yeah these condoms are really nice! its gonna be fun for the next few days".

When I was like, 7 or 8 or so, I thought both "condo" and "condom" were both abbreviations of "condominium". I also didn't know what a condominium was either so I asked my mom, " Mom, what's a condom?" Lucky me, my dad was in the bathroom. My mom was like, "What? Oh, ummmmmm..." I never got my answer. Heh heh.

In 2nd grade we were studying spelling words and on the list and one of the words was "condominium" (i think that's how you spell it). I thought the meaning was the meaning to condom, and that it was just a typo. Soo...it got my turn and i had to stand up and spell then give the definition of condominium; i spelled it c-o-n-d-o-m. and said this for the definition, "i'm not sure what the meaning of condom is but you put it on hoses"

When my mum gave me the sex talk, she talked about how lots of people had sex just for fun, and not to make babies. I remember her using the word condoms, and thinking that this was an abbreviation for condominiums. I believed for years that as long as you had intercourse in a condominium, you wouldn't get pregnant, and that only people that lived in houses had babies. I didn't actually know anyone that lived in a "condom" so there was little to disprove my theory, until I got a better sex education.

When my best friend was 5 she could never remember what the thing was called where her grandma lived. Well her grandma lived in a condominium. Well she was talking to her mom and said "Where grandma live. you know that condom place?" she couldnt remember the wholee word.

I once asked my dad if we were going back to the condom. I was trying to abbreviate "condominium" and wasn't familiar with "condo". He told me that we were not going back to a piece of plastic that grown men put their penises in. He wouldn't explain why, and I was confused.

Later, during sex-ed. We were taught about nocturnal emissions (wet dreams). So I put 1 and 1 together and asked "so do I have to wear a condom all night so I don't wet the bed". The teacher had a baffled, but surprisingly straight, expression on her face.

I used to think that the shortened version of condominiums was "condoms". I could never figure out why adults laughed when we'd go to the city and I'd point out the big "condoms".

I used to believe that condoms were the same as condos. So when I would watch on t.v. someone asking for a condom I also thought they were homeless!

Once when I was little I was watching 90210 and in it the parents were having a meeting where they were debating wheather to give condoms to highschoolers. I thought that condom was short for condominium and that the rich beverly hills parents were giving houses to their children.

In the 2nd grade a more informed friend tried to tell me about condoms, I insisted she was wrong and they were like an appartment...I was confusing them with condominiums.