Brides become pregnant at the wedding

This section contains beliefs all on a common theme: Brides become pregnant at the wedding. 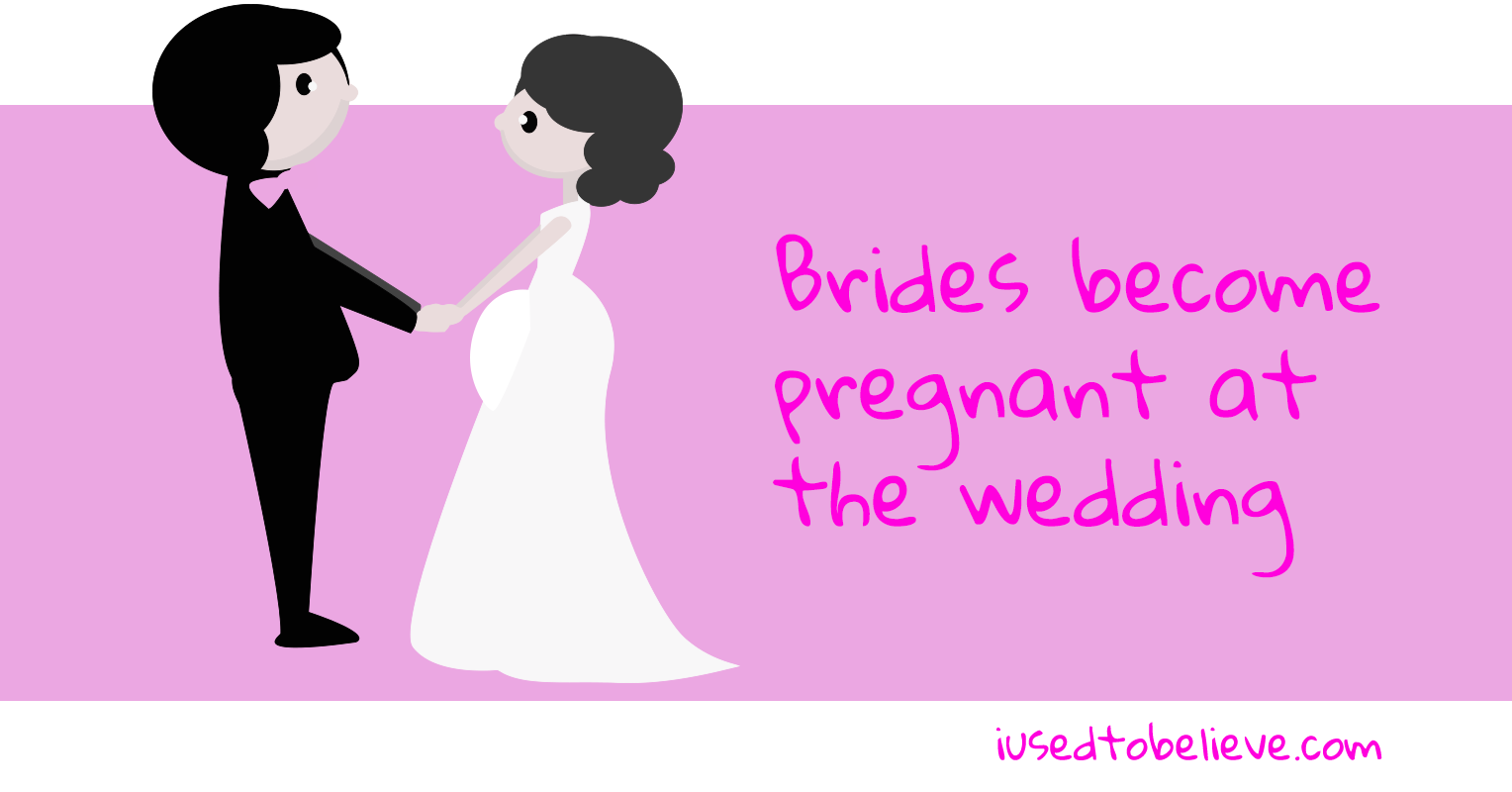 I thought that once you get married you immediately get pregnant

I don't recall at what age I learned the truth, but I do remember always thinking that right after a couple got married, they would hug and the woman would leave the alter with a full blown baby bump. I never actually thought of how it came out...but the hug is what got her pregnant, and only after marriage. haha.

I used to believe that whenever you got married, you were automatically pregnant. Oh the imaginations of toddlers :)

When I was little, I thought that a husband and wife immediately went to have sex in a designated area (like a shower) in the same building they were married in on their wedding day.

When I was little, i thought babies are born automatically after 9 months into marriage without couples doing anything. !!

I used to believe that as soon as a woman got married, she automatically got pregnant, and that the man putting the ring on her finger was what caused the baby to be conceived, so if the couple wanted another baby, the man would have to buy the woman another magic ring and put it on her and then she'd be pregnant.

I used to think that my dad proposed to my mom because he randomly came over to my mom's house as a stranger, and "found" her, then got down on one knee and proposed. I also used to think that brides would get pregnant once the grooms kissed them at the wedding. This is a really cool site :) what a great idea.

I used to believe that when you got married God put a baby in the girl's belly and that's how you got pregnant.

When I was like 8 I thought I understood how babies came about and how they looked similar to their parents. I knew after marraige came babies and that, to have kids that looked like the daddy too, there had to have been some transaction of something. Alas! The wedding kiss! Yes! when they have that special kiss at the wedding the mans spit gets in the ladies mouth. Yucky! And then the have a baby. But I thought "wait, what about those people have babies BEFORE they get married?" oh.. They musta had that special kiss before they got married. I thought I had it all figured out

When I asked my mom how babies were made, she told me that the cake at all weddings had special powers and by eating it the newly weds could make babies.

I thought that babies were made when people kissed at their wedding. I wondered if during that one kiss at your wedding, you had to like, inhale or something... to mix DNA. I was very scientific about it.

I never believed in the stork or anything. I used to believe that when a couple got married, the wife would automatically become pregnant.

When I was little, I used to believe that woman became pregnant when her and her husband kissed on their wedding day.

When I was little, I told my mom that women became pregnant during their wedding while they exchanged rings.Once the ring was on the finger, the woman instantly became pregnant. I wish that was really what happens...

I used to believe that a woman got pregnant when a wedding ring went on her finger. Somehow, the finger sensed the ring and sent a signal to her body to make a baby. I used to be terrified to let anything touch my left ring finger just in case it "got confused" and made me make a baby on accident.

In Hinduism, when a lady gets married, she wears a 'mangalsutra', or a thin necklace as a sign of marriage, just like rings in Christianity. I used to believe that's what got them pregnant!

I had about a half-understanding of how babies came to be; I knew that a woman had a womb in her lower belly and the baby grew there, but I thought that to get pregnant, a woman must kiss her husband at her wedding, after which time a ladybug from the man (no idea why a ladybug) would meet the ladybug from the woman in her mouth and travel down to the womb and jump into some swirling mass of baby making junk.

i used to believe that babies were automatically born after marriage

After a woman got married, I thought that they immediately got pregnant after the marriage...