This section contains beliefs all on a common theme: Serial killers are actually cereal killers. 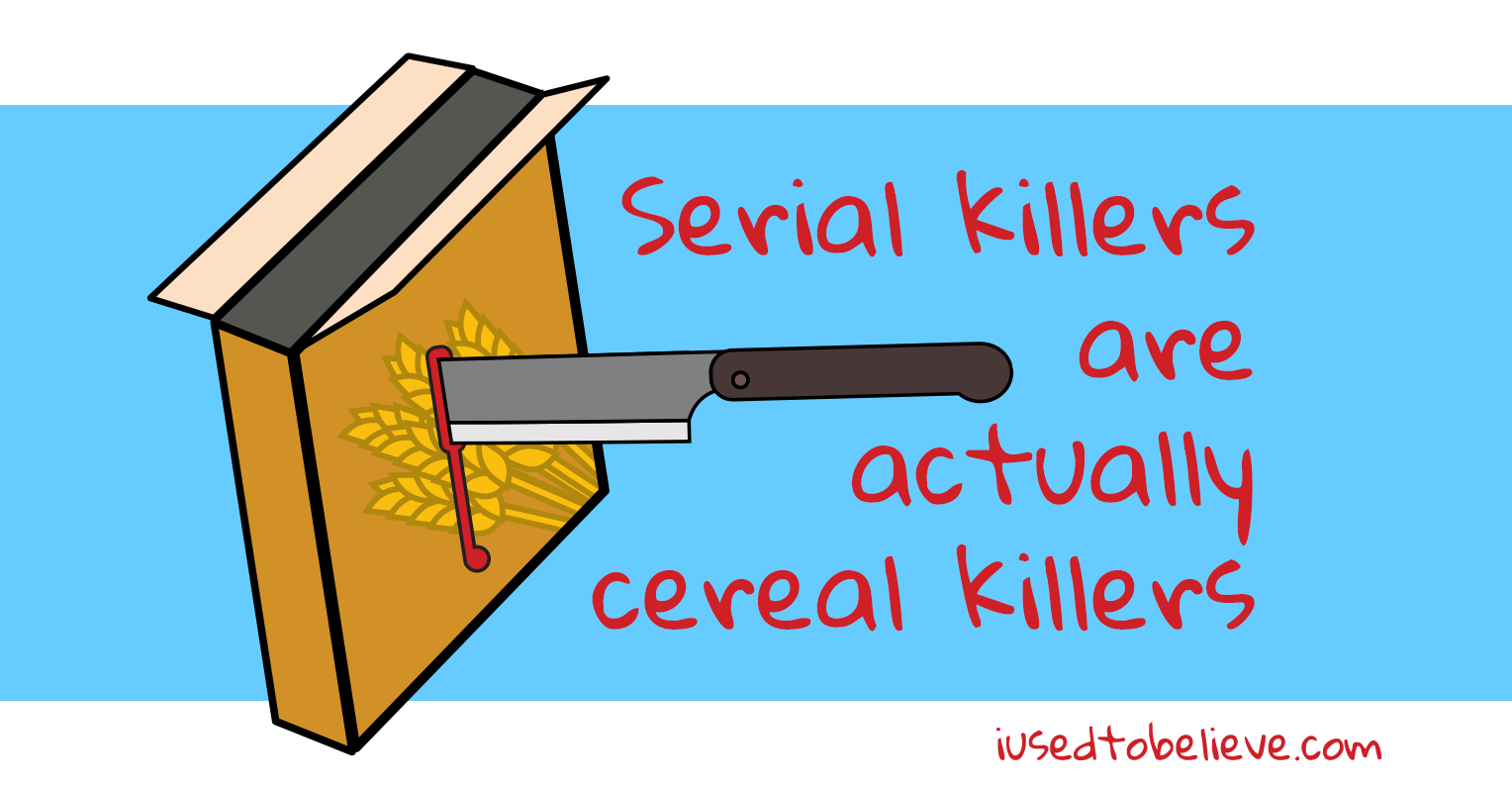 Show most recent or highest rated first or go back to criminals.

When I was little, I heard on the news something about a serial killer. I asked my step dad what a serial killer was and he said that they were people who killed people and put the bodies in cereal boxes, I beieved it too!

When i was about 5 or 6 years of age, I thought that a cereal killer was a human sized cheerio with legs and arms that hid on roof tops, and waited untill you were not looking and then kill you

When I was small, I believed that serial killers somehow killed people with breakfast cereal (choking them, beating them with the box, ect.).

I used to hear a lot about seriel killers when I was little. So I asked my dad what it meant. He told me that "it was someone who killed people the same way" I took this to mean that seriel killers would throw the same type of cereal at their victims to kill them.

When I was a little kid, I used to believe that serial killers killed people with cereal. They would concoct such vile cereal creations (fruit loops with toe jam and boogers) that people would die from eating them.

I used to believe that serial killers were "cereal" killers who wanted to kill children and would poison their cereal. This made perfect sense to me because I thought all children ate cereal and parents never ate the same kind. My parents didn't like buying the sugar-coated cereal for me and I assumed that this was because the frosting was easier to poison. If the cereal had no frosting, it would be soggy if it had been poisoned.

When I was little and heard the term "Serial Killer" I always thought it described a person who killed for "Cereal."

When I was little my sister thought serial killers stabbed cereal boxes because they didn't like the taste or something........you don't want to know what was going through her mind of what she thought a serial rapist was............

I used to think that Serial killers were people who poisoned cheerios.

When i was little i would hear on the news that another serial killer broke loose so i would protect my cereal boxes because i thought they would try to kill my cereal.

I believed serial killers were people who poisoned cereal to kill others.

My parents used to watch Americas most wanted when I was younger. When I was about 6 or 7 I remember hearing the word serial killer (home and friends), and thought that it was a person who killed people for their cereal. I was so afraid to eat cereal. Since my parents ate cereal, I was afraid that they would come after us to kill us while we slept.

When I was about six or seven years old, the infamous serial killer John Wayne Gacy was put to death. I couldn't understand why he recieved such a grim punishment, as I thought a serial killer was a guy who smashed boxes of cereal.

i used to watch america's most wanted and when john walsh spoke about serial killers, he was talking about people who either killed you with cereal, or killed you and then ate your cereal. i hid all the froot loops, convinced this would ward off a 'cereal killer'.

The first time I hear about a serial killer, I laughed. You can't kill cereal. It's not alive.

When I heard about serial killers when I was a kid, I thought they were saying "cereal" and I belived that my frosted flakes were in danger of being killed!