This section contains beliefs all on a common theme: The world was black and white before colour photographs and colour TV. 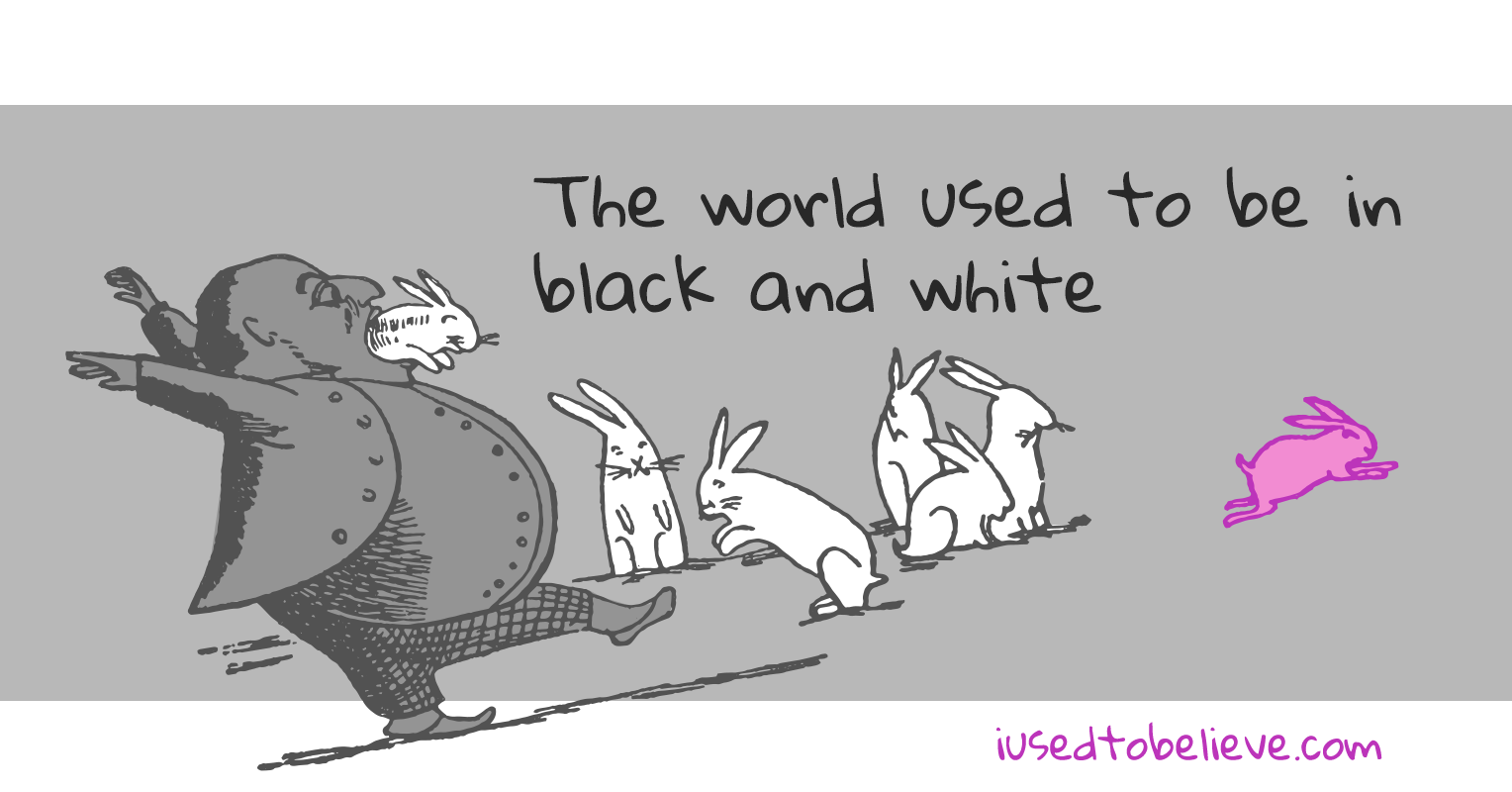 Show most recent or highest rated first or go back to history.

I used to believe that there were other colours, people just hadn't found them yet. I imagined it might look like a pattern. I would spend hours trying to think of this new colour while looking under rocks and behind chairs.

I was born right about when color film came along. Looking at my parents and older brothers and sister pictures, I thought that color happened when I was born. I felt so sorry for all of the people born before me, even their dogs were black and white.

when i was little i thought that "in the olden days" that everything was in black and white and that you had to buy color, and it was very expesive and it came in a box.

I used to believe that old movies were in black and white because color hadn't been invented yet back then. I was so sorry for all the poor people who had to live in a black and white world while I was lucky enough to enjoy a beautiful world of color.

i used to think the world was black and white because of old movies and photographs. i wondered what it must have been like the day the world became colour and what people's reactions were.

unlike most entries about black and white photots, I thought colour photos actually faded as time passed untill they wer black and white. the same went for movies.

Before the invention of the camera, everything looked like a cartoon with the quality/effect of oil painting.

After I saw the Wizard of Oz, I was under the impression Kansas was black and white.

When I was a child, I used to believe that the world was black and white a long time ago, because old movies and old photos were black and white. I used to wonder when did the world turn colorful or when was color invented and was thankful I lived in color.

Before kindergarden, I too thought that a long time ago the world was black and white. But that colours were invented one by one. All due to my kindergarden teacher saying "when I was little EVERYTHING was red!"...she was talking about firetrucks, and hats, and hydrants. I always wondered what colour came after red.

Like many others, I used to think that the world used to be black and white. I didn't question why dinosaurs were in colour, though.

Al's view of the world

Not a belief of mine, but something I got my son to believe when he was about 5.

We were watching the Wizard of Oz, and when we got to the part where the world changes from black&white (OK, sepia) to full glorious Technicolor, my son became a little confused by this.

Now, I'm a bit of a prankster (which is a bit like saying water is a bit wet) and I do so like a good story, so conditions were perfect for a wee spot of invention just then.

I told him what happened was the world used to be in black and white, but, right during the filming of the movie, the world changed to color.

My son was very interested in numbers, so he asked when the film was made. I told him "1938".

He thought for a second, and then said, "Didn't you say grandpa was born in 1933 ? That makes him the same age as me when the world changed to color."

After praising him for his awesome subtraction skills, I said "Yep. Grandpa was the one who told me all about it. You should ask him the next time we visit."

As luck would have it, my brother's daughter had a christening about a month or two later at which the entire extended family gathered.

"So, Grandpa, what was it like when the world changed from black and white to color when you were my age ?"

Needless to say, Grandpa was a tad confused, but #1 son forged on ahead, explaining how "well, Grandpa, when you were 5, that was 1938 because Dad says you were born in 1933, the world changed from black and white to color, and there's proof because the movie the Wizard of Oz was made in 1938, and you can see it happen right there. Dad explained it to me."

Oh, dear, I did have rather a time explaining that one away. #1 son thought it was pretty funny, but Dad was less amused.

after watching "the wizard of oz" i thought kansas was black and white and the rest of the world was color!

Like a lot of previous entries, I also thought that the worlds was once black and white, and when The Wizard of Oz came out, thats when it turned to color.

I use to think polka dot was a color.

I thought the world was black and white because of all the smoke from the bombs in Second World War.

When I was a kid I use to think that the worldonce was black and white. I asked my dad if that was true. He said that a long time ago that a big color storm covered the whole earth and brought color.