This section contains beliefs all on a common theme: Guerrilla fighters are really gorillas. 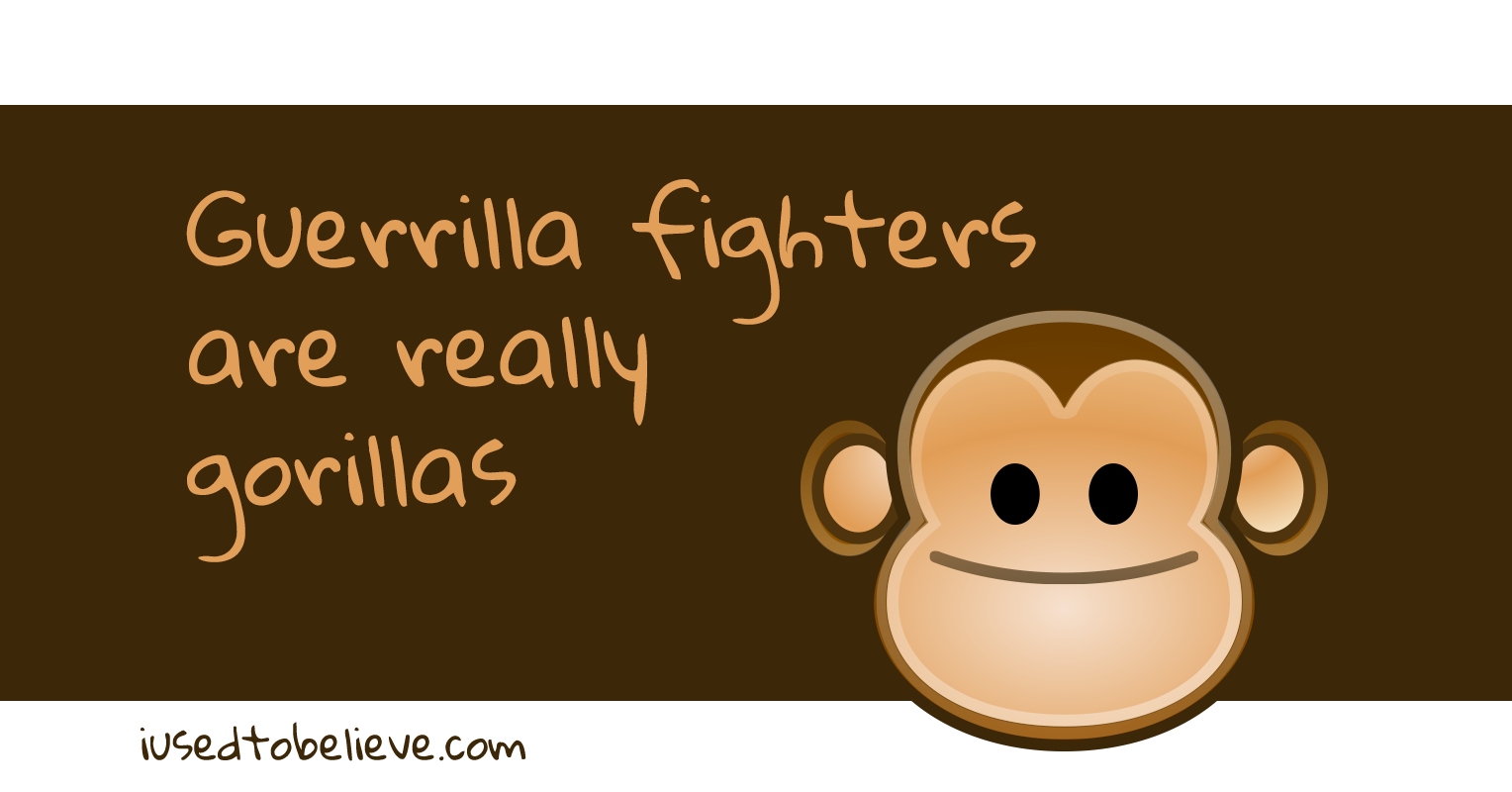 Show most recent or highest rated first or go back to wars.

I thought “guerrilla tactics” meant fighting like a gorilla— beating your chest and that sort of thing.

I also believed that guerrilla warfare was against real gorillas during the Vietnam war! This was also the time that the Planet of the Apes movies came out which just reinforced that belief!

When I listened to the news and the announcer talked about gorilla warfare in Africa, I pictured hairy gorillas with guns fighting. I wondered where they got the guns and who taught them to shoot.

When I was about 14, and I heard on the news that guerrillas were attacking villages, I said in front of a big group of family and friends, "Gorillas DO THAT?!". Needless to say, everyone laughed at me.

When I heard over the radio about Guerrilla Warfare in other countries. I believed gorillas were attacking people in their villages!

Me too,I'm from Africa and until I actually understood what "guerilla warfare" was,I was terrified to go out in the forest for fear of gorillas falling on me like I hear on TV and radio.

When we were 8-9 years old, my best friend thought guerrilla warfare meant they used actual apes. He even told our teacher, "Wow, those must be some smart gorillas!"

I grew up in the '60's during the Vietnam War.
I can remember hearing television new stories about the "gorilla warfare" going on and could just imagine the sight of actual gorillas jumping out of trees onto the soldiers!

I used to think guerillas were gorillas,so when i heard of a an attack by gorillas imagined lots of angry gorillas terrorizing people

I used to beleive that gorilla wars were fought by gorillas.

I remeber hearing on the news when I was a child that Tamil Guerrilas had attcked the Indian army. I was amazed that Apes had finally declared war on Humans ( I think I might have recently watched planet of the apes)

When I used to hear about guerilla warfare on the news I always assumed that in some parts of the world the gorillas were having a fight.

When I heard that gorillas were fighting in some other country I always imagined real gorillas and wondered why it was so difficult to stop them and why it was on the main news. Surely all animals fight from time to time.

When I was growing up as a kid (I'm 44 now), I always believed that we were fighting apes in Vietnam. It sounds stupid now, but at the age of six, I was always amazed that an enemy had figured out how to train "guerillas" to fight humans. According to Walter Cronkite, they were doing a pretty good job, too. My folks always wondered why I was never in any hurry to go to the zoo. If they could train apes, could the lions be far behind?

like many people here i thought that guerrila warfare involved monkeys. I have a good reason for this though. I was born in the early 90s, so wen i was only about 6 or 7 i saw tarzen, and i got scared out of my mindd when my brother showed me planet of the apes. a couple of weeks later, in a war encylapedia book i read vietnam was a jungle war with guerrila warfare. Since tarzan was in the jungle, i thought wen they shot the monkeys it was jungle guerrila warfare. i also thought in planet of the apes, that since it is in the desert, that is desert guerrila warfare like the persian gulf warfare. it never occured to me of the spelling diffences and the logic

When I used to hear about guerillas fighting in the jungle in nicaragua on CNN I always wondered why the gorillas were fighting people.

Whenever I used to hear the term "guerilla warfare" on tv, I thought that "gorillas" were starting fights with humans. I grew up during the time when "Planet of the Apes" was a popular new show.

When I was about six I heard the phrase Guerilla Warfare on the news, for a while, I believed that we should not have given guerillas guns, as they were already fighting to takeover the world like on the TV series Planet of the Apes, which I used to watch. Needless to say, my mother put me straight after a few months of believing this.

I used to believe when I was younger that it was ridiculous to bring gorillas to other continents to fight human wars for them, because I thought guerrilla warfare involved African gorillas. I was also worried it would make gorillas go extinct.