Cheques (checks) and cash from the ATM are free money

This section contains beliefs all on a common theme: Cheques (checks) and cash from the ATM are free money. 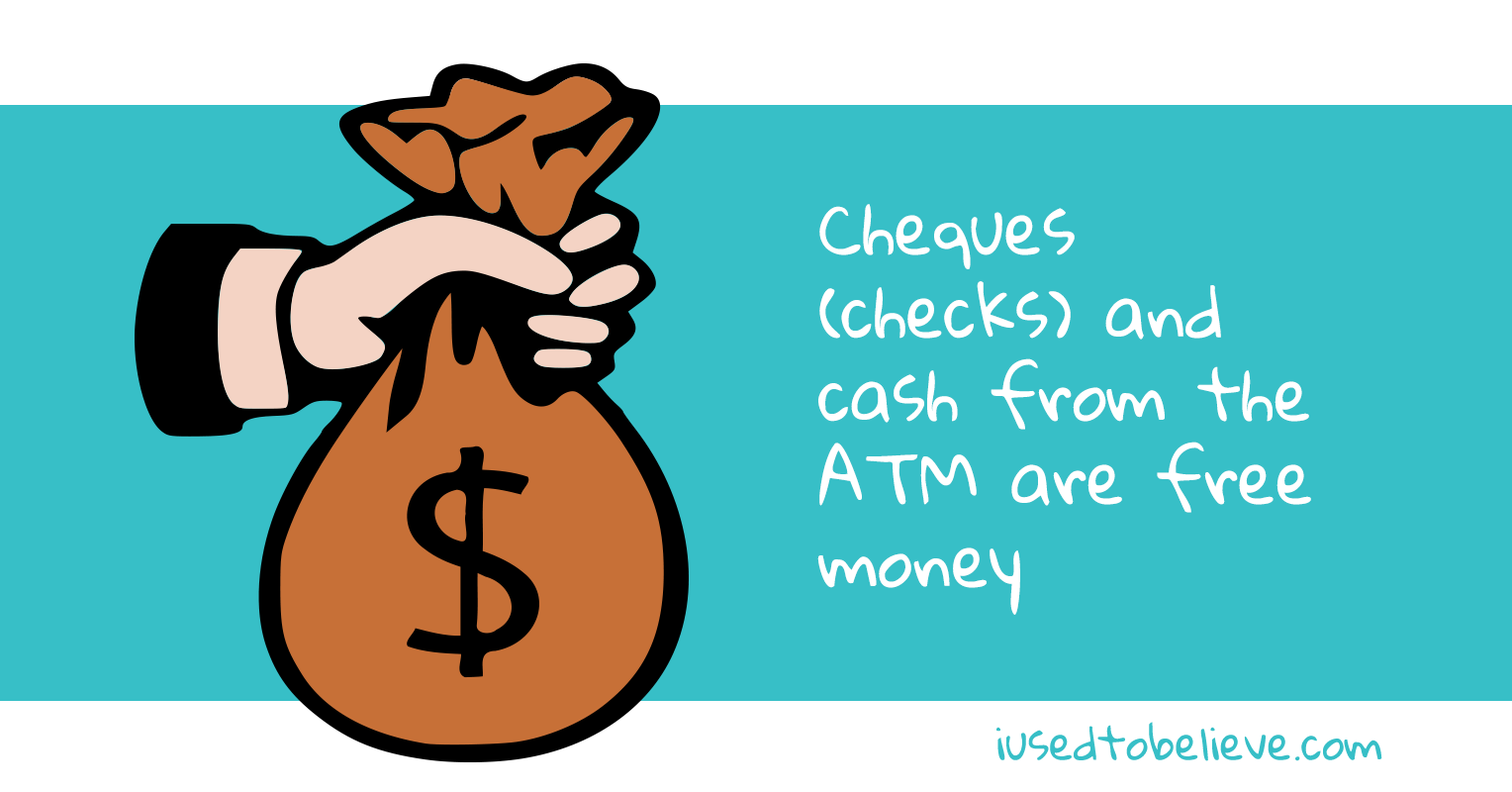 Show most recent or highest rated first or go back to money.

I used to believe that checks were like free money, that you could write 1 million dollars on a check and you'd have a million dollars. I used to ask my mom to buy me toys, and when she told me they cost too much, I would ask her to write a check!

I used to believe that cash machines gave you all the money you want. And I didn't understand why poor persons didn't want to use them.

I thought, if checks could be used to buy anything, then why did we bother with money? We were RICH, and my parents didn't even realie it! Cha-CHING! Not sure when I learned the truth, but it was bitter reality at it's best...

As a child, I used to think that there was a little man that lived in the ATM and handed (free) money out if you put your card in.

Once my mother corrected me as to this belief, I decided that there were hundreds of little tiny boxes in the ATM that stored all the different account's cash. You told the ATM which box to draw from, and then it pulled out money from only your box.

I used to believe that ATM machines just gave you as much free money as you wanted. Also, I had heard my dad talk about a "job" where he earned money. Therefor, I put two-and-two together and assumed that a "job" was where you took money out of an ATM machine. It confused me that he had to be gone eight hours a day to do this; when mom visited the ATM, it only took a few seconds. I concluded that mom was better at this "job" thing than dad, and wondered why she didn't go in his place every day.

My sisters used to believe that banks were simply where you got money from; if you're out of money, you simply to go the bank and get more. My father would once in a while complain about something being too expensive, and my sisters would tell him not to worry as the bank has plenty of money available for everybody. We told them it was not so... they finally believed us when they were about 12.

I used to believe that checks could be written for any amount of money that you needed. I would watch my mother pay for things with a check always for a different amount. I was awe struck,I would day dream about the many toys I would buy if I ever got one.I remember when my mom explained the concept to me. Reality is very disappointing.

I used to believe that you could create money (that you didn't previously have) by writing a check.

I used to believe that credit cards were free money. If things were tight financially, the credit card company would help you out. One time when we checked out at the department store and the total seemed high, I told my mom that she should just use her credit card so she wouldn't have to pay it. I didn't understand until later why the cashier and mom found that so funny.

I used to think that checks were actual money, and that you could get them for free, so I used to wonder why my mom didn't just get lots of checks and pay with things that way. I never understood why she would always sigh and say "I have no cash, I'll have to write a check."

i used to believe atms gave out money just by standing in front of one. when out shopping and mum or dad would say to me i couldnt have an ice cream id go stand in front of an atm waiting for money to come out.

I too used to think that you could just write a cheque if you ran out of coin and paper money, and didn't understand how you could ever have no money. I used to say that when I grew up, I wouldn't waste my money on the things my parents bought, but would buy lots of toys and lollies instead.

I used to believe that blank checks were money, and by simply having them you could write them for whatever amount you wished. My mother got very annoyed with me when I asked for a 0.25 paintbrush at a yard sale and when she said she didn't have a quarter I asked, "Can't you write a check?" I didn't realize that the money was in a bank account somewhere.

I used to believe when a cashier at a grocery store asked my mom "Do you want cash back?" that he was offering free money. I couldn't understand why my mom would ever say no.

When I was little, I used to think the bank would give people free money. I didn't know why everybody was so worried about money if they could just go to the bank and get it for free.

When I was younger I always saw my mum taking money out the ATM and I always thought that the ATM made money and you could take as much as you wanted!

I used to believe that as long as there were checks in the checkbook, there was money in the bank.

I used to think you could write an unlimited number of checks and you wouldn't have to pay for it. I would want my mom to buy something and when she said she didn't have any money with her, I would say, "Why don't you just write a check?". I didn't understand why people even used money when they could just use checks for free.

I used to think that money from ATM machines were free :p