Gunpoint is a place where lots of crime happens

This section contains beliefs all on a common theme: Gunpoint is a place where lots of crime happens. 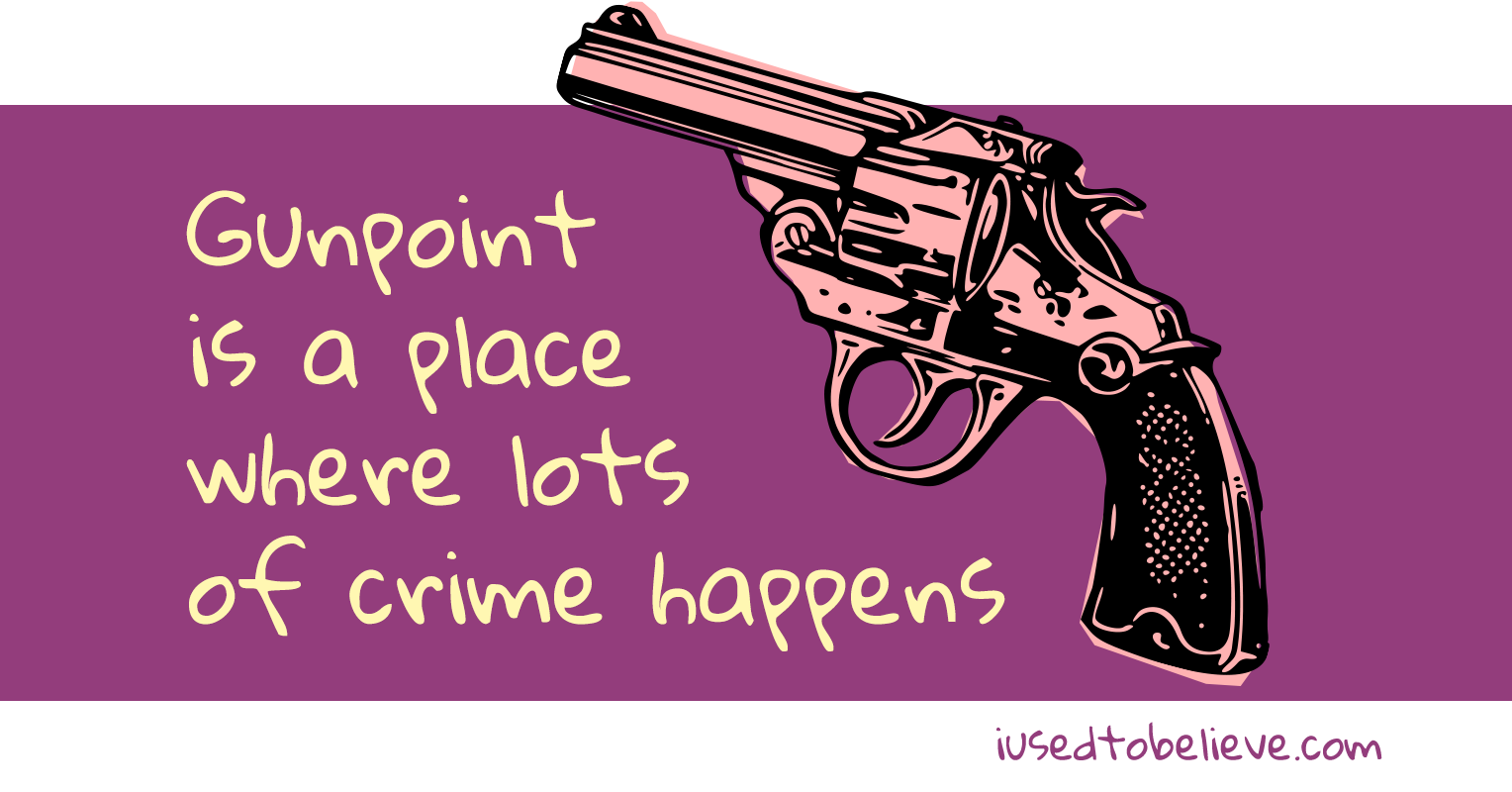 When I was a child, the only exposure I ever had to people shooting guns was the classic Star Wars movies. For years, I assumed that all guns shot colored bolts of laser light. It wasn't until I was much older that I learned that real-world guns shot bullets, and only sci-fi guns shot laser beams.

i used to belive that "gunpoint" was actually a place like - man held at gunpoint, shop robbed at gunpoint - i used to think that if it was such a bad place why do people keep going their

i believed up until i was about 13 (im 15 now) that gunpoint was a real place, i got this because the news was always saying stuff like "10 tourists were held at gunpoint today, later released by police" so i told my parents i wanted to visit gunpoint someday....they got kinda scared...

I used to believe that Gunpoint was a place. On the news, it always seemed to be addressed as one. "This man is held, at Gunpoint.", "Three hostages are being held, at Gunpoint." I mean come on, I was just a little kid, it seems like a pretty logical assumption.

I thought "Gunpoint" was a real town somewhere. I wondered why anybody would go there. People were always being "robbed at Gunpoint"...

when i was little i would watch the news with my parens, and it would say so and so was held at gunpoint. i would always hear that i and wanted to know why people were going to gunpoint. so one day i asked my parents if we could go to gunpoint. and there were shocked. they said why do you want to go to gunpoint? and i said well because they show people on the tv that go to gunpoint. so they had to explain what gunpoint was. i didn't want to go anymore...laugh out loud.... :)

You know when you watch/listen to/read the news and there is a report saying a man was robbed at gunpoint, or a bank was held up at gunpoint, meaning the criminal was using a gun. Well I used to think gunpoint was a place and kept thinking, "If all these bad things happen here, why does anyone ever go there. With all this crime going on you would think all the residents would have left by now."

when i was growing up i watched the news quite a lot,the phrase "held at gupoint" had me puzzled, i thought that gunpoint was a real place and couln't understand why people kept on going back to it.

I used to believe that there was a place called Gunpoint. Lots of times when my parents where watching the news, a report would come on saying that people were being robbed........at Gunpoint, I turned to my Dad and said "Daddy, I don't want to go to Gunpoint, people get robbed there" only then was the real meaning of the word explained to me. It's still a favourite story with my Mum

My firend used to to believe this when she was about 7. When she heard that the police have a bad man at "gun point", she asked why all the bad pepople keep on going there. She found out later that Gun Point is not a place.

When I was younger I used to think that gunpoint was an actuall place. Because you would hear in the news about a person being held up at gunpoint and terrorists are terrorizing at gunpoint and I always wondered why people continued to go there

I used to believe that Gunpoint was an actual place (i.e. town, city, state, etc.). If u think about it though, it's logical. "hostages held at gunpoint" "tourists held at gunpoint, then shot". I would always wonder why people would continue to go there.

When I was young and I was watching the news and heard that people died at gunpoint I always used to get made ask my mom "why do people keep going there?"

I thought that "Gun Point" was a place, like a camping destination or something. I couldn't understand why people kept going there if bad things kept happening at Gun Point...

When I was very young, I used to believe that there was actually a place called gun point, and could never understand why people were still going there, when the knew they would be shot!

My boyfriend used to believe that gunpoint was a place, he couldn't understand why anyone went there, they all got mugged.

I think that my sons who are now 19 and 22 watched the nightly news far too often as young children - one day they asked me very innocently - 'Where's gunpoint?" G'd Bless them - they thought that everyone held at gunpoint were actually in a town called 'gunpoint'!

My friend used to beleive that 'Gun Point' (as in "they were held at gunpoint") was a geographical place and wondered why anyone would ever want to go there!