Car signals tell you where to drive

This section contains beliefs all on a common theme: Car signals tell you where to drive. 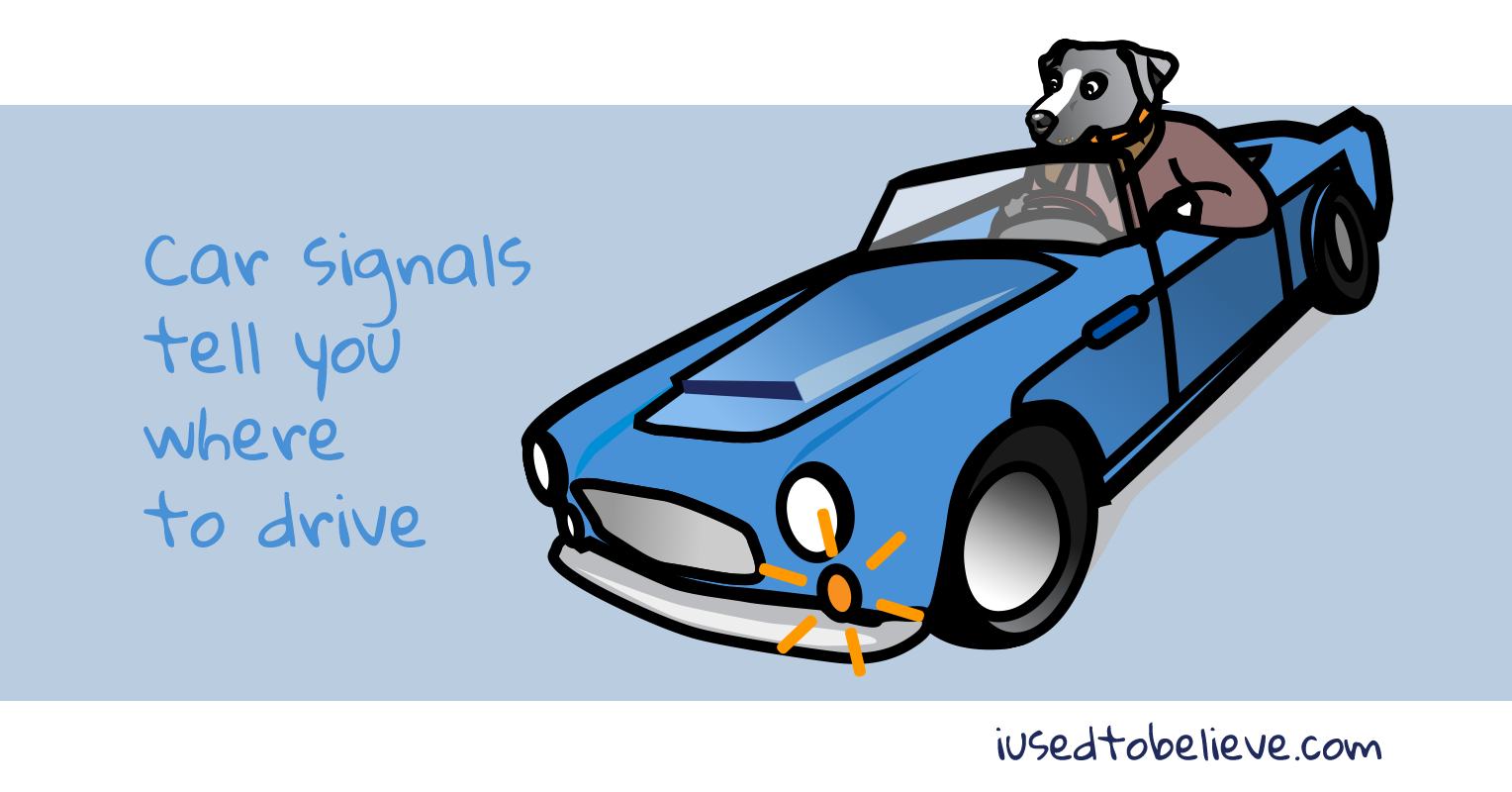 When I was little I believed that a car's turn signal operated all by itself. Whichever arrow was blinking you HAD TO turn that way. You must not disobey! And if you were running late for something and the car told you to go a different way, you'd just be out of luck. (Apparently it escaped my notice that the driver flipped a lever right before making the turn).

I used to believe that the blinker in your car always knew what direction you wanted to go.

my older sister convinced me that she could magically predict the way a car was turning because she had special powers. my heart was broken years later when i learned about turn signals.

I remember when I was little, and my mom would drive me to my Aunt's house every day before she went to work, that the car gave her directions on how to get there. I had no idea my mom was turning the blinker on.

I used to believe that every time a car was allowed to turn, the blinkers had to be turned on. So when my dad needed to turn and he didn't turn his blinker on, I screamed that we were all gonna die!

I thought when the blinker turned on in the car to turn right or left it had to read the driver's mind.

I use to think that went the turning signal came on, that the car somehow knew which was we were going (not that my mom was pushing a button)

When i was a kid i thought indicators in the car were for the person driving it and that the car was telling him where to go.
I never understood HOW the car knew in which direction we want to go.
Later i realised that the driver gives an indicator to the others driving on the road.
Took away all my 'car has a brain theory'.
:/

I used to believe that the DO NOT PASS signs on two lane roads meant you were not suppose to pass that sign. I could never figure out why my dad passed them anyway. I thought he was breaking the law.

When we would pass the signs that said "Watch for Falling Rock" my mom said they were posted because a little Indian boy had been lost. I believed this for a long time and loved looking for him when we passed the signs.

my dad managed to convince me that the indicators in the dash board of a car actually told you where to go.
Then i overheard my brother saying 'but i don't know how to get there' and i just told him 'don't worry, the arrows will tell you!'
if only..

That turn signals told you how to get somewhere! It wasn't till I was like 10 or 11 that I found out that the driver used a handle to make the arrow point in the direction they needed to go.

When I was little, I used to think that cars would read people's minds to figure out where they wanted to go, and that the blinker lights on the front dash was the car telling you where to turn, so you would get there. Then my mom showed me that there was a switch to make the blinkers go on, and I stopped believing that.

I used to believe that turn signals started flashing because the car already knew when and where you wanted to turn. So I asked my Great Grandpa how it worked and he told me. And I was really upset because I thought this for a long time

I used to think that the turn signal told my mom where to go.

I used to believe that the turn signal in your car would automatically go on whenever you were getting ready to turn. I couldn't figure out how the car knew you were about to turn. I finally concluded that you had to wave your hand to the side of the steering wheel to tell the car that you were going to turn, so it could turn on the little clicker thing. It wasn't until many years later that I realized that when someone was "waving" their hand beside the steering wheel, they were turning on the turn signal!

When I was little I used to think the turn signals were the car giving you directions I always wondered how the car knew where we were going.
Funny how we have gps devices now that do this looks like I was a very forward thinking kid.

When I was little, I would observe the turn signals on the dash while my parents were driving, and used to wonder how the car somehow knew which direction we were going to turn! It took me a while to realize they pulled the lever on the other side of the steering wheel.